This afternoon (Friday 8th July) there was a false alarm suspect package / bomb alert outside the Edinburgh IMC and Forest Cafe. 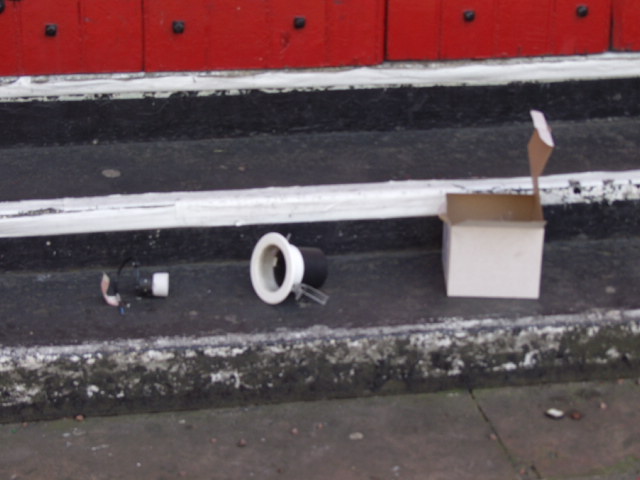 After the bomb blasts in London and false alarms here in Edinburgh, obviously there is a high sensitivity about any suspect packages.

This afternoon a car pulled up outside the IMC / Forest cafe and the passenger (young male) got out with a white box, tried to fumble it in the bin, then when he couldn't do that he placed it on the ground next to the bin, looked around and walked off at a fast pace. The car also sped away.

Those people outside who saw this all immediatly thought it had looked very suspicious, including just the way the young man had acted while doing it.

A bystander who had seen this immediatly moved the package across the street and to the corner at the end of the road, well away from the cafe. After the incident he said: "I moved it straight away because there were many people outside the cafe and just inside, and it had looked so suspicious. Given the guy had not treated the package with any care I had a look inside the top of it. Inside I saw a black and white cannister with two wire loops sticking out of it which gave me quite a fright. But upon closer inspection I could see that it was in fact a light fitting."

People from the Forest cafe had also seen the incident and discussed what to do. Realising it was not any real threat they didn't call the police but looked to find a police officer on the streets to report the incident to (to tell them there is no threat just in case anyone calls it in). Others were concerned that what they had seen may have been an attempt to stage a hoax bomb alert, which could have led to the street being closed for several hours.

As it was, it turned out that someone had in fact annonymously called in to the police to report a suspect package in the street...

So when the police arrived they pulled up in a car outside the Forest Cafe (two officers from Lothian and Borders). People then spoke to them and they were then taken down the street and around the corner to where the box and contents were laid out on the ground, and the witnesses explained what had happened.

It's reported that when the police called back to their HQ to update them they were told that it sounds like a straightforward false alarm and not to follow up any further, but one of the officers said he wanted to cover himself, check the street further and follow up a lead from the witnesses.

In the end officer A5593 took statements and left with the white box and light fitting.

So what was the real story?

Was it an attempt to set off a hoax bomb alert? Or was it just some guy throwing away an old light fitting?

Witnesses here say they suspect the former, given the weird way the car pulled away and the guy who left the box walked off, as well as the fact that the police turned up outside the Forest instead of where the box had immediatly been taken to.

What ever the truth is, I guess we'll never know.