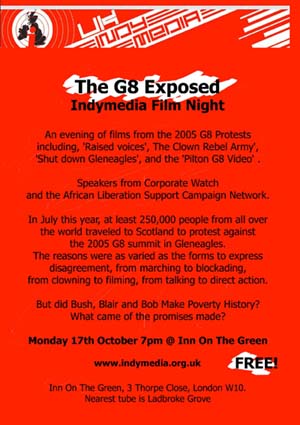 An evening of films from the 2005 G8 Protests including, 'Raised voices', The Clown Rebel Army', 'Shut down Gleneagles', and the 'Pilton G8 Video' .

In July this year, at least 250,000 people from all over the world traveled to Scotland to protest against the 2005 G8 summit in Gleneagles. The reasons were as varied as the forms to express disagreement, from marching to blockading, from clowning to filming, from talking to direct action.

But did Bush, Blair and Bob Make Poverty History? What came of the promises made?