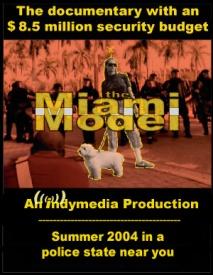 ‘THE MIAMI MODEL'(indymedia 2004)
Paramilitaries, Embedded Journalists and Illegal Protests. Many journalists and activists have come to refer to the police-orchestrated chaos and the ruthlessly efficient clampdown that accompanied the FTAA negotiations that year as 'The Miami Model'.

The INDYMEDIA G8 2005 NEWSREEL
When the G8 leaders came to Scotland this year, seasoned activists and concerned individuals from all over were ready to give them a big unwelcome.

And 'WON'T GET FOOLED AGAIN'(Pilton Video 2005)
A film of personalised video diaries and reportage presents Scottish youth-oriented views of the G8, poverty, debt relief, global warming, free trade, and Bob. Destroying the myth of apathy and lethargy in the younger generation.