Hangings Outside the Shell Centre for Ogoni Day

In November 1995, nigerian writer and activist Ken Saro-Wiwa and 8 of his colleagues, were executed by Nigeria's military regime for campaigning against the devastation of the Niger delta by oil multi-national Shell. Yesterday, activists from London Rising Tide and supporters dropped nine nooses infront of the Shell UK headquarters on London's South Bank to highlight the anniversary of Saro-Wiva's murder. The demonstrators also highlighted the current struggle on the north west of Ireland, where Shell is set to transform a remote conservation area in County Mayo into an environmental disaster zone which carries serious public health and safety implications.

In Aberdeen, Scotland, there was also a solidarity action with the Ogoni people, and in remembreance of Ken Saro-Wiwa. See Report and Photos. 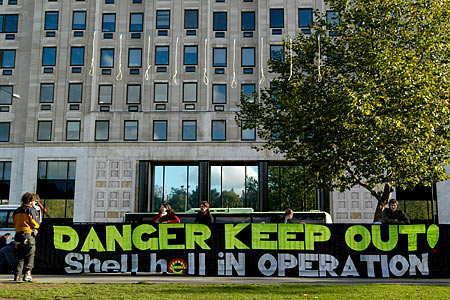 Shortly after midday, climbers scaled the lampposts outside the Shell HQ buildings on the South Bank, and dropped the nine nooses from a line between the posts. Other protestors arrived with huge banners, a megaphone and leaflets, along with a tiny but noisy samba band.

The action soon attracted the local security teams, a couple of overwhelmed community support officers, and then various police. Police used the new 'serious organised crime act' legislation which prohibits "unauthorised demonstrations" within an exclusion zone around Parliament. At first they claimed that the protestors could not demonstrate anywhere near to the Shell building, but after being shown a map of the exclusion zone, conceded that the action could continue on York Road at the front of the building.

They handed out many leaflets and educated passers-by of the real un-'greenwashed' reality of Shell. One of the participants was Terry Clancey who is visiting from the Irish Rossport Solidarity Group. He will be speaking at an event at Rampart on Saturday.

After a pause for some late lunch, it was off to the National Gallery, where Shell is currently sponsoring a Rubens exhibition. Visitors are charged £7.50 - £9 for entrance, but Shell offer free tickets to their special guests, and have held at least two banquets in the building, surrounded by the classic art of Rubens. As business men are treated to this sumptuous private exhibition, you can begin to see why Shell are so keen to sponsor this kind of thing - it fits in neatly with their greenwash slogan of 'profit AND principles'.

There is a Rossport Irish solidarity event at Rampart on Saturday 12th with speakers, videos and music.

The demonstration was speaking out against the ongoing destruction, exploitation and repression by Shell and other oil companies in the Niger delta and all over the world. The execution nooses were hung from the lampstands that illuminate the Shell Centre at night. Banners were unfurled, leaflets handed out and one activist spoke through a megaphone to explain to the public - and to Shell employees - the reason for the macabre installation above their heads. Police arrived and asked activists if they had applied for written permission to demonstrate, as the area was within the new Parliamentary half-mile no-protest exclusion zone.
Your correspondant left as the anti-demonstration was making its way round the building to the other entrance, apparently over half a mile outside the exclusion zone...