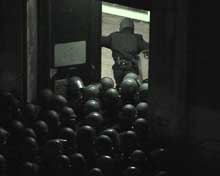 Wherever they are held, the G8 summits, the meetings of the 8 most powerful industrial nations, have a history of attracting campaigners and protestors from all over the world. There are the hard line protestors who believe that unless protest is radical (and for some violent) that nothing will be achieved, there are those who approach the situation with powerful humour and ironic messages such as The Clown Army at the recent G8 meeting in Scotland and those who subscribe to policies of non-violence. However I would argue that this is a simplistic view. At a forum where emotions run high and policing is tough and often intimidatory, any individual whatever their views can be caught up in situations designed by the authorities to contain, stamp out or prematurely end demonstrations. Reports at spike-online.com at the time of the G8 summit in Genoa in 2001 point out that "Condemning the 'mindless violence' of anti-capitalist protestors lets everybody off the hook - protestors and authorities alike." The G8 in Genoa saw arguably the worst violence of all summits, including one demonstrator shot dead. The right wing government at that time had an agenda of repression, intolerance and a determination to totally crush demonstrations. Finally 4 years later they now have a case to answer for the violence inflicted on many attendees at the Genoa G8 meeting in 2001..

I have been summoned to attend the trial as a witness in the Diaz Case. 93 victims and 75 police are involved. As an independent journalist for Undercurrents I gathered key video evidence and observed the horrendous and frightening events of the raid and the violent police action that night. My footage is crucial to the prosecution's case. The prosecutor's report issued in October 2005 emphasises that, "the powerful evidence of the videos and photos provided by journalists clearly disproved the official version. A large number of demonstrators are witnesses in the prosecution case, the horrors of that night remain strong in their memories and in some cases there is the legacy of physical violence. Interestingly three of the main witnesses, including myself, are British journalists. Bill Hayton of the BBC is the first of us to take to the stand. Bill is not covering this story as he is no longer an unbiased observer. Instead his report for the BBC focuses on his experiences that night, presenting both physical evidence in the form of his phone bill that showed the sequence of events and his memory of those traumas. "When I am asked to describe what I had seen inside the Diaz School that night - the large pools of fresh sticky blood on the floors - I feel almost as upset as when I had seen it the first time." We tend to think of reporters as hardy unemotional types able to maintain distance from the melee around them. In this case in the confines of that bloody battleground nothing could be further from the truth.

I follow Bill on the stand, I was luckier than most, observing and filming what happened from the roof of the Pascoli school next door. Even though there were rumours that there may be a police raid I found it hard to believe that they would attack what was essentially the media centre, a place full of mainstream liberal NGOs and Genoa Social Forum organisers. From my vantage point that night I saw the police run like a swarm of insects into the courtyard. There was no resistance. Instead I heard screams, and saw the police smashing windows and doors. Then police entered the building I was in, and I encountered a large riot cop in full body armour baton in hand puffing up the stairs. I ran upstairs where I and a fellow journalist were able to hide in a water tower. Luckily we were not found when police searched the roof of the building. Fear from adrenalin made my camera grip a little shakier but the motivation to capture this indiscriminate violence kept me recording. The scanning of the building by helicopter searchlights went on for three hours. Interviewing some of those victims years later there is in some an element of relief that the trial has started but still a huge burning desire for justice. The painful memories of that night surface easily in interviews I filmed in Genoa last week. For many, despite it seeming like an open and shut case there is fear that justice is still far from their grasp. Mark Covell, one of the victim, said: "The evidence is so overwhelming it's like a dam that's going to break...". The high-ranking officers accused may benefit from a new statute of time limitations introduced by the current Italian Prime Minister, so in fact the trial may never be completed.
Covell, an Indymedia journalist, was one of the most beaten in the raid. His injuries included the loss of 10 teeth, eight broken ribs, a broken hand and a shredded lung. He tried to tell them he was a journalist, and the reply came, in English, "You are not journalist, you are black bloc, and we are going to kill black bloc.” Mark was attacked on three separate occasions on that night. He was defenceless throughout, kneecapped, kicked in the spine. When he was attacked for the final time outside the school he thought he was going to die. My video footage of that third attack confirmed that its intensity was what Zucca the prosecutor described as "gratuitous and brutal." According to Zucca, the arrests following the raid "failed almost entirely to stand up to initial judicial scrutiny". We are hopeful that our solid graphic evidence will help to consolidate the prosecutor's case. The web of police corruption and deception was further emphasised in the testimony of one of their drivers. He claims that petrol bombs shown in footage on Prima Canale TV were actually found elsewhere in the city and planted in the school.

In the trial of a larger group of 45 police running parallel with the Diaz case, detainees allegedly abused at Bolzanetto prison testify forcefully that 29 officers and their seniors are guilty of inflicting indiscriminate violence during the attack on the school itself. The detainees were trapped with no chance to escape and even when on the street were subjected to further violent attacks. In the words of the prosecutor, “individuals who were in the school whether by chance or entirely legitimately were deprived of their liberty." Illegitimately arrested, and, from what I myself witnessed, beaten and terrorised.