Today 40 activists fom Rising Tide, Rhythms of Resistance and other groups shut down a Shell petrol station in Islington, London in solidarity with the International Day of Action against Shell's onshore pipeline in County Mayo, Ireland. 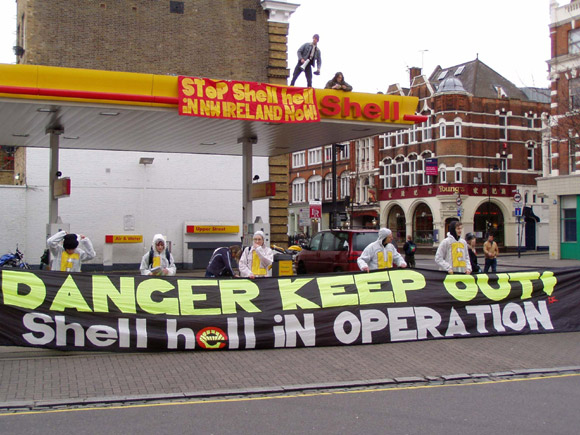 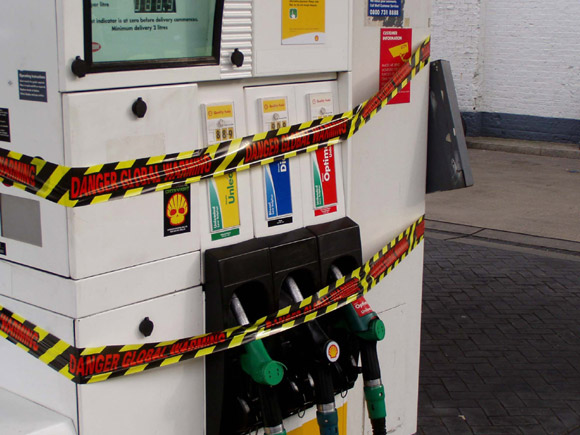 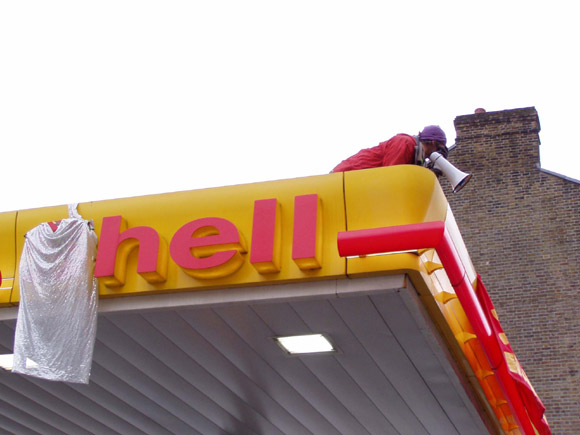 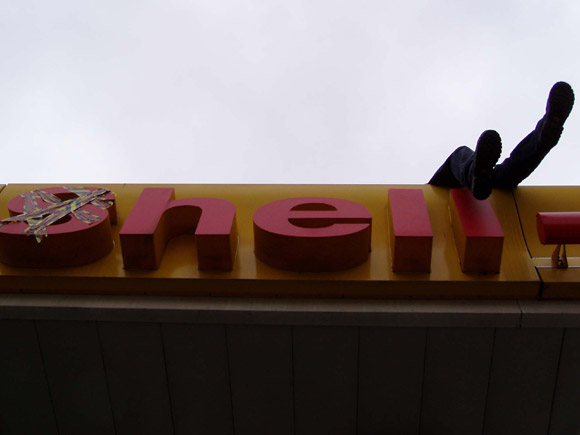 Who's feet are those? 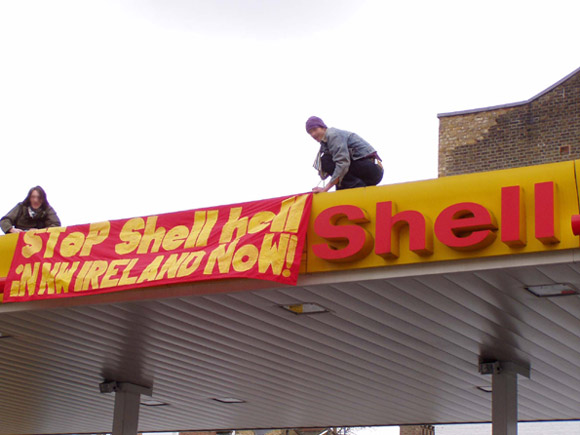 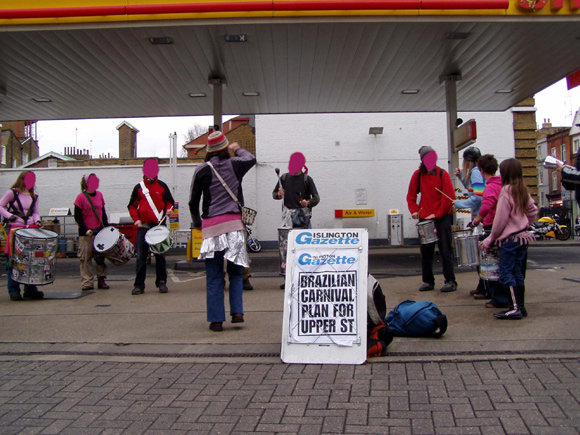 Activists successfully shut down a Shell petrol station and sections of Upper Street in Islington, North London for four hours this afternoon. Two daring climbers scaled onto the garage roof and hung a banner reading Stop Shell Hell in North West Ireland Now, whilst others blockaded the entrance wearing white biohazard suits spelling out Shell Hell. Rythms of Resistance blockaded the other entrance with full blown samba rhythms. The petrol pumps were sealed off with 'caution, global warming' tape and a huge banner was held across one entrance saying Danger, Keep Out, Shell Hell in Operation. There was loads of interest from the public passing by who stopped to look on, dance and support the action. Two and a half thousand leaflets were given out. Along with hundreds of cars who were unable to fill up today, several supermarket lorries turned back in confusion, unable to get their oil fix to deliver the goods on time.

The cops were there with their mobile cctv unit and fit team as usual but kept their distance until the roof dwellers tried to come down. The activists were attempting to protect the climbers as they left the roof, when around forty cops charged around the corner and contained everyone in against the side of the garage. One girl was violently arrested as the cops pushed and shoved people against the wall (but she was later released without charge). People were then contained under section 50 and told to leave but that they would be arrested if they didn't give their names and addresses. Concerned with protecting the climbers on their descent, activists stayed put until they were safely on the ground. Shortly thereafter the two climbers were snatched from the group and nicked. Detainees left one by one after being forced under threat of arrest to give a name and address to the cops and blinded by the police camera for photos.

Earlier today a critical mass of over 30 bikes and a mobile sound system rode through Nottingham highlighting the evils of Shell to motorists and passers by. Hundreds of leaflets were handed out outside of the Shell petrol station forecourt on Woodside road and the A52. The entrances and exits were
blocked for over an hour.

Yesterday Shell's headquarters in Dublin were blockaded by bicycles and supporters of Rossport's campaign to prevent a dangerous, high-pressure pipeline being built through their community.

Below is the Press Release for the London action which was sent out this evening and more information can be found at:

Activists shut down a Shell petrol station in North London today as part of an international day of action against a Shell-led gas pipeline and refinery development in County Mayo, Ireland.

The activists blockaded the entrance and exit to the forecourt, disabled the petrol pumps with ‘Caution Global Warming’ hazard tape, and hung a banner from the roof of the garage reading ‘Stop Shell Hell in North West Ireland Now!’ The petrol station was shut all afternoon, and part of Upper
Street was closed off to traffic. The carnival-like atmosphere provided by a noisy samba band came to an abrupt halt as police contained the protesters, who were attempting to leave peacefully. Three of the activists were arrested.

The international day of action was called to draw attention to the struggle to stop the construction of a gas pipeline and refinery in County Mayo, which would transform a remote conservation area of outstanding natural beauty into an environmental disaster zone with serious public health and safety implications.

The pipeline and refinery will poison the area, threatening the safety of the residents who live just metres away, endangering the marine environment and destroying livelihoods based on fishing. Shell’s plans are
fully backed by the Irish State, which used compulsory acquisition orders to give Shell access to local people's lands.
(www.londonrisingtide.org.uk, www.corribsos.com)

Local residents and people from across Ireland are fighting back, and in 2005, five Rossport residents were jailed for 3 months for attempting to prevent construction workers from entering their land. Last summer, residents and activists set up a protest camp on the site of the proposed pipeline and prevented construction by shutting down both the pipeline and refinery building sites. Work on the project has still not begun, and the camp is seeking as many people as possible to join them this summer to stop Shell again.

The battle in Ireland is just one of many struggles against Shell’s environmental and human rights abuses around the world. Shell’s oil empire is also making a huge contribution to climate chaos, trading over 14 million barrels of crude oil equivalent every day. The company’s recent record profits of $23 billion come only at the expense of massive damage
to the climate. (www.risingtide.org.uk)

The activists were from Rising Tide, Rhythms of Resistance and other groups.

the two men who had been on the roof of the garage were finally released a short while after 2am on sunday morning. they are released on police bail and have to reappear at islington police station in march to hear whether they will be charged with criminal damage.

they were questioned at length about the incident, and asked whether they had put stickers on the petrol pumps at the garage, to which one of them replied "do you really think our arms are that long?"

the good news for those on the ground is that presumably the police have no idea if anyone involved in the action did actually sticker the pumps, otherwise i am sure they wouldn't be asking such ridiculous questions to the very ones who couldn't possibly have done it.

apparently, and i'm open to correction on this, a 'section 50' relates to 'anti-social behaviour' and requires that a police constable witnesses behaviour that is anti-social - this then gives the police power to demand name and address and if they are not satisfied of its veracity, date of birth. failure to comply can lead to arrest. some of the detainees yesterday asked which constable had personally witnessed them taking part in 'anti-social' behaviour, and the same forward intelligence team constable came forward for each - he must have had fantastic powers of observation to be the sole witness to all these different individual's behaviour.

police also knocked at doors of the local residents, reportedly asking them whether they would be willing to make a noise complaint - presumably in an attempt to shore up their daft claims of anti-social behaviour. many refused, stating that they had enjoyed the spectacle and samba music - indeed, some had been bringing out cups of tea to some of the protestors.