Disappointingly throughout this afternoon the BBC has been reporting only 12,000 people on the London anti-war demo. However folks on the scene say the turn out is MUCH bigger than that, maybe reaching towards 100,000.
The march started to assemble at around midday outside parliament, which is probably where the bbc figure of 12,000 came from.

Later the numbers swelled to a much bigger size. Towards the end of the march there was also an anti-capitalist bloc complete with samba band. No trouble is reported and at 1600 Traf sq full of people with speeches due to go on for another hour or so.

Hundreds marched in Sydney, a few thousand in Japan, over a thousand in Stockholm, and over 5000 in Istanbul.

some pictures from demos 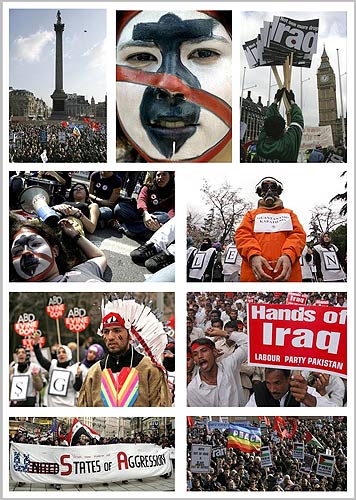 In Belgrade 100,000 people turn up at Milosevic's memorial, and thousands at his burial, lining the streets.
In London 12,000 campaigners protest Iraq, complete with their witty masks of Bush and Blair.
Look at the BBC reports. They play down the importance of the Belgrade numbers, continually insisting that most Serbs don't care about Milosevic or are against him, even though a pitiful 2,000 turned up at the counter-rally, despite the BBC and others continually mentioning it and text messages being sent around to get people to go there.
The BBC report on this demo on the other hand says something along the lines of "many Brits could be forgiven for staying in today with a nice warm cup of tea and the paper, but these ppl did not, but took to the streets", implying that most ppl just prefer the snugness and would otherwise have gone. It is a hell of a lot colder in Belgrade, but no-one mentioned that. And people didn't turn up on your pathetic rally because withdrawing troops makes no sense, given that most Iraqis want us there until their government can deal with the terrorists by itself.

Why dont you all go over to the Sudanese embassy and protest if you are so set against injustice ?

Wow! Bushes approval rating down to 34%!!

THE *MAJORITY* OF THE U.S. AND THE WORLD *OPPOSED* TO THE WAR!

WHAT A MOVEMENT WE HAVE!!

No More Imperialist Wars for the Rich!