This Week's SchNEWS - Gaul To Arms

“The widespread perception in French society is that the gulf separating those ‘inside’ society, even if they are badly paid, from those ‘outside’, in particular living in the suburbs, has become more accentuated over the past 20 years.” - Sociologist François Dubet. 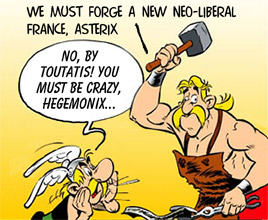 France is revolting, again. Last Saturday over a million took to the streets across the country, coming just two days after 300,000 had done the same nationally. Rioting broke out across the country and was at its fiercest at the Place de la Nation in Paris. This week 70 campuses across France have been partially or totally shut down and some 800 high schools are also striking. In some places the youth of the suburbs whose rioting spread across the country last October (see SchNEWS 520) have joined forces with students.

The match which lit this fire was the CPE - (first employment contract) a new employment law which attacks and casualises the status of workers under 26 (see box). French Prime Minister Dominique de Villepin unveiled this labour liberalisation package on the 16th of January saying that “urgent” action was needed to “bring the French labour market into the modern era” (and we all know what that means). In response, people quickly mobilised. The protests have gone into overdrive since March 7th, when half of France’s universities were occupied and up to a million students went on strike during a national day of protest. For the second time in six months France is in the grip of mass protests made up of movements of autonomous groups - not dominated by the manipulations and empty posturing of the organised left.

Demonstrations last Saturday included 300,000 in Paris which was followed by a six-hour street battle, with protesters fighting police on the Left Bank as they tried to retake the Sorbonne - which protesters had occupied from March 7th until they were evicted by the riot police on the 11th - a location steeped in memories of May ’68.

The day before the eviction police fired tear gas at the Sorbonne, claiming that the large police presence outside the university was under attack from… students throwing books! In Marseilles, where 100,000 took to the streets on Saturday, police also attacked with tear gas, arresting two in front of the Municipality where a large group of anarchists and others had gathered. Spirits were lifted when someone climbed on to the balcony and hoisted Alternative Libertaire’s red and black flag in place of the French tricolour.

Also on Saturday, a postal worker, Cyril Ferez, was severely beaten in Paris by the notorious specialist riot police, the CRS, and is now in a coma. He was left for 50 minutes motionless on the tarmac at Place de la Nation with police initially claiming he was drunk and attacked by other protesters (yes, really). Back in the real world, witnesses claim that five or six CRS laid into him with truncheons and it was protestors who eventually managed to get him medical help.

These protests against the CPE are just part of a broader movement against the US/UK-style liberalisation of the French economy, and follow other public rejections of these policies, including the referendum which gave a firm ‘non’ to the proposed European constitution and its raft of neo-liberalisations. Despite the mainstream media claiming that the French are being anything from anti-free enterprise to downright racist, a look at the real causes behind the revolt reveals the usual plan: corporate bosses are lining politicians’ pockets for a mutually beneficial carve up of the economy, and the dumping of any regulations – such as workers’ rights - which stand in the way of the fat-cat feeding frenzy.

While cynical pundits say that young people are de-politicised and assume that the French protests are the work of militant trade union activists, the fact is this is coming from autonomous groups in communities, workplaces and campuses, organising in a decentralised manner. Actually the unions - just as they were in May ’68 - are a force against militant resistance, and would rather people just marched and trundled off home at 5pm.

New employment laws are part of a programme, followed by successive governments, of introducing repressive laws – as well as dragging out old laws - to put down the civil unrest they have caused, and using all legal tools at their disposal to push through changes, while either ignoring protests or sending in battalions of riot cops. The protests this month follow on from the heavily repressed student protests last spring, and the riots late last year (see SchNEWS 520), which were a response in poorer suburban communities across France to harassment by racist police and high unemployment. Youth unemployment - at 23-50% in some Paris suburbs - is among the worst in Europe, and the state’s response to the ‘yoof of today’ has been repression rather than community building.

The changes in the French economy are part of a much wider transition from ‘Old’ to ‘New’ Europe, as more and more countries are dragged into the brave neo (liberal) world. In many ways the French are now fighting the battles we lost during the Thatcher years. The ‘new’, cheaper, eastern European countries are pushing jobs eastward, and on top of that, with the rise of China and India as enormous cheap workforces, more jobs are disappearing from Europe. Meanwhile in France, the gap between the ‘haves’ and ‘have nots’ widens towards UK levels.

Momentum is still building up across France with more waves of strikes, demonstrations and occupations of schools, campuses, workplaces, railway stations and town centres this week. Tuesday saw a day of action with 800 schools involved in strikes, while yesterday (Thursday) saw 450,000 demonstrators across France. The large mass demo in Paris ended with 100 arrested after violent clashes and tear gas attacks by police around les Invalides. Also yesterday 2 - 3,000 blockaded the railway line at Angers, and were later cleared with tear gas. In Lannion, 500 high school kids blocked entrances to a shopping centre, and it kicked off in several other centres including Rennes and Marseilles. Next Tuesday a general strike is planned.

The CPE could bring down De Villepin’s government, or they could dump it or make a compromise with big unions. Either way conditions won’t really improve for those at the lower end of the job market. The problems highlighted by last year’s riots – racism, unemployment and poverty - are all still there. SchNEWS wonders how long it will take for Britain’s underclass to realise what two decades of neo-liberal reform have done for them and import some French tactics from over the channel together with their cheap beer’n’fags.

For updates see: www.libcom.org/blog or Indymedia:

The new employment contract (CPE – meaning ‘first employment contract’) which comes into effect in April, would allow bosses to sack workers aged 15-25 years without reason or compensation during the first two years of employment – creating a generation of disposable workers without job security. This follows the CNE, a similar law passed last year which applies to small businesses with less than twenty on the payroll, and other recent laws which are all about putting profit ahead of workers’ rights, safety and wages. It’s the usual neo-liberal squeeze giving corpoartions a boost by making it easier and cheaper to hire and fire workers.

* Next Tuesday (28th) in France there will be a general strike with civil disobedience across the country bringing workers, students and the unemployed together.
* 1.5 million public sector worker in Britain will also be on strike that day (28th) fighting attacks on pension schemes, and plans to increase the retirement, There well be demos across the country.

To find out more see

For the rest of this week's issue go to: