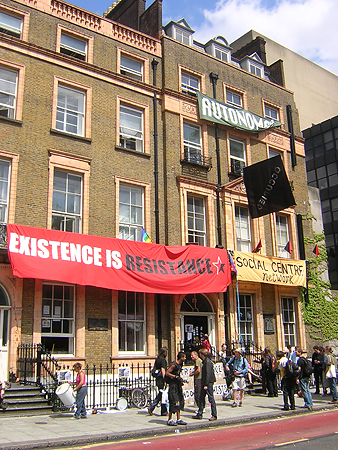 One last burst of light and heat

The Square Occupied Social Centre was formally dissolved in the aftermath of a 4-hour garden barbecue. About thirty people, including most of those who had had a sustained relationship with the space, had come together to decide the term of the resistance that had begun on the Friday. Sadly - or perhaps it was for the best - it very quickly became clear that there simply wasn't the energy to go on.

People's reasons differed. The most significant and widespread was exhaustion - physical, emotional and political. People were just tired, and wanted a summer in the sun, not barricaded into a building. Others felt the social centre had drawn to its natural conclusion given the limits that had been placed upon it, and wanted summer for reflection and reformulation of the project. Still others were concerned that the symbolic weekend of resistance, which burnt so brightly, would be diluted by days and weeks of events for events' sake. What everyone with a long-term engagement agreed upon was that this game was up.

The space has now been passed on to a handful of residents who wished to remain and a few people who wanted to continue to run the place as a political and cultural venue. But the Square, which was the network of friends and comrades that ran and maintained that building for 5 months, has now ceased to be. The people involved will be meeting at 3pm on Sunday the 9th of July at The Swan, Cosmo Place, off Southampton Row to consider the Square's history and its legacy - and specifically to begin a reassessment of the social centre project at this stage and to consider our future role as a collective within that project.

To that end, all those who have been involved are invited to write critical texts on the Square, exploring the extent of and reasons for its failures and successes, with an explicit focus on helping all of us learn the lessons of the five months of activity we have just shared, and perhaps share those lessons further afield, too.

In conclusion, it should be emphasised what a glorious explosion the weekend of the resistance was. Quite apart from the official events - the well-attended resistance in the morning of the Friday and the remarkable 8 hour gig on Saturday, attended by hundreds of kids - what was most remarkable was our emotional fragility as we all began to sense that we were approaching a profound ending. This building has been sustenance for us, a place to socialise with like-minded people, a place in which to play, to party and conspire. That it was ending - for all of its flaws and tensions - made a lot of us take stock of what was being lost: and it was more than we had thought.

Something has passed from central London into our hearts. The red and black will not fly over Russell Square much longer but we carry them in exile, and we will have another building in due course.

Just another minor ending,
The Ex-Occupation Committee of The Square.

The Ex-Occupation Committee of the Square

What did you do in less than 6 months to become so exhausted, politically etc., if you don't mind me asking? I really don't see the reason to abondon such a beautiful building until we are forced to, and I see potential to do more stuff in it - which incidentally is happening, the place is still working as a social centre despite the Square collective dissolving itself. From there maybe we can perfection our experince and move to the next social centre without interruptions / summer holidays? What do people think? Please feel free to pop round the social centre any time, until it lasts.