Is 2006 the year of peak oil? The latest figures are suggesting it could be...

World production of oil has peaked according to Dr Ali Samsam Bakhtiari, a former executive of the National Iranian Oil Company. He predicts a fall of 32% by 2020 as wells dry up and new discoveries become rarer, smaller and harder to extract...

(c) 2006, Leamy
Speaking at lecture in Sydney, hosted by the Financial Services Institute of Australasia, Dr Bakhtiari told those gathered that global oil production has reached it's peak. The latest figures put the level of global production at about 81 million barrels per day which is almost 4 million barrels lower than the International Energy Agency’s predictions.

He reported that OPEC is already producing as much as it can (31 million barrels per day) with major suppliers like Saudi Arabia and Kuwait finding it increasingly difficult to meet their extraction targets.

While Bakhairi is adament that global production has peaked, the publically expressed opinion from oil companies differes widely. Last month, Mark Finley, head of energy analysis for BPsaid there was no shortage of oil resources, a claim that doesn't tally with the 2.5% fall in the companys global production reported last week.

ExxonMobil are also in public denial. They recently published adverts in Australian newspapers dismissing the idea that peak oil is coming soon. “Oil is a finite resource, but because it is so incredibly large, a peak will not occur this year, next year or for decades to come", they said. The chief executive officer for Total, Thierry Desmarest, is only slightly less optimistic. He said in June that they weren't expecting global oil production to peak until 2020.

However, Dr Bakhiari claims that many oil producers have been providing inflated estimates of their reserves and output capacity which makes estimating remaining reserves very difficult. Looking at actual production figures, rather than claimed reserves, paints a less rosy picture. Some of the worlds biggest fields, the Burgan field in Kuwait, Cantarell in Mexico and Britian's and Norway's North Sea fields, are already in decline and Bakhiari believes that Russian oil production peaked in 2004.

Dr Bakhtiari also reported that new oil discoveries were small and no longer able to replace lost production. He predicted that we will soon experience a major economic impact to the massive fall off in output from the North Sea and Mexican oil fields.

"Crude oil is the master domino, when you tumble crude oil, all the other dominos tumble.", he said referring to the devisating consequences likely to be experienced by the world's economy as the post peak shortages and inflated prices set in.

Dr Bakhtiari said he could not predict how high the price of crude oil would have to go in order for demand to fall. However, reaching a high of $75.78 a barrel in New York on July 7, the threefold increase in crude prices within the last four years has apparently done little to effect the worlds thirst for oil. Global demand has been rising at around 2% per year.

There are just five years left to try to plan priorities for the use of crude oil according to Bakhiari, "The problem will become the day that you cannot optimise by price, you will have to optimise by availability, so there won't be oil for everyone.", he said

He is also predicting that the world’s natural gas production will probably peak around 2008 or 2009 and claims that the price may increase 800% compared to todays gas prices.

Dr Bakhiari is on a visit to Australia organised by the Association for the Study of Peak Oil (ASPO). During his visit he will give evidence to an Australian Senate inquiry into the future of the countries oil supplies.

Note. There is a free conference on Peak Oil taking place in London on Sat 15th July (see

http://www.powerswitch.org.uk/). You will also be able to find discussions and workshops on the issue at both the EarthFirst! Summer Gathering and the Climate Camp taking place in August.

The U.S. consumes about 20 million barrels of oil every day. That amounts to 25% of the entire worlds oil production. Since the peak of it's own oil production in the earlier seventies, the U.S. has been increasingly reliant on imports. The second largest supplier of oil to the U.S. after Canada is Mexico, but at current extraction rates Mexico has only 10 years of proven oil reserves remaining. Obviously they can't maintain such extraction rates forever and it appears that they may well have reached peak. The massive Bellota oil field, is now in decline and threatening the industry that forms the backbone of the national economy.

Mexicos largest oil field, Cantarell in the Gulf of Mexico (the second-largest single oil field in the world after Ghawar in Saudi Arabia ) is also predicted to decline during the next few year. It currently produces 2.1 million barrels per day (10% of U.S. daily consumption) but is expected to drop by between 520,000 to 1.4 million barrels per day by 2008, according to recent analysis from the Mexican government.

Obviously, as the second-largest source of U.S. oil imports, the outcome of the recent controversial presidential elections in Mexico was of major interest to the U.S. The left-of-center candidate Andres Lopez Obrador wanted to restructure the Mexican oil industry around valued added refined products such as gasoline and plastics. He pledged to build three gasoline refineries and boost petrochemical production, noting that Mexico spends $4.5 billion in gasoline imports and nearly $10 billion in petrochemical imports every year, mostly from the U.S. However, the U.S backed victor, conservative Felipe Calderon, has instead promised to open up the industry to foreign oil corporations to help increase crude exports to the U.S.

Candian oil sands have been touted by many as the only viable solution to the threat of dwindling crude oil supplies. Oil companies have been hoping to plug the post-peak gap and continue to supply the U.S. with oil by using an extremely energy ineffcient coal-to-oil conversion.

Canada is the largest supplier of crude oil to the U.S. but as their conventional oil fields have been declining, eyes have turned to the huge but difficult to extract reserves in Alberta to keep up the flow of oil. It was hoped that they could reach production levels of two million barrels daily by 2010 but this currently seems unlikely. The oil sands projects are experiencing severe infrastructure problems and runaway costs. Even with oil hitting the $75 a barrel mark, the economics of oil sand extract don't currently seem to hopeful.

While oil companies go all out to secure their share of the worlds remaining oil reserves and spend vast sums from their record profits to seek new ways to tap those hard to reach reserves, those people who care about the planet should be hoping that they fail. The idea of using energy derived from coal to extract oil from tar sands is obviously an environmental nightmare that would release massive amounts of carbon dioxide into the atmosphere and speed global warming. Let's hope Canada can't live up to it's promise.

The End Of Suburbia 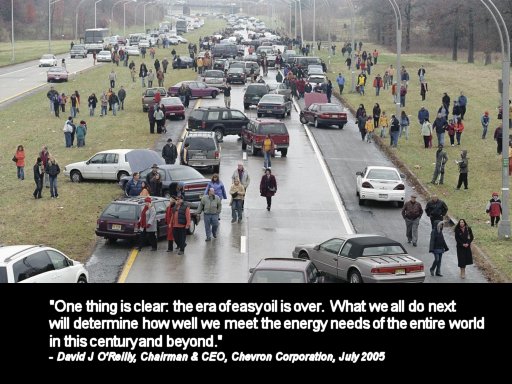 talking about the dwindling supply of cheap energy and its effect...

this Friday 14th July as part of the Indymedia '8 Days Against The G8' film festival at Ramparts Creative center,


The End Of Suburbia:Oil Depletion and the Collapse of The American Dream

'Since World War II North Americans have invested much of their newfound wealth in suburbia. It has promised a sense of space, affordability, family life and upward mobility. As the population of suburban sprawl has exploded in the past 50 years, so too has the suburban way of life become embedded in the American consciousness.
Suburbia, and all it promises, has become the American Dream.
But as we enter the 21st century, serious questions are beginning to emerge about the sustainability of this way of life. With brutal honesty and a touch of irony, this film explores the American Way of Life and its prospects as the planet approaches a critical era, as global demand for fossil fuels begins to outstrip supply. World Oil Peak and the inevitable decline of fossil fuels are upon us now, some scientists and policy makers suggest.'