Transport from Swindon to Lebanon demo, London, this Saturday

As the slaughter in Lebanon continues, with tacit support from Tony Blair, and munitions flown in via UK airports and air bases, peace campaigners from Swindon will be joining the protest in London this Saturday to demand an immediate cease fire. Meet at 9:30am outside Regents Circus college. Four photos from last Sunday’s demonstration in Trafalgar Square are attached, along with a press release from Swindon Stop the War Coalition, and the latest newsletter from stopwar.org.uk 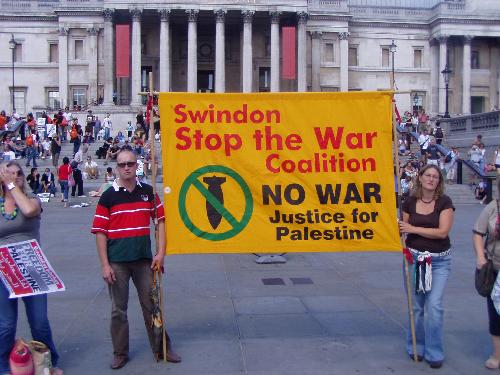 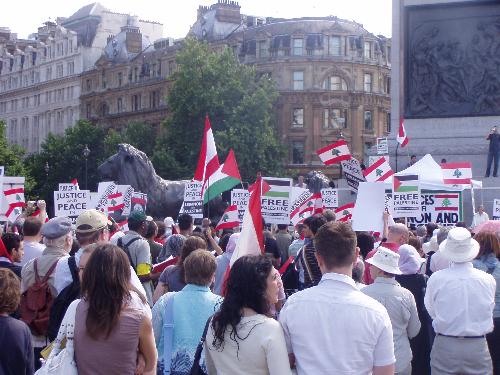 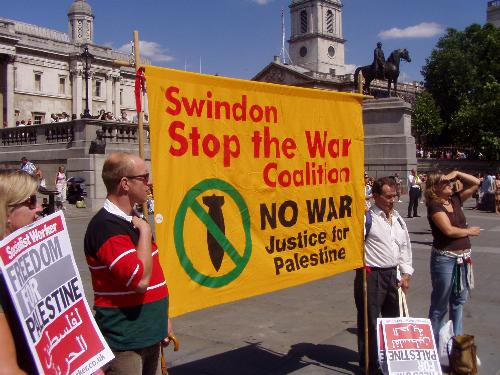 Fredom and justice for Palestine 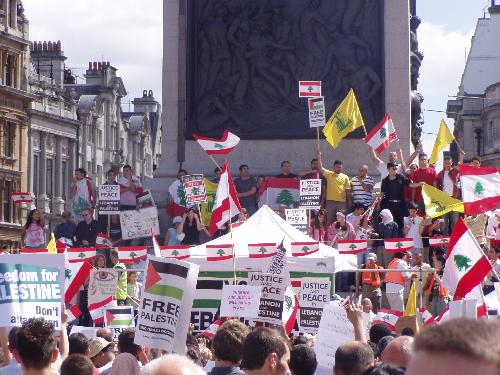 Supporters of Swindon Stop the war Coalition will be travelling to London this Saturday for an emergency demonstration calling for an immediate ceasefire in Lebanon. Spokesman for the Swindon group Andy Newman explains: “We are seeing slaughter of civilians on our TV screens, and mass destruction of Lebanese towns, yet the British government is not only failing to press for an immediate ceasefire, but allowing British military air bases to be used to send more missiles to Israel. There is very strong feeling about this, and we want the government to change its mind.”

RAF Brize Norton, just half an hours drive from Swindon was used on Monday night for American flights carrying munitions to Israel. An Atlas Cargo Flight arrived at 9.10pm from Kelly Airforce base at San Antonio and left at Brize Norton at 00.16am on Tuesday on route to Tel Aviv. An Israeli cargo 747 was also at Brize Norton at the same time[1]. Andy Newman said: “By allowing British military bases to be used directly to support the Israeli military Tony Blair has stepped out of the role of honest broker, and is making us an actual military ally of Israel – this must stop.”

Swindon South MP, Anne Snelgrove has also signed a letter along with 59 other MPs calling for a ceasefire, saying: “we condemn both the Hizbollah rocket attacks which had killed 17 civilians in Israel by 25 July, and the disproportionate Israeli military strikes which in the last few weeks have killed over 370 civilians and displaced over 500,000 in Lebanon, and killed over 100 in Gaza. Rocket attacks by militias on Israeli towns do not protect the people of Palestine or Lebanon. Likewise the people of Israel are not protected by military might which targets homes, bridges and roads in Lebanon, cuts electricity and water supplies to the majority of homes in Gaza, including refugee camps, and which has done far more damage to Lebanon’s democratically elected government than it has to Hizbollah. Such actions are unacceptable, immoral and illegal” [2]

The coach for the London demonstration leaves at 9:30 am from regent Circus outside Swindon College. Ring 01795 520903 to book places.

Bring children's shoes to the national demonstration on Saturday 5 August. We will leave them at 10 Downing Street. We want a mountain of children's shoes outside Tony Blair's home to symbolise the horror at his complicity in war crimes.

And where will Tony Blair be on Saturday, when tens of thousands will march past his home calling for an immediate ceasefire, when the majority of people in Britain support that call, when many in Blair's party are calling for a recall of Parliament, when almost all of his ministers say Israel's onslaught must stop now? He'll be sunning himself on holiday in Barbados.

But bring them most of all in the knowledge that if we raise our voices loud enough and if we mobilise overwhelming support for the cause of peace, we can stop Tony Blair's serial warmongering and help prevent any more deaths of children caused by his slavish support for George Bush.

http://tinyurl.com/fzq2g ). People in towns throughout the land have arranged to meet in groups to come by train to London.

This nationwide mobilisation is unprecendented for an emergency demonstration called at such short notice. In London itself, hundreds of volunteers have been leafletting tube stations, shopping centres, mosques, churches etc (we still need more help: Call 020 7278 6694).

The nationwide outrage at the carnage in Lebanon and Gaza will be expressed by many tens of thousands in London on Saturday. Stop the War has not experienced the level of response it is getting since February 2003, before the outbreak of the Iraq war. Over 1000 people every day are asking to be put on our mailing list to be kept informed of our activities.

http://tinyurl.com/psdzp ) and visit the mosque to encourage its members to join Saturday's demonstration, which will unite Muslims with non-Muslims in our common cause of demanding an immediate and unconditional ceasefire in Lebanon and Gaza.

http://tinyurl.com/r72kl ), which reinforces our call for everyone to bring children's shoes to Saturday's demonstration to leave on Tony Blair's doorstep.

***********************************
5) MORE STEWARDS URGENTLY NEEDED
All the signs are that our CEASEFIRE NOW demonstration will be much bigger than would usually be expected for a demonstration called in the August holiday period and with barely a week's notice to build it. We need more stewards to help organise on the day of the demonstration. If you can help, please telephone the national Stop the War office on 020 7278 6694 or email your contact details to

***********************************
6) MANY THANKS FOR YOUR DONATIONS
We have had the most wonderful response to our emergency appeal to fund Saturday's demonstration and to continue the campaign against the Bush/Blair wars, which they are now threatening ever more loudly to extend to Syria and Iran. Stop the War Coalition would like to thank everyone who contributed and encourage anyone who hasn't to send a donation now.

We need to continue raising the level of our opposition to the Bush/Blair wars, if we are to ensure that they do not cause ever escalating slaughter of innocent civilians and the destruction of whole countries. It is the inspiring generosity of our supporters which has helped Stop the War build the biggest anti-war campaign in British history. We still have much work to do. Please donate.
TO DONATE, GO TO: