London: Tens of thousands protest against slaughter in Lebanon

On Saturday, tens of thousands gathered in London to demand an end to the Israeli bombardment of Lebanon. The protest was called by the Stop the War Coalition (STWC) with just one week’s notice.

The organisers estimate that 100,000 people marched from Hyde Park to Parliament Square via the US Embassy in Grosvenor Square. The demonstration was also supported by the British Muslim Initiative, the Campaign for Nuclear Disarmament, the Palestine Solidarity Campaign and Lebanese community associations.
Most notable was the strong presence of young people and whole families of Middle Eastern origin. The World Socialist Web Site spoke to a number of Palestinian people who had previously lived in Beirut and were driven out in 1982 following the attacks of Israel and the Phalangists.

Banners and slogans called for an immediate ceasefire and “Hands off Lebanon—Don’t attack Syria.” A number of demonstrators also carried placards in the colours of the Lebanese flag.

A large police presence was openly antagonistic to the protesters, using heavy-handed tactics to keep people on the road. Later as protesters demonstrated outside the United States Embassy, riot police were mobilised and manhandled a number of those outside the building.

The march also passed Downing Street, the home of Prime Minister Tony Blair, where a letter was handed in signed by 40,000 people calling on him to help end “bloodshed and destruction unfolding daily.” The protesters also left children’s shoes to symbolise the ever growing number of children killed in the Israeli bombardment of Lebanese towns and villages. More than 100 demonstrators sat down outside Downing Street in protest and a number were arrested.

The march had been called under the slogans of “Unconditional ceasefire now, Stop Israel’s attacks on Lebanon and Gaza, End Tony Blair’s support for Bush’s wars.” It was officially endorsed by the Independent newspaper and fashion designer Katherine Hamnett was commissioned to design a “limited edition” T-shirt for the demonstration emblazoned with the words, “Unconditional Ceasefire Now.”

Lindsey German of the Socialist Workers Party, the STWC national convenor and a leading member of George Galloway’s Respect-Unity coalition, set the tone for the demonstration, calling on Blair to change his attitude to the war. The prime minister should be working for an immediate ceasefire, she said.

Such calls obscure the fact that the very people being asked to end the war are those that have supported, encouraged and armed it.

Rose Gentle spoke on behalf of the Military Families Against War. Her 19-year-old son was killed in the war in Iraq in 2004. The tone of her speech was markedly different.

She called on Blair to be indicted for war crimes and said, “He is responsible for killing thousands and thousands of people, including my son. And I promised my son that I’d fight for him. People say to me, do you not blame the Iraqi person who put the bomb there that killed your son? But the way I look at it, what would we do if people came in and started taking bits out of our country?”

The World Socialist Web Site interviewed some of the participants.

Chris from London lived in Beirut as a child. “I think we need as many people as possible to come here today,” he said. “I don’t agree with either Hezbollah or the Israelis but I just want the war to stop. The real axis of evil is the US, Israel and Britain...

“I don’t think there is going to be a ceasefire. The war will go on in some form for years. I think the real war is between America and China over resources. If you look in Africa, China has new markets there and is winning all over the place. And the reason Britain and America went into Iraq was to control the oil resources before the Chinese did.”

“It is a crime against Lebanon and Palestine. The two soldiers abducted by Hezbollah were just used as a pretext. They [the Israeli government] have abducted thousands of Palestinians over the years.

“Look at the weapons that the US has sent to Israel, bunker-buster bombs in planeloads, as if Israel didn’t have enough weapons already. Then they complain about the Mickey-Mouse bomblets and crude weapons being supplied by Iran to Hezbollah.

“They have taken Afghanistan and Iraq, now they are taking Lebanon; next it will be Iran. With Afghanistan, they did it on the pretext of 9/11. With Iraq, they said they were freeing the Iraqis from the rule of Saddam, but now they are splitting the country into three or four parts.

“I would rather have had Saddam than this, and I am no lover of Saddam—I hate the bastard.

“The countries like Iran and the others had better get together, or else they are going to get wiped off the map.

“All people here can do at present is take part in demonstrations. But Blair will not take any notice—he is just an arse-licker for Bush. The government here are completely disconnected from the people of this country. Look at them now—100 percent behind what Israel is doing.

“Blair has not expressed a single independent thought in the last six or seven years. He only says what the US wants him to say. The sooner that guy goes the better.”

Elizabeth, a student from Leamington Spa, said, “We want an immediate ceasefire and an end to the war. I have noticed that there is some anti-Semitism on the demonstration and I would like to disassociate myself from that. There is a danger of simplifying the message. It is not just about Israel.

“The media in Western Europe have been really one-sided. There is no real explanation of why this is taking place. I am scared of an attack on Syria and Iran.”

Punam, another student, said, “We are here to protest what is going on in Lebanon. I don’t know what the solution is, but we do need a ceasefire in order to have peace. I also agree that we must be careful not to be associated with any anti-Semitism.”

Menina from London said, “I think this war is awful and there should be an immediate ceasefire. It is encouraging that people are prepared to come out and demonstrate.”

Ruth said, “I am one of the British Jews who want to speak out against this war. All my family have come here to demonstrate as well. We are ashamed of Blair and he does not speak for the people of Britain.” 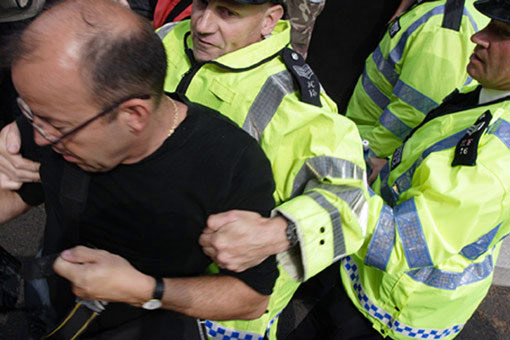 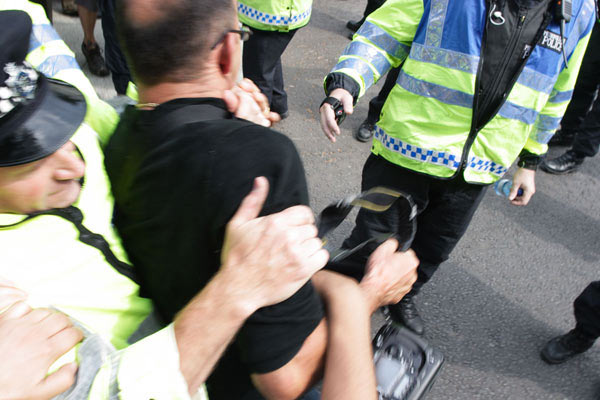 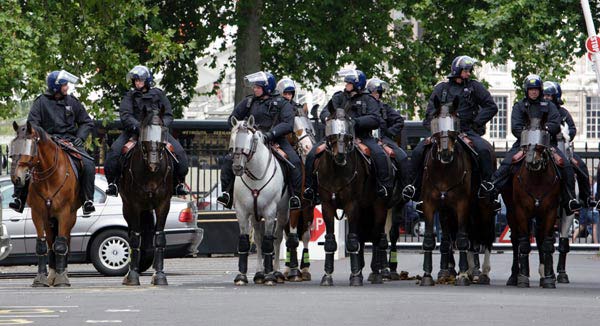 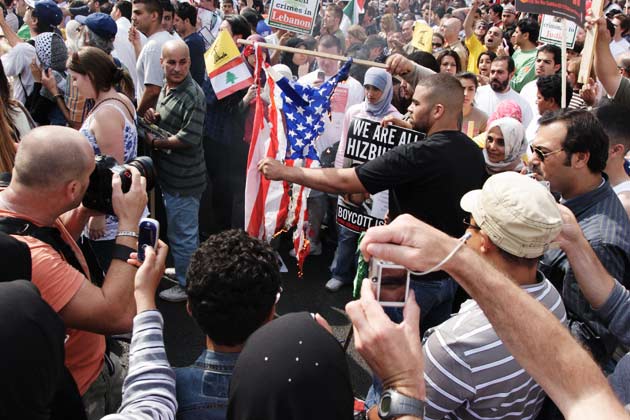 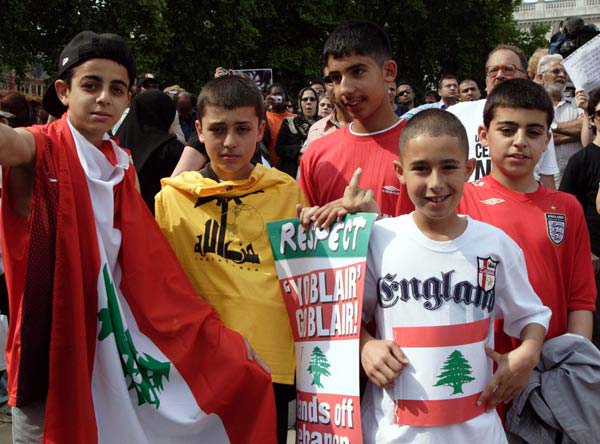 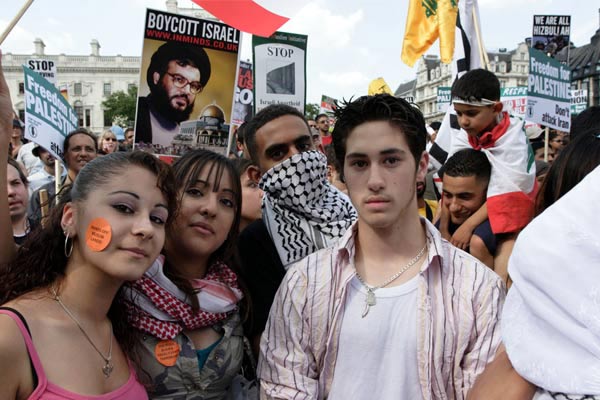 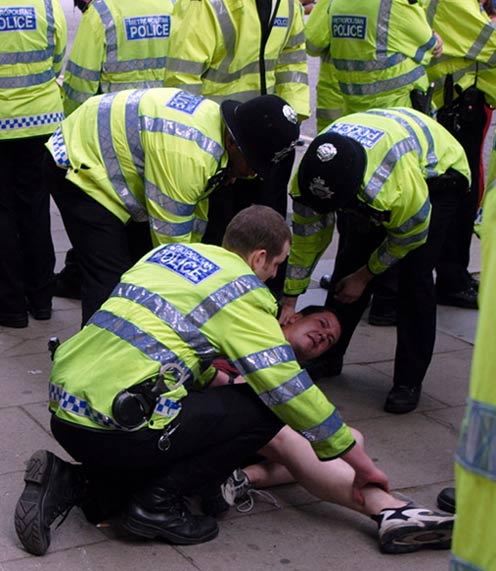 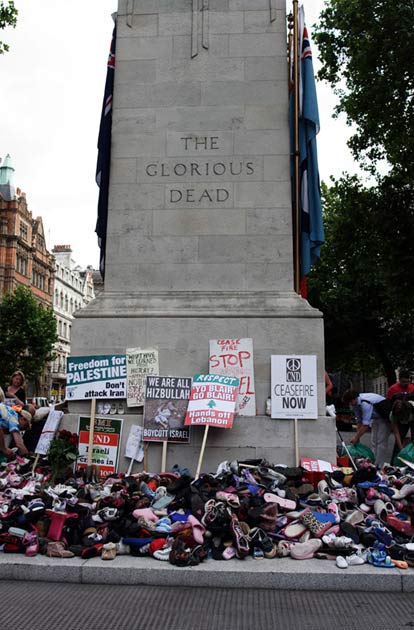 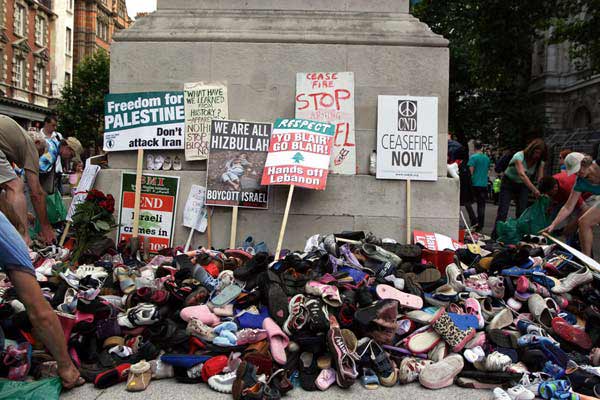 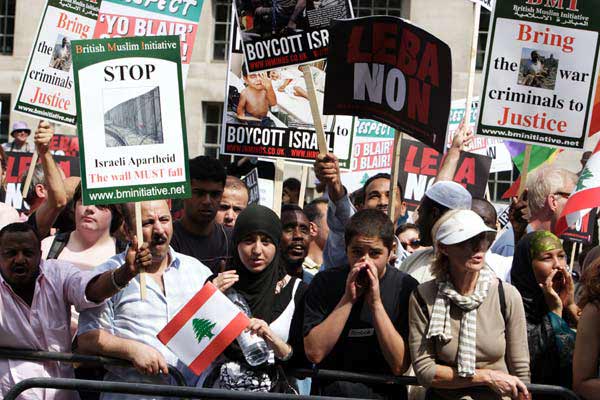 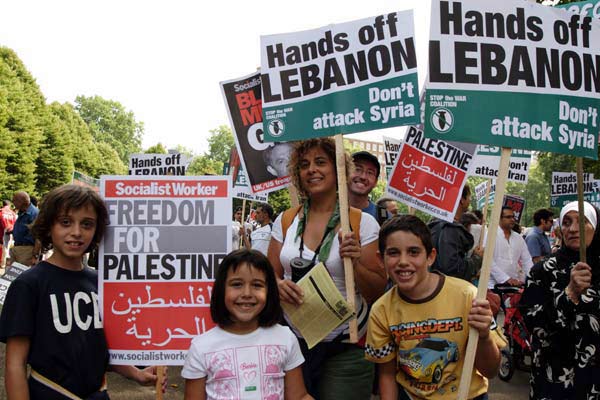 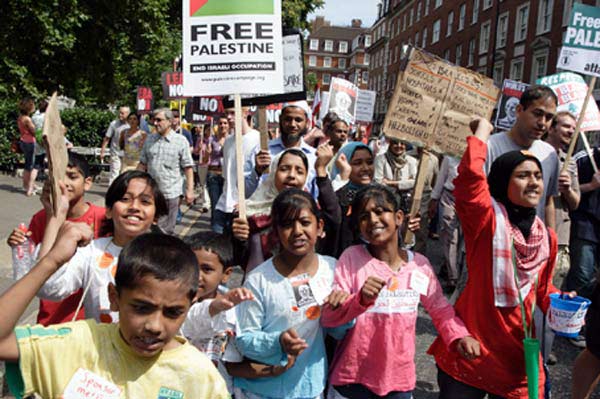 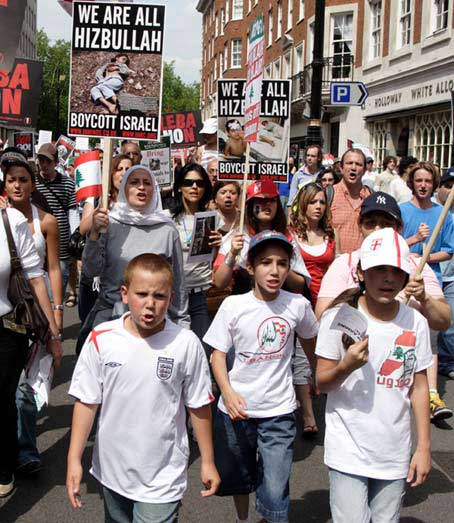 Thousands of people marched in London today (5th Aug) in protest of war in Lebanon and against Blair’s failure to denounce the Israeli bombardments.
Estimates were over100,000 marched today in London Many were families with their children carrying placards in support of peace and questioning Blair as to why he continued to support Bush’s wars.
Mounted Police and those carrying guns were kept out of sight to the main march but were in evidence in Rich Terrace Between MOD & Dept of Health buildings (other side of Whitehall facing Downing St )
The protest was organized by anti war organizations and started from Hyde Park, passed along the US embassy and Whitehall ending in a rally in Parliament Sq People slung children’s shoes at the gates of Downing St as they passed
Demonstrators also placed hundreds of kids shoes on the Cenotaph
Two arrests were made, one being a photographer
The demo and ended with a rally in Parliament Sq. there was a further arrest in Whitehall as marchers made there way home

Other press frames of photographer's arrest and seizure of camera