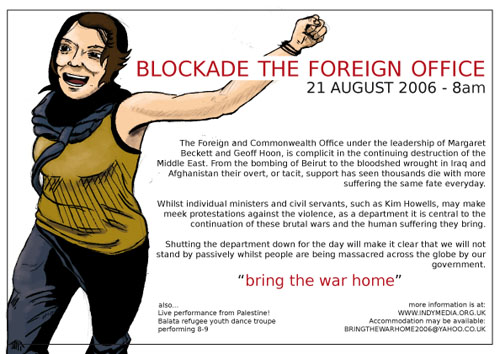 The Foreign and Commonwealth Office under the leadership of Margaret Beckett and Geoff Hoon, is complicit in the continuing destruction of the Middle East. From the bombing of Beirut to the bloodshed wrought in Iraq and Afghanistan their overt, or tacit, support has seen thousands die with more suffering the same fate everyday.

Whilst individual ministers and civil servants, such as Kim Howells, may make meek protestations against the violence, as a department it is central to the continuation of these brutal wars and the human suffering they bring.

Shutting the department down for the day will make it clear that we will not stand by passively whilst people are being massacred across the globe by our government.

Map to get there:

Also see a report in the Guardian about the event:

Accommodation may be available: