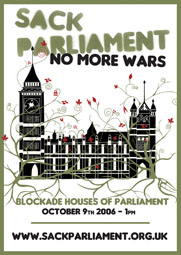 Over the past few years the UK parliament and government have led this country into war upon war, torn up age-old rights and made the division between rich and poor to grow ever wider. Despite only 22% of the electorate voting for them the Labour party has suppressed any opposition to its legislation, whilst opposition parties have continued to offer them a veil of legitimacy by engaging in weak debate rather than denouncing this one-party state.

Despite repeated mass protests parliament has ignored those it is supposed to represent and consistently sided with continuing wars and further authoritarian legislation.

We have only one option left: Sack parliament
We must sack parliament because:
* It has been complicit in the war of terror and the continued destruction of Iraq and Afghanistan
* It has failed to condemn and challenge acts of state terror and collective punishment from Lebanon and Palestine to all those illegally interned in Guantanamo Bay and Belmarsh
* It has helped erode our civil rights: the right to free movement, free assembly and free speech have been undermined with curfews, ‘no protest’ zones, ASBOs and increased police power

MPs and Lords return from their summer recess on October 9th. We need to ensure they can’t get back inside Parliament to stop them spreading their culture of fear.

http://www.sackparliament.org.uk - for updates, and details of past actions.

This action came out of the emergency assembly called to discuss a direct action response to the Lebanon/ Israel war, Iraq, Afghanistan and the continuing insecurity around the globe. In the past three weeks the assembly has facilitated six actions, including the blockade of Brize Norton and the Foreign and Commonwealth Office

We meet every Tuesday at 7pm at LARC -