Shell is the third largest oil company in the world. It is also the new sponsor of the Natural History Museum’s Wildlife Photographer of the Year Award. 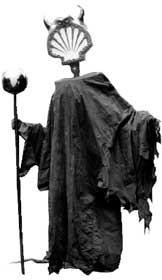 It’s our view that oil is a curse that fuels wars for resources like that now being waged at such a high cost in Iraq. It is also the greatest cause of climate change, which is a worldwide emergency and could result in the death of 400 million people, mostly in the poorest countries of the world (according to the government’s Chief Scientist). This emergency is certain to result in the extinction of millions of plant and animal species. Oil spills are also major
causes of death and destruction for many varieties of marine life, including some that are already endangered.

Shell’s core - and growing - business is rooted in oil and gas production. It seems to have decided that pumping a tiny percentage of its profits into sponsoring places like the Natural History Museum (NHM) will divert your attention from this globally suicidal fact…

…which is hopefully where we come in, pointing a spotlight at the growing gulf between what they say (a language known as ‘greenwash’) and what they do. We run a campaign/exhibition called ‘Art Not Oil’. As part of it, we are working with Friends of the Earth to persuade the NHM and its visitors that Shell is an inappropriate partner for the Wildlife Photography Award. The campaign will include our own travelling photography exhibition in October 2006 and beyond, accompanied by speakers from Shell-affected communities. We will keep at it until Shell is no longer welcome in the NHM.

Things you can do:
* help get the word out, either with more copies of our postcard, or by contacting people – particularly photographers – who might be up for helping out or contributing images. That work could be images of wildlife affected by oil or threatened by climate change, or it could be of communities directly affected by Big Oil.
* Tell NHM boss Michael Dixon what you think of Shell (not to mention BP, which is a Museum ‘partner’):

We believe there can be a greener and fairer future for the planet and its people, a future that will require in part the consigning of the oil industry to the history books. Our campaign hopes to be one small step in that direction.

Thanks for reading, and for anything you’re able to do.

SHELL’S WILD LIE: THE TRUTH WILL OUT...