Worldwide Children's Revolution To Try to Save the Human Race From Extinction?

“A worldwide Children's Revolution to try to save the human race from extinction caused by global warming and climate change could start in London, England, on 4 November 2006.”
This is the introduction to a short news item posted by the Earth Aid Environmental Campaign with the Washington, DC Independent Media Center, 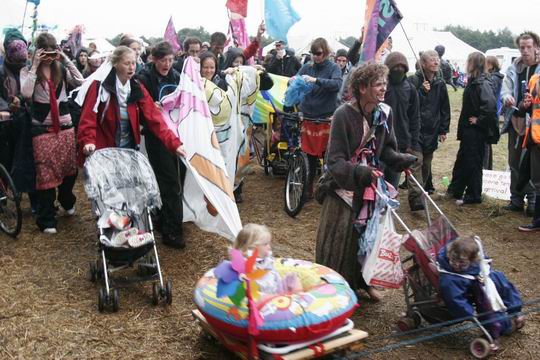 The Children's Revolution Kids' Bloc at the Camp for Climate Action

The story suggests the possibility of the beginning of a new youth movement led by the children of the eco warriors, and proposes that all the Marches for Global Climate Justice around the world on 4 November should be led by children.

Because of the difficulty in contacting most of the parents and the rest of the key people involved with helping the Children's Revolution kids' bloc try to shut down the Gleneagles summit in 2005 and march on the Drax power station, we have asked Rising Tide UK to pass on the following message to all their members:
“A proposal for the Children's Revolution kids' bloc to lead the March for Global Climate Justice from the American embassy in Grosvenor Square to Trafalgar Square on 4 November has been posted on Indymedia UK (headline: 'Children's Revolution Kids' Bloc May Lead the March for Global Climate Justice').
“The speeches will start at 12 noon and the march will begin at 1 pm.

“The logical order of the procession would be the kids' bloc at the very front of the march with their banner 'The Kids Are Revolting!' and Rinky Dink and the Rhythms of Resistance samba band alongside them.
“School Students Against War and the People and Planet university students' Carnival should follow immediately behind the kids' bloc, with the Clandestine Insurgent Rebel Clown Army in free range mode making it clear that the kids are indeed leading the Revolution to try to save the human race from extinction.

“It is not being suggested that the clowns should cause any trouble as such, but they might like to do a bit of clowning about as it were...
“None of this has been cleared with the 'organisers' or the rich important people making the speeches or the police, but what the hell, it's a free country and they're our streets so we can do what we like, can't we?
“Other banners that have been suggested are 'The Children Are the Future,' 'We Are Heading For Extinction,' 'Can You Save the Human Race?' and 'When Money Talks Truth is Silent'.

“I have been unable to contact Raga the Quaker peace activist who helps to paint the banners with the kids, or Stonehenge Brian who was one of the legal observers who videoed the first kids' revolt at Stirling, or the Reverend Martin Healer, or Angel, or any of the rest of the mums and dads, because we have just got evicted again and everything's in a muddle as usual.

“Hopefully you will be able to reach them all with this message and we can once again generate some real interest in the fight for the survival of future generations.
“Thank you and good luck,
“Nick, The EARTH AID Environmental Campaign.
email:

“PS. Obviously the final decision about whether to go ahead with this must be made by the kids themselves, but what they said at Stirling was that they wanted to keep doing it at every possible opportunity, and they would welcome the same help we all gave them the first time.”

The story posted with Indymedia in Washington, DC is headlined “Worldwide Children's Revolution to Save the Human Race From Extinction?” and it goes like this:
“A worldwide Children's Revolution to try to save the human race from extinction caused by global warming and climate change could start in London, England, on 4 November 2006.
“Plans for the March for Global Climate Justice to be led by the kids' bloc that attempted to shut down the G8 summit meeting at Gleneagles in Scotland in 2005 are being considered by environmental activists in Britain.

“The children of the eco warriors who organised the road protests against the British government in the 1990s held a picnic in front of the Scottish riot police to try to stop the delegates from reaching the meeting which was attended by George Bush and Tony Blair.
“The kids also paraded around in front of the cops holding a banner reading 'The Kids Are Revolting!' while more than 1000 activists followed them singing 'When the Kids Are United They Will Never Be Defeated.'

“The Children's Revolution kids' bloc also led the march at the Drax power station protest in Yorkshire organised by the Camp for Climate Action in August, 2006.
“They carried the same 'Kids Are Revolting!' banner and the police blocked their way and tried to stop the women and children from reaching the power plant.

“On 4 November in London more than 20,000 people are expected to march from the American embassy in Grosvenor Square to Trafalgar Square to demand global climate justice at the United Nations climate talks starting on 6 November in Nairobi.
“The kids' bloc are considering leading the march with the Rhythms of Resistance samba band and the Clandestine Insurgent Rebel Clown Army marching alongside them in support of the Children's Revolution to save the human race from extinction.

“There are expected to be similar Marches for Global Climate Justice in a number of different countries simultaneously on 4 November.
“Some British activists are hoping that all the marches around the world will be led by children to emphasise the fact that the very existence of future generations will depend on urgent worldwide action to tackle global warming and climate change.

“A number of international scientists are claiming that humanity faces extinction this century as a result of the effects of global warming.
“Our lawyers are working on court cases on behalf of the people of the world against the British and the American governments and the oil companies and the transnational corporations and the banks, to attempt to hold them all responsible and accountable for causing global warming.
“The full report 'Can You Save the Human Race?' will be available soon.”

We would like to suggest that maybe the only way to save the human race from extinction will be to support the Children's Revolution in a peaceful attempt to fight global warming and climate change and ensure the survival of future generations for all time.
Whatever we do should be fully in accordance with the principles of the Rio Earth Summit Agenda 21 and the United Nations Convention on the Rights of the Child.
Hopefully everyone who can pass this along to all the mums and dads involved will do so for us.
Thank you.