London Mexican Embassy protest - bad leg: what is there to learn

After finally getting my laptop back from the unfortunate coffee spill episode, I've downloaded the photos of my right leg from Monday evening outside the Mexican Embassy in London. 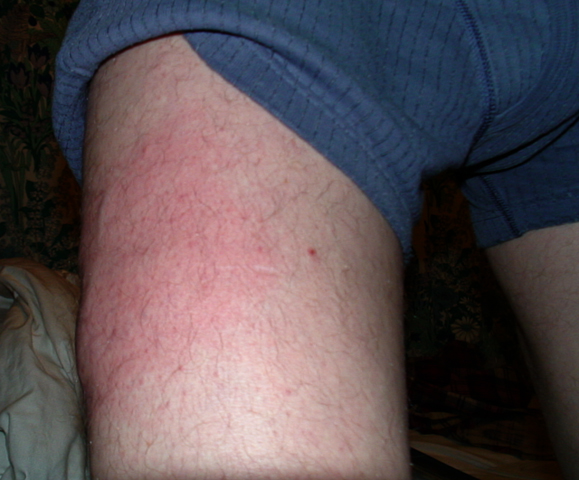 This photo was taken some 4 hours after the incident. And hopefully I'm not as drunk as I was during that viciously violent ramble about the evenings events. Pissed off is an understatement.

The booze only happened after arguements at a certain news agency about the way the footage would be reported on, and I pulled the footage, not happy with the outcome. No food for me this weekend, not unless the other job gives me a God Drop.

This photo will be passed on to the National Union of Journalism, but I know now that nothing will come from it. Purely because I myself remember very little from the situation. Like who hit me and their number. As I said in the previous report, I remember a knock but that's mainly it. I remember that I was surrounded by police and not one protestor. That is why I mention numbers. The only people around me had numbers on their shoulders. But that itself, is an uncommon concept these days, as anyone at the Scotish G8 and other more recent events will concur.

Only when I climbed the escalator at Camden, heading for the AP office did I register the pain coming from my leg. By the time I made it home, after good cheap Spanish food and several glasses of mescal, this photo was the outcome.

Whether this injury was sustained by a baton or maybe a right good knee into muscle, I do not know.

But this is becoming a regular occurance against journalists, including those holding NUJ press cards. And if it is getting like that for us, with ID, what's it like for the others? The activists? The protestors?

Well, it turns out the eight arrested ended up in a police cell for nearly 48-hours on minor charges. So I am informed, for such minor offences, this is illegal. Also, they were constantly told the lawyer's office they tried to contact was not answering. They sat there for nearly two days with no legal representation.

When I heard of such things in Russia, during this year's G8, and stood outside the courthouse in St Petersburg and watched concussed men being led onto a grey police bus for convicts, and witnessed the closed courts and lack of food and water, and the beatings and demostration bans, I kind of accepted it, saying what do you expect from Russia, or Putin?

Nothing had changed there in all these years, apart from the poor had got poorer. And AIDS was in the frenzy of a major epidemic.

And the memories came flooding back, a beautful city marred by authorative dirt. Here we were again, but this time on UK soil.

Scotland Yard press office said the protestors stormed the embassy and injured two of their officers. Only then did they attck. I did not see this. What I caught on my camera in the only time I could concieve this of happening was one officer yelling, "Get back and you won't get hurt."

He then proceeded to knee what looked like a young girl in the stomach. Then it all broke loose. Police shoved protestors, protestors shoved back. The protestors ended in the road, were surrounded by police and accused of blocking a public highway, the very road they had been forced onto by the police.

You know the rest. Aggression, violence, protestors on the floor, jumped on by three or four police officers - then gone, disappeared for two days.

One photojournlist was punched and shoved away from gaining any evidence of police brutality - so much for the Met-NUJ guidelines - and the result for me was this injury and nearly two days of reading comic-books with frozen peas taped to my leg, banned from work or stress by doctor and girlfriend.

The previous victim of police violence at Sack parliament, Marc Vallee, was gone before I could grab a few words from him on that night's policing, baring in mind it was he who stated this was going to end up bad several minutes before it all went down.

There is now another protest organised for the Mexican Embassy today, at 5pm - same time same place, I was told. The released from prison today went straight back to the embassy to finish off what they started before their rude police interuption.

Me, I'll be there again. And so will many others. Maybe more than last time. There is a sense of urgency here. For the people of Oaxaca. For all the people of Mexico. For Brad Will. It is just yet another struggle in the blinding horizon of a million causes and struggles.

More people died in Oaxaca today, more in Iraq, more in Afghanistan, more in a thousand different places, many we cannot even locate on a map. That is why this must continue, no matter what the authorties do.

I have argued this case more and more. What good does protest do? Any who ask that question should see how many just 30 or 40 protesters gathered around a police cordon, asking what was going on and why.

I was told by one tonight I was thought of as a hero, because I got injured. This I snapped at. And would do to anyone who says that. No. I'm no hero. To tell the truth I'm a coward, and that is why I've only sustained three injuries in the last year. If I was braver I would have probably sustained more.

This is not heroicness, only studipity. I got in the way and I got hurt again. This is nothing to write home about. It's dumb and I feel an idiot for getting caught again. But what it does do is make me say this will not stand.

As some have said to me in the past, why do you think a press ID makes you any different. And they are right. Why does a piece of plastic protect you? Why should it? We are all the same. And in the eyes of this authority we are all cannonfodder. Lambs to the slaughter.

But the only thing to pull form all of this is if a registered observer of events can be beaten on several occassions, - many I know can tell you worse stories than mine, some can't tell you anything, they're dead, 132 in Iraq - those who are supposed to be protected are not, then what chance does that give any activist or protestor have, no matter how peaceful, who have no rights left at all?

You protest, you're antisocial, held under the terrorism act, beaten, kicked, punched, arrested, withheld legal access, not given food or water, interogated at gun point and told a "black man should not mess in white man politics". This has all happened in recent months in the UK. It has probably happened before, we just never heard about it, or I was too young to remember. But it sums up the extent of our freedom, our freedom to protest, to have a say more than one tick in a box every four years.

That is your freedom. Now, shut up. Here's Big Brother. Be entertained. Enjoy. And keep drinkning beer, you morons. 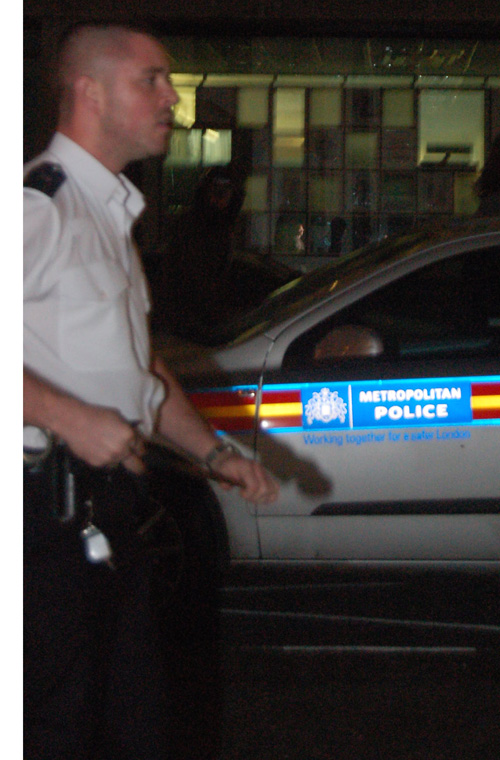 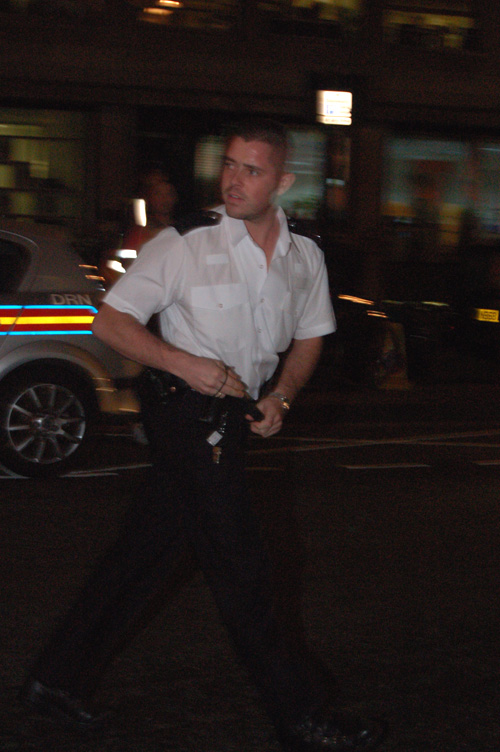 I saw this police officer use his telescopic baton on a protester and on fellow press members that night but I was too late to get the short and only got him walking away. You can see him holding his baton.

It’s getting a lot harder to document these events and to keep safe. A very sad thing indeed.

I think that's who I remember seeing put his baton away, but I only saw him from behind and from a distance as he walked back towards the police vans at Hanover Square.

injury on thursday morning and apologies 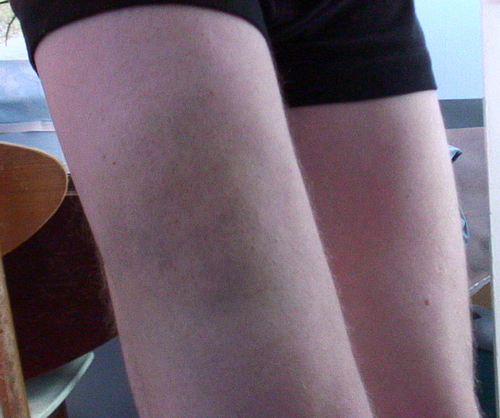 Thursday morning - at least the underwear is more presentable

Forgot to mention, apologies for the original shocking image. I know it is not nice for many to witness this, but I promise to buy some new underwear and get some sun on my legs sometime in the near future.