This is the big push forward to demand Justice for Cleaners: an international campaign for the right of cleaners to organise within ISS - one of the worlds biggest multinational Cleaning Companies. 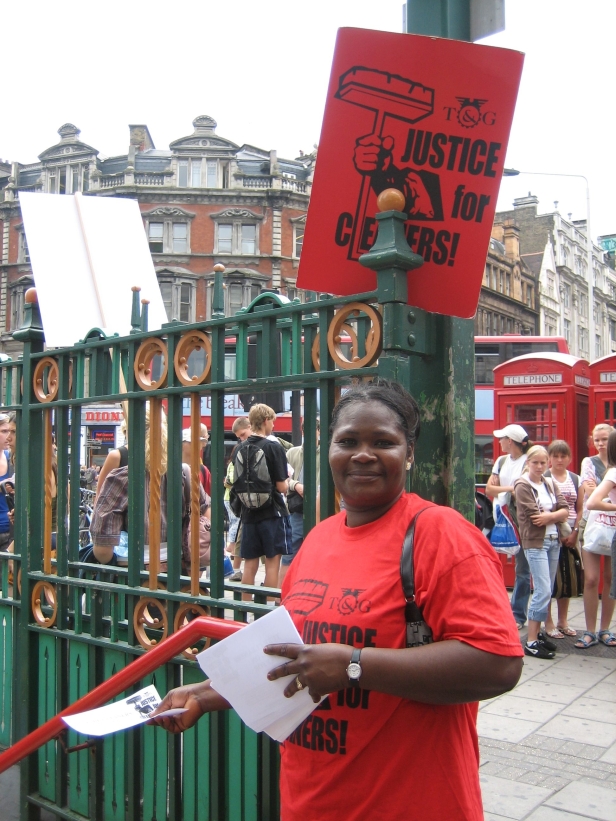 
This is the big push forward to demand Justice for Cleaners: an international campaign for the right of cleaners to organise within ISS - one of the worlds biggest multinational Cleaning Companies.

Two weeks of action to force employers to enter into meaningful negotiations with unions around the globe - come and help out with this exciting campaign.

… Do you care about the injustice faced by low paid migrant workers?
… Can you spare some time to help out in this campaign (however little)?
ßDo you want to get some experience as a union organiser?

If so, let us know. Come along to the next London organisers meeting on Wednesday 15th November @ 6.30pm at the TGWU (address below) to learn more about this campaign and how to participate .


The 'Justice for Cleaners' campaign is part of an international alliance of unions representing mainly migrant workers. These workers are taking on the biggest building services contractors (and their clients) in the world. The objective is to apply massive pressure on these companies who are paying their cleaners poverty wages.


Since this campaign began in London, T&G have organised workers into activists that have fought and won for increased pay and conditions at: The House of Parliament, Canary Wharf (Morgan Stanley, Citigroup, Lehman Brothers, Clifford Chance, and HSBC) The City of London (Linklaters, Nomura, KPMG, Barclays, Merrill Lynch, The Gherkin, Deloitte, Price Waterhouse Coopers). On the London Underground, a campaign resulted in one company (Blue Diamond) losing it contract . This was the first time a contract had been aborted on the London underground, with the contract lost worth over £21 million pounds.


But this campaign in London is still young, and we need your help.


T&G and affiliate unions abroad are targeting ISS cleaning services. ISS are the biggest building services company in the world. ISS operate out of 42 countries with their head office in Denmark. The overwhelming majority of their workers are migrants with many on the minimum wage. ISS Cleaning Services are part owned owned by the global investment bank 'Goldman Sachs'.


In London, ISS have contracts in universities, hospitals, the underground (including the depots), financial institutions, law firms and department stores. We are asking for your help in our actions against ISS.


From Monday November 20 till Monday December 4th the T&G and affiliate unions are coordinating a series of global actions against ISS. Our aim is to organise 2 weeks of mayhem - the details of which are not appropriate to detail over the email.

To do this we need a strong, steady army of activists. During this campaign we can continue to build the network between academics, students, activist groups and migrant workers.


If you're interested, please contact me with the details of when you can be available during November 20th & December 4th.

On Monday November 20 there will be a day of civil disobedience training at the central office of T&G.

The actions start around 8am till about 6pm each day. Please detail in advance the days and times you can participate. Expenses will be covered by the union.


Please help out by doing at least one of these things:

1. We have our team meetings on Friday mornings at about 11am, so if you're curious about the campaign and / or you would like some input (creative ideas about collective actions very welcome) It would be great to see you. To become involved (or if you have any questions) contact me on:

2. Come along to the next London Organisers Network Meeting on Wednesday 15 November at 6.30pm at the TGWU, Transport House, Theobalds Road, Holborn.

3. Circulate this email to people you know who might be able to help - your friends, students, trade union activists and branches and any other activists you know.

Don't organise against other unions

Full support to the T&G's efforts to organise cleaners in various workplaces - but not on London Underground, where the RMT organises them.

RMT has sole recognition in ISS on the Underground - and throughout the rail industry nationally. That's because they are railway workers, and RMT is a union for all grades of railway workers. The T&G's efforts to recruit here are divisive, and welcomed by the bosses!

Come on, it's not like there's a shortage of cleaners to organise elsewhere: so the T&G should stop trying to wreck the RMT's organising efforts.