Who do you have to kill to get an invite?

Halloween is a complex tradition, and different people choose to celebrate it in different ways, but this year in darkest Westminster there were some particularly spooky events, and an unusual array of ghouls. 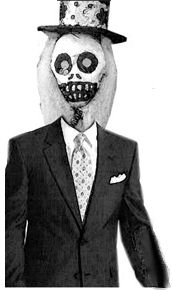 Possibly it had something to do with the two-day conference which had just ended, next door at the Royal United Services Institute, where the UK’s mercenaries club (the BAPSC) had been discussing topics like "how to keep getting away with it", and also "how to (para-)militarise the aid-NGO sector".

In Parliament Square there were around 300 wellmeaning people at a Stop The War Coalition rally (police-authorised, of course) which was politely asking the warmongering Labour government to investigate its own wrongdoing - unsurprisingly there were no Treats for them that night.

Beyond Parliament Square, down a quiet side street - just outside the reach of the SOCPA Free Speech Zone - the only hint of unusual activity at the Royal Horticultural Hall was two stacks of crowd control barriers, they weren't there to keep out guerrilla gardeners, but because a sumptuous banquet was being held in honour of the world's most profitable euphemism - the ‘defence’ industry.

The 2nd Annual Halloween War Industry Banquet was not heavily publicised, perhaps as a result of protesters targetting previous corpse-machine soirees, including 2005’s inaugural banquet, at which the Minister for Defence Procurement, Lord Drayson proudly told attendees that "The equipment that we buy for our armed forces doesn't stay on the parade ground being gently polished – it is used in action. This provides the UK defence industry with great advantage."

State of Emergency had discreetly called a picket to coincide with the arrival of the diners who were warmly greeted with shouts of "Who died for your dessert?", "Don't forget to wash the blood off your hands before you eat.", "We hope that you choke", etc. To begin with there was no police presence but eventually a dozen turned up and picketers were told "You know the rules, you have to be on the other side of the road." The picketers defiantly stood their ground for over an hour, in apparent ignorance of The Rules. There were no arrests.

Later picketers returned to wish the diners a fond farewell as they left the building, private security staff attempted to shove them off the pavement saying that "the police have given us permission to move you", an usual extension of police powers to say the least. Two PCs quickly arrived and tried the usual li[n]es about having to move or be arrested and shove people around.

More police arrived with each passing minute and soon a police Inspector appeared and instructed PCs to search each of the picketers under s44 of the Terrorism Act, since they were "present in the Government Security Zone", and they proceeded with the search, asking each person: "Have you got anything on you that you shouldn't have? Any weapons?", as usual without a hint of irony.

A few hours later, in a Camberwell nightclub, a man was shot dead with a submachine gun, originally sold to an undisclosed army in a deal brokered by a UK dealer, before being smuggled into Britain, but the defence industry won't lose any sleep over that.

About State Of Emergency:

The ongoing war in Iraq has killed an estimated 650,000 people. Thousands more have died in Palestine, Lebanon, Afghanistan and elsewhere. This “war on terror” is nothing more than the latest campaign in the continuous war of the powerful states against the poor, and has led to pervasive surveillance, biometric ID cards, increased police power, repression of dissent, and armed house raids to subdue resistance. Those behind the “war on terror” have ignored countless mass demonstrations, lobbies and petitions against their destructive policies. That is why increasing numbers of people are taking action to impede the war machine. Army Recruitment events have been disrupted, airbases invaded, and soldiers have refused to serve. The Arms and Oil companies whose quest for profits drives war have also not been spared, with offices occupied and factories blockaded. You can do more than just demonstrate your anger at government policies, you can act to actually stop the war at home and abroad!

So what is ‘State of Emergency’? STATE OF EMERGENCY is a call to action, a common banner to organise our resistance to the aggressive and repressive actions carried out in the guise of the “war on terror”. Recognising that the state of emergency in which we live is not the exception but the rule, we come together in solidarity, discuss and organise actions to undermine the ability of states to continue their policies of murder. You can get involved by coming to weekly meetings of a State of Emergency group in London, or by emailing us, or visit our website for ideas and resources. If you live outside London you and your friends can start holding your own meetings, and take action against the military machine in your local area.

Take part! Stop them continuing their wars. We meet every Tuesday at 7pm in LARC, 62 Fieldgate St, to plot and plan.