You are invited (at rather short notice) to; 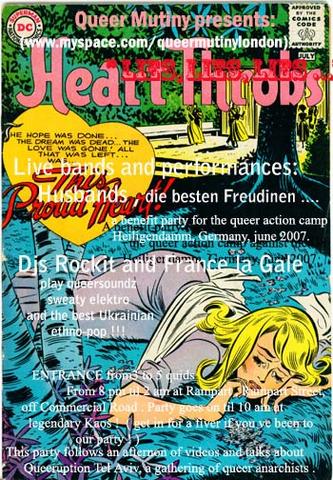 You are invited (at rather short notice) to;

On saturday the 3rd of february , starting around 1pm til 8 pm, we
will show movies about Palestine and Israel, have people talking
about their experiences at Queeruption 9 and in the Palestinian Occupied
Territories, we will watch videos and share food like yummie falafels
and houmous ! All money raised will be sent to a ( not decided yet )
organisation in Palestine.

You are very welcome to pass by for an hour or for the day !
The event ( and the party following it in benefit for Queers against
G8 - ) will happen in the newly refurbished RAMPART , Rampart
street , off Commercial Road , East London .

MOVIES :
Around 1 pm : IZKOR , SLAVES OF MEMORY.
A film by Eyal Sivan.
Izkor means remember in hebrew and this film looks in depth at this
imperative that is imposed on the children of Israel. In Israel ,
during the month of April, feast days and celebrations take place one
after another. School children of all ages prepare to pay tribute to
their country's past. The collective memory becomes a terribly
efficient tool for the training of young minds.
This award-winning film put forward a passionate and severe analysis
of the Hebrew state.