Climate activists splatter oil across photo exhibition in outrage at Shell greenwash tactics.
Today at the Shell-sponsored Wildlife Photographer of the Year exhibition at the Natural History Museum, 20 activists inspired by the Camp for Climate Action (1), smeared oil over the photographs. This was an act of outrage at Shell’s painfully transparent attempts to greenwash its reputation via cultural sponsorship.

Shell's sponsorship of the Natural History Museum is deeply ironic, since it devastates wildlife and the environment around the world through the extraction and production of ever more oil and gas.

Today's action comes hard on the heels of the release of Shell's 2006 financial figures, documenting the 13 billions of pounds made at the expense of people and the planet. Shell’s activities extracting oil result in major ecological and social impacts. Trading 3.6 million barrels of crude oil equivalent a day, the company is also a major contributor to climate change, which has been predicted to wipe out a quarter of all species on the planet by 2050, and to devastate the poorest regions of the planet (2). The extent of the threat was highlighted on Friday with the release of the UN's Intergovernmental Panel on Climate Change fourth report.

For all these reasons, the climate camp activists are calling on the Natural History Museum to end its oily sponsorship deal with Shell.

As the black oil-like liquid has been spread over the glass covering the photographs, the activists have not damaged the work itself. As Dan Baker said, “This is not an attack on the work of the photographers. Shell does not deserve to have its name associated with their beautiful images.” A banner reading “Make Nature History Museum - sponsored by Shell” was also unfurled.

Activist Daisy Williams said, “This action sheds light on the ugly stain that covers this exhibition as a result of the Museum's collusion with Shell. We're here to make sure everyone knows about this despicable greenwash sponsorship deal. With more public pressure, we can kick Shell out of the Natural History Museum!”

A little supportive protest in Aberdeen 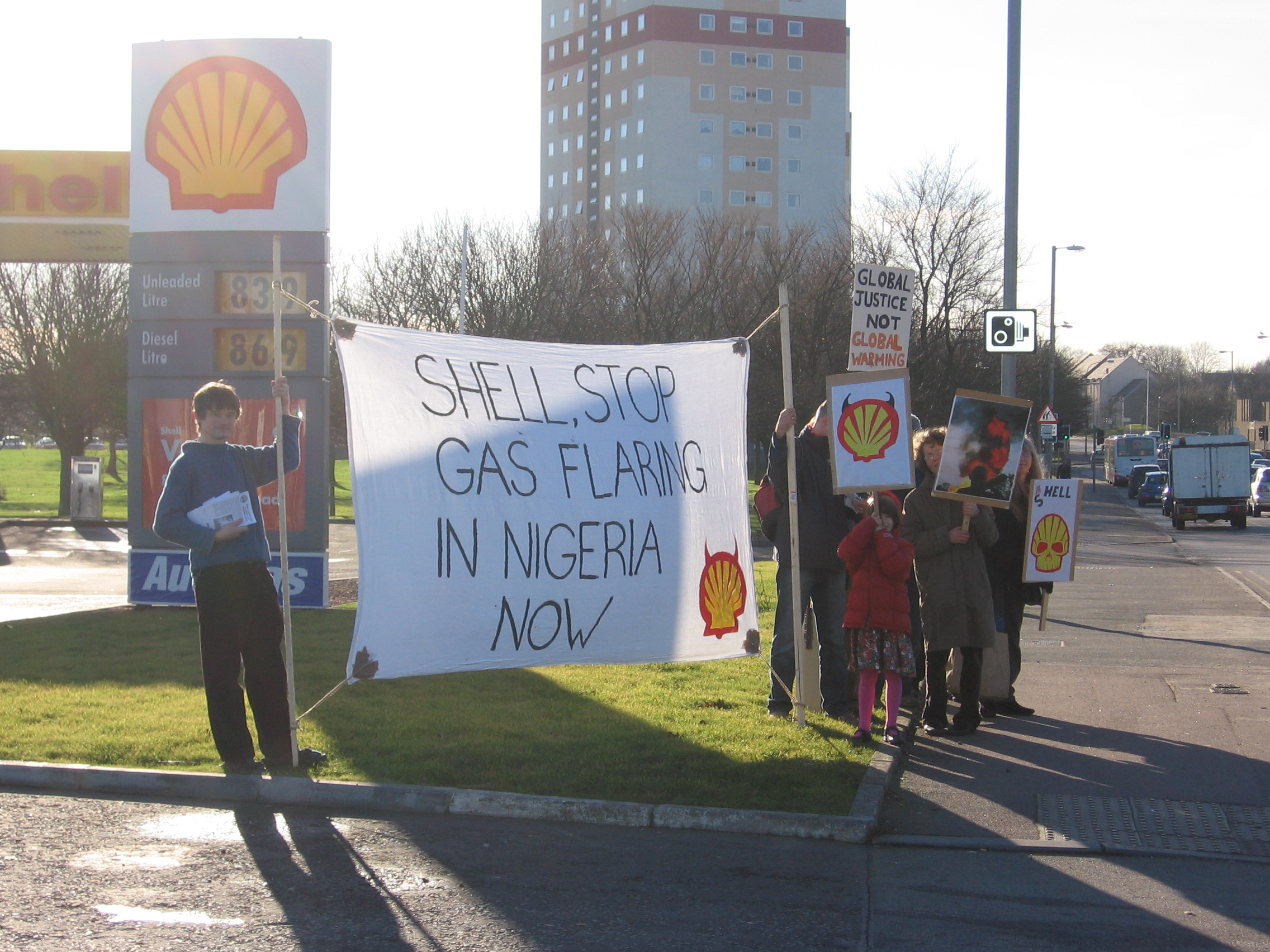 Well done! Ten of us held a protest outside a Shell petrol station in Aberdeen at the same time, with a large banner and placards, and we mentioned the London action in our press release, too.

CAN YOU HELP US EXPOSE SHELL'S WILD LIE?

Shell is the third largest oil company in the world.

It is also the new sponsor of the Natural History Museum’s Wildlife Photographer of the Year exhibition.

Despite attempts to ‘greenwash’ its reputation via blanket advertising and cultural sponsorship, Shell is still heavily implicated in producing ever-greater quantities of the oil and gas that are destabilising our climate to such an alarming degree. Climate change is set to wipe out millions of plant and animal species and to devastate the poorest regions of the planet. Shell’s activities also result in oil spills which are major causes of death and destruction for many varieties of life. Its planned refinery and pipeline project in County Mayo, Ireland, threatens a pristine ecosysystem, not to mention the homes and livelihoods of the inhabitants. Lastly, Shell is currently constructing a massive development at Sakhalin Island in Russia which is threatening the survival of the Western Pacific Grey Whale. For all these reasons, Shell should not be sponsoring the Wildlife Photographer of the Year exhibition. We call on the Natural History Museum to end its sponsorship deal with Shell.

1.) Help get the word out, either with more copies of our postcard, or by contacting people – particularly photographers – who might be up for helping out or contributing images to our ongoing counter-exhibition (see 2.)

2.) We've put together a 'Shell's Wild Lie' counter-exhibition, which paints what we hope is a truer portrait of Shell and of wider climatic impacts on people and wildlife. We've taken it around the country as well as to the gates of the Natural History Museum (on the 11th anniversary of the murder of Ken Saro-Wiwa in Nigeria, November 10th 2006), and it's now available to borrow if you're running an event where it might be appropriate. It's also up online at www.artnotoil.org.uk/gallery/v/shell

Friends of the Earth UK is also campaigning on this issue: see www.foe.co.uk/shell