Murdering Medical Careers - and the future of the NHS?

For the second time in two weeks, a day of action was organised to protest against attacks on the NHS. But this time, it was doctors and their families, demonstrating against a government-imposed program called "MMC: modernising medical careers" that is meant to shorten the length of training and increase the quality of service provision. Instead, it is being described as a "disaster" that will decrease experience, decrease education, decrease career opportunities, worsen patient care, destroy research opportunities and disempower doctors and patients alike. Medics of all types, not generally noted for their militancy, are up in arms, with a number of independent websites such as Remedy UK, Mums4medics, MMC-360 and Mangling Medical Careers all coming online in recent weeks and around 12,000 people taking to the streets of London on Saturday [report, pics: 1 | 2 | 3 | 4 and video].

To find out more about the background, read MMC: an explanation for patients [parts 1 | 2 | 3 | 4 ]. Other sites of interest include the MTAS debacle, as witnessed by the junior doctors of the Norfolk & Norwich University Hospital, and various artistes of the blogosphere such as Dr. Rant, Professor Scrub and Junior Doc. Maybe there will be an NHS in 10 years time, after all. 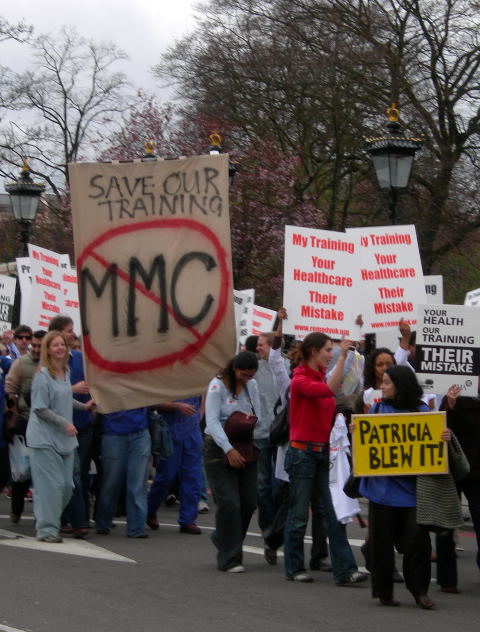 great, but beware of your allies

Its great that some of the medical profession is rebelling against the Govts agenda of targets and cuts, but i would caution them about who they're allies are: i has a look at the links for Dr Rant and most of them were small c conservative 'no big govt type' outfits. I also think inviting Cameron to speak at the demo was naive in the extreme; do they really think he has the interests of the NHS at heart and even if he has, his party certainly hasn't...

Where were the police this time?

Looking at this march on TV the usual hordes of accompanying police appeared to be absent. Does this mean that the police actually discriminate between respectable demonstrators and what they probably regard as unwashed dole scroungers?

response from a marcher

Quick response to the above two comments: yes, the police were there, but as I overheard one person say, it is unlikely that doctors would have the guts to do anything too outrageous given that most are police-checked prior to starting work (i.e. on at least an annual basis). Also, the numbers of police may have been "diluted" as there were at least 3 times as many demonstrators as anyone expected - RemedyUK had forecast 1000 initially, then up'ed their estimate to 2000 when they had a lot of interest in the week or two preceding the march.

As for allies - again, RemedyUK claims to be apolitical, and said that they invited speakers from all the major parties, "however, only 2 out of 3 accepted the offer." I would agree that a huge amount of cynicism is needed when hearing that DC was there (don't wanna promote his name any more than you do!) but actually he probably got less applause than any of the doctors who spoke and certainly was not the final speaker. In addition, his comments were plainly neutral politico-speak and did not address the concerns of the doctors present. The libdem guy was probably better, but full kudos to Collette Marshall and Clive Peedall - both doctors - who were much more militant in saying that doctors should take action. Indeed, they both lead by example, I believe: Marshall was one of the group of consultants from the West Midlands who refused to take part in interviews for the flawed MMC process.

The BMA’s Junior doctors Committee (JDC) has withdrawn from the review group trying to resolve failures of the Medical Training Application Service (MTAS). The decision was made because the latest solutions proposed in the group were unacceptable to the JDC.

Under the proposed solution doctors would be restricted to one interview. BMA research indicates that this could disadvantage over 11,000 doctors who have been offered more than one interview.*

The JDC believes there are now only two acceptable solutions – for all doctors to be interviewed for all the posts they applied to, or for the whole system to be replaced.

“We have worked hard with the review group to find a solution which would select the best doctors for the right jobs in a fair way. However, we cannot sign up to what has been proposed. Restricting doctors to one interview would not be acceptable to the11,000 applicants who have already been offered more than one, and would now see these opportunities taken away.

“Anything that is not fair on junior doctors will crush morale and drive many away from the NHS. We will continue to express to the government the urgency of a solution that is acceptable to 33,000 increasingly angry doctors whose careers have been jeopardised by this shambles of a system.”

In view of the decision of the BMA Junior Doctors Committee, the chairman of the BMA Consultants Committee will also cease his attendance at the review group meetings.

1433 junior doctors who had applied for posts through MTAS responded to a survey on the BMA website. 526 (37%) had been offered no interviews, 388 (27%) had been offered one, and 519 (36%) had been offered two, three, or four, and would therefore lose opportunities under the review group proposals. Extrapolated on the basis of the 33,000 total MTAS applications, this would equate to 11,880. However, it is likely that the figure is higher than this as doctors with no interview offers would be most likely to respond.

Hi I was at the Glasgow rally and was seriously shocked. I can not understand how our little rally important as it was received so much more press coverage than the London one. How can a protest that was twice the size of our one not have interested the press. The Glasgow rally almost never took place, I am just so glad we gave this issue enough of a Scottish slant to get the press interested.
As for the police point. There would have been the same amount of police for any march, the reason Glasgow was a rally and not a march was because we could not get the right amount of police to cover at such short notice. Thanks for everyone who supported us though.
Also if any press are interested in publicizing our cause or want an human interest story about it please get in touch Remedy UK has my details