Last summer, over 600 people converged outside Drax coal-fired power station for 10 days of sustainable living and collective education, culminating in a day of mass action against Drax. This year, the Camp for Climate Action will pitch its tents near Heathrow airport.

There will be a day of mass direct action aiming to disrupt the activities of the airport and the aviation industry, but in the interests of public safety there will be no attempt to blockade runways.

Although the location is different, the philosophy of the camp remains the same: to be a place for the burgeoning network of people taking radical action on climate change around the country to come together for a week of low-impact living, education, debate, networking, strategising, celebration, and direct action. The camp will feature over 100 workshops covering topics such as climate change impacts, carbon offsetting, biofuels, peak oil, permaculture, practical renewables, campaign strategy, skills for direct action, and much more. Run without leaders by everyone who comes along, it will be a working ecological village using renewable energy, composting waste and sourcing food locally. 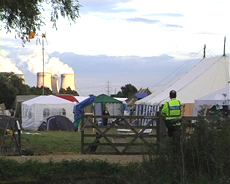 Aviation is the fastest growing source of greenhouse gas emissions in the UK, and all our efforts to tackle climate change in other sectors are undone by the massive growth in air travel. Holding the camp at Heathrow aims to highlight the lunacy of the government's airport expansion plans, target industry giants profiteering from the climate crisis, and raise awareness of the need to fly less. The camp will also support local residents in their long-term struggle against the building of a third runway and the destruction of their communities.

It all comes down to us, now. We are the last generation that can do
anything about climate change. In 20 or 30 years time, should we not
change our ways, we'll be committed to emissions increases that will see
forests burn, soils decay, oceans rise, and millions of people die. If we don't get this issue right, so much else is lost too.

We still have time, but not for long. Make it count.

Heathrow airport is the venue for this years climate camp. It was decided on after a long, sometimes difficult, sometimes uplifting meeting last weekend.

The idea that the camp should focus on aviation as an issue has been discussed a number of times by the camp gatherings. It was first discussed in Leeds on January 13th/14th. At this meeting lots of people stated a preference that the camp focus be on aviation although many people also raised strong reservations. At the next gathering (Leeds, February 17th/18th) these concerns were raised again and the land group were sent away to look for a site with a set of preferences: Oil, Coal and Aviation. Aviation had been relegated to least favoured due to three major concerns.
Firstly, it would be to noisy, making workshops impossible, secondly it would be too dangerous and thirdly it would mean a focus on the individual consumer rather than on corporations.

At the Liverpool gathering the land group reported back and indicated that among all the options they’d looked at they had found a viable aviation venue that they would bring forward for us to look at. They reported that our concerns could be answered; The site would be far enough away to avoid the noise problem and the focus would be firmly on corporations rather than individuals.

Finally, when the option was presented in London they suggested it should only be chosen if the camp process was willing to agree to a safety policy of not blocking the runways.

So, the Heathrow option was put in the mix with five other options and was chosen as the camp’s next location. There were a number of strong reservations expressed but in the end, whilst no one objected to the other options, there was less enthusiasm for them and Heathrow was chosen.

Why Heathrow? The area is the centre of the aviation industry, the big pushers of aviation expansion and the third runway so the focus remains firmly on the corporations. In terms of climate impact (CO2 plus the additional effects of emissions at altitude) Heathrow is even bigger than Drax. There are not words to describe the injustice and darkness of pushing for the expansion of a polluting sector whilst hundreds of thousands are dying in poorer nations as a result of climate change. The big players such as BA and BAA are pushing to build a third runway. This will involve bulldozing the entire village of Sipson - over a thousand homes. Yet more enclosure in search of the global city. Forget building new airports, the debate should be about radical cuts in emissions, closing capacity and just transition.

So that’s it. Our enemies are gathering forces. The industry lobby group Freedom to Fly are about to re-launch with a no-compromise agenda on expansion based on the idea of freedom and jobs. What does freedom mean?
Ask the residents of Sipson and the peasant farmers of Sudan. The next Climate Camp organising meeting is on June 16th and 17th in Manchester and there is a ton of stuff to do to make the camp happen so contact us at this e-mail address or just come along if you have any time to give.