Renewable Energy at the Climate Camp

Video and text showing a summary of the different renewable energy being used at the climate camp. Sharing skills and knowledge of how to survive without mains electricity.

(i'll tidy up and caption the photos later) 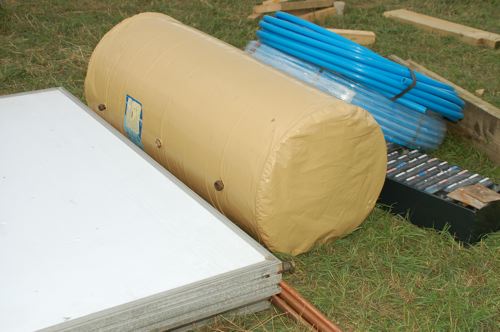 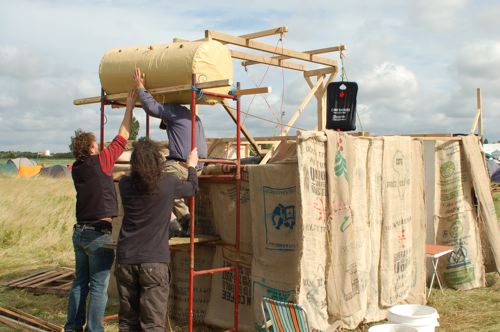 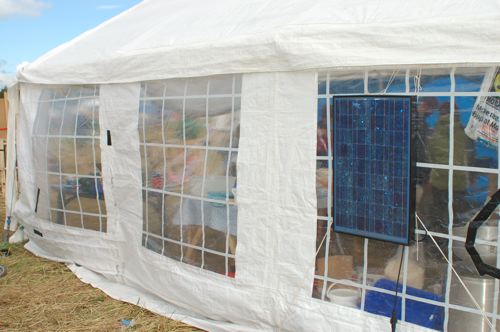 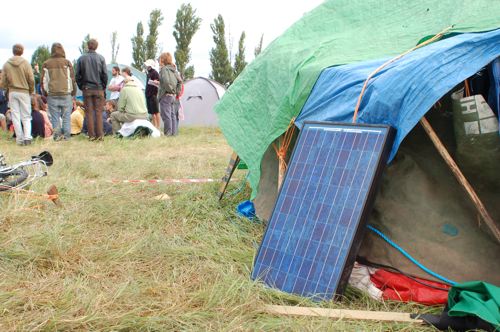 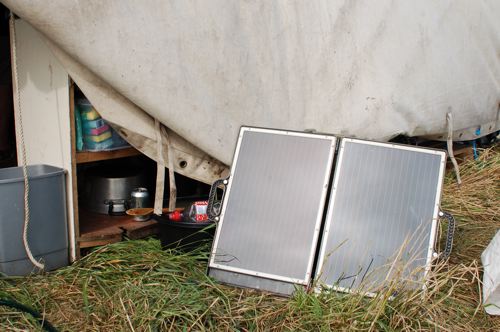 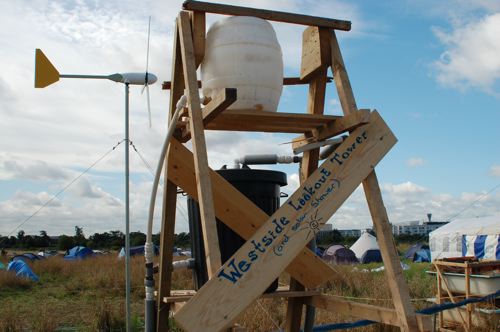 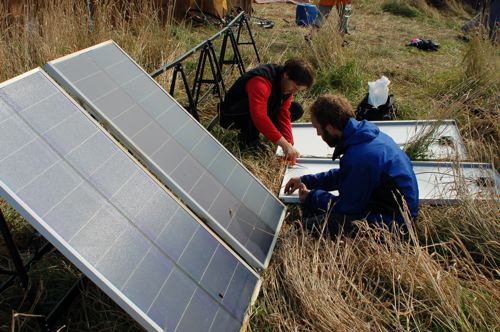 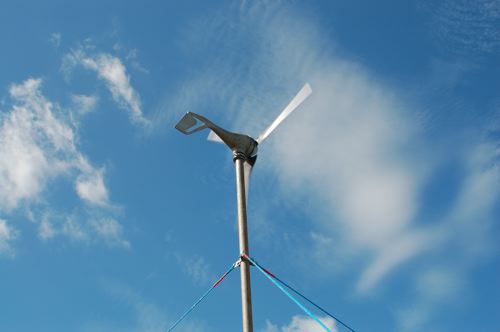 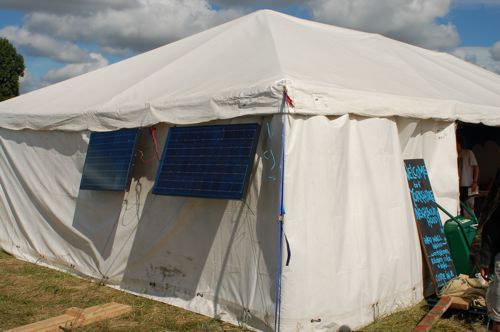 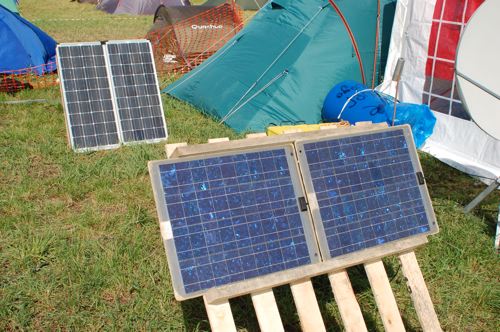 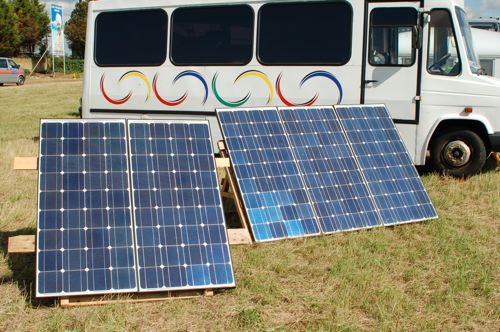 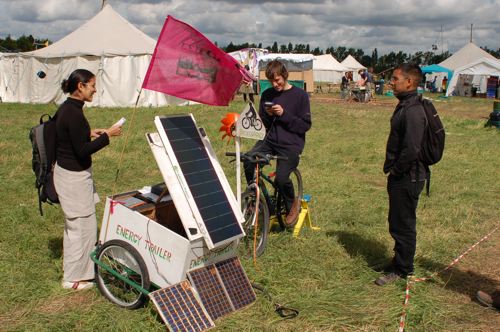 At around 8am this morning I saw a couple of police following a group of people pushing a large cylinder in a wheelbarrow south through the camp towards the airport. Could it be a lockon device intended for a blockade I wondered? No, it was a domestic water heating cylinder and shortly after people walked by with a load of pipe and then three solar water heating panels.

I decided it would be good to document the renewable energy systems being used on site and went to fetch my camera before returning to take some pictures and find out about the system they were putting together.

Along with the 166 liter tank and the three 1m x 1.5m double glazed flat plate collectors, they also had a smaller header tank with a ball cock. I was told that the system would initially power two shower cubicles but they might double the number if it appeared to be powerful enough. They referred to the design as an indirect thermal store system and guessed that they'd have around 1.5kw of heat available.

Wandering back north through the site I was surprised and pleased to find another solar shower being being built in the West Side neighborhood . I'd spent a couple of hours with them before I arrived on site while held and the police road block during vehicle searches last sunday night. They had purchased a wind turbine much like mine while at the big green gathering and erected it for the first time at the climate camp. It's rate at 300 watts at quite low speeds for a bargain 300 pounds including the mast, guys, stakes, charge controllers, everything. Theirs is the 24 volts version and they using it to charge the bulk of their 500 amp/hrs battery bank - mostly used for lighting in their neighborhoods communal spaces. Additionally they have a couple of small solar panel's which they use to charge one of their batteries at 12 volt which they've been using for their little sound system. But I digress - back to their solar shower, it's pretty much all made from reclaimed materials - the flat plate collector was built from an old central heating radiator and has been placed in a glazed frame that had previously contained a menu displayed outside of a restaurant. The header tank was a home brewing barrel and the main tank another barrel inside a bin and insulated with fiber lagging. The whole thing was erected on a framework of reclaimed timber.

Next to West Side I found the Scotland neighborhood which had a single 40 watt panel charging a couple of deep cycle leisure batteries in rotation and being used for lighting. Likewise, East Side had just one panel being used in a similar way. The Yorkshire neighborhood (rumored to be serving the best food on site) had just two panels supplying a healthy 100 watts max while the South Coast neighborhood had three 63 watts unisolars panels. These seem quite popular on site despite their large physical size, and are apparently more environmentally friendly to the manufacturing technique which apparently involves spraying silicon onto the panel rather than using actual crystal wafers.

Passing the Manchester neighborhood I found them starting to set up a pretty massive array of six of the unisolar 63 watt panels. In total, this system would provide 380 watts in optimum conditions and I was told that the technology used was particularly suitable to the cloudy conditions would in the UK. Charing a 660 amp/Hr battery bank, their system would clearly be more than capable of providing all their neighborhoods needs so they were planning on providing their surplus power to their neighbors.

A similar situation was found at the Westminlands neighborhood. Their little 400 watt wind turbine was loving the high winds found on site this week. This particular type of generator performs badly in more typical wind speeds but the last few days has seen it frequently knocking out it's maximum output. Along with their wind power, they also had 120 watts worth of solar panels and as their own power needs were quite modest they were doing what they called 'roving battery charging' and charging up batteries for other people on site.

Taking a break, I stopped off for a piss and noticed that all to the toilets on site (and the central kitchen) where equipped with a small stand alone solar panel and battery to supply lighting. Meanwhile 'V3', who run courses on wind energy, have two 58 watt panels and a 500 watt home made Huge Pigot designed wind turbine. They've been charging other peoples batteries but a site wide shortage of spare batteries has left their wind gene sitting idle for much of the time.

The two big providers on site dwarf those found in the neighborhoods. Ray-Mundo is supplying the indymedia open access suite with another 1,150 watts of solar and a 2,250 amp/Hr battery bank. Meanwhile, the gigantic Generator X truck has 1.5kw of solar and a bank of batteries equivalent to an incredible 3,000 amp/hr. The original plan for the camp site layout placed the major power providers near the biggest uses of power on site but due to the police preventing vehicle access to the camp, both these trucks have been parked in the adjacent field (also being used as the police car park).

Back at the indymedia tent there is power rig that I bought along from the rampART social centre. This system consists of a 600 amp/hr battery bank plus a 300 watt inverter. Power is generated by 220 watts of solar and a 200 watt turbine. The Chinese made turbine is very similar to the one used at the West Side Neighborhood, but rated at 200 watts not 300. Both are designed to produce their rated power in fairly low winds so have been maxing out a lot of the time during the time at the camp. While the Ray-Mundo system has been providing the power for the open access internet suite, the rampART system has been powering the laptops used by those editing and uploading multimedia work. On the wednesday night the system was pressed into service to power the PA and the lighting in the main marquee during the ceilidh.

I've probably missed a few of the system's on site. Even as I type, another big wind turbine is being prepared to be raised and the Col-Tech generator is expected to arrive some time this evening to take over supplying the main marquee.