Local View Of The Climate Camp

A local view of the airport, BAA and Climate Camp 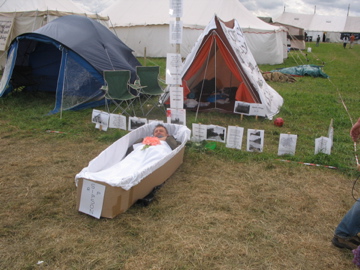 Living nearby the airport i've got a few friends who rely on the place for work. I've even worked there myself (during the early phases of the Terminal 5 (T5) construction in 2002-3) and it's because i remember the claims at the time that if they had another terminal they wouldn't also need another runway that i'm very suspicious about BAA claims now.

Indeed, when i first worked there, i was told by colleagues that they had been instructed not to even let on to locals that the work was going on - although they were already up and running on site, this was prior to the political announcement so they were supposed to keep quiet! I should stress that this is only what i was told by colleagues, but i have no reason to doubt them.

Therefore, because of my impression of the difference between rhetoric and reality for BAA, i decided to support Climate Camp because i think they have T5 and enough is enough. I'm also worried that if they take Sipson today, who's to say they won't take Feltham (or wherever) tomorrow? Where will it all end?

I've been on and off site since Tuesday and have been impressed by the amount of work going on to further the cause and vision and determination of all attendees who have come together to achieve all this already. Everything from waste-recycling toilets to a full rafter of educational workshops takes organising, and i applaud everyone who's come together under the Climate Camp network for their achievements.