Leaving the camp around 3pm and trying to get to BAA, whilst some people were attacked by police with batons for attempting to exit the field, a group of around 100 protesters were eventually surrounded at the eastern edge of the field and later escorted back to the site 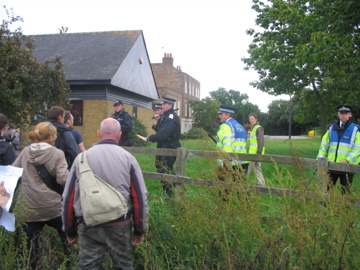 Police and protestors - 'this is what democracy looks like' 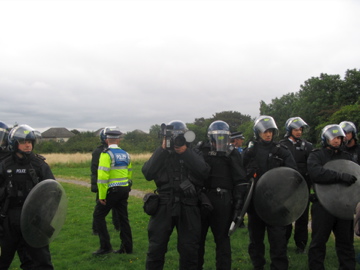 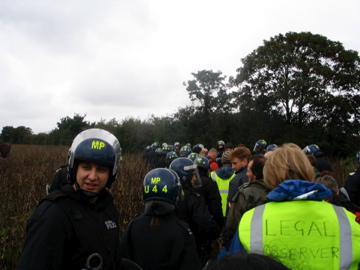 herding us back to camp - they've cheered up a bit now

We left camp in a southeasterly direction and we soon encountered police on horseback and foot. As the people at the front of the group neared the road they were confronted by a number of police on horseback, in addition to at least 20 police vans lining up all down the road. A number of us turned to the left still in the field and attempted to get to BAA headquarters through the bushes at the south of the field. At this stage it turned a bit ugly and a handful of people were beaten by the police with their batons and turned back. I spoke to one man who was in pain from receiving a blow across his forearm.

We carried on through the southern half of the field and people continuously made attempts to cross police lines, some of which were successful and some resulted in more fighting. We reached a fence and someone attempted to climb it, as he was repulsed by the police there was a feeling in the crowd that if we all rushed together then we would get through. However, with the great majority of the protesters being peaceful and non-confrontational, this didn't occur and we carried on through the field and reached a small park next to a housing estate where again there were attempts to get through and some agressive tactics by the police to stop us.

At this stage they managed to circle us and it became obvious we would be kettled. A small group of locals were in the park with their dogs and were obviously watching the confrontation. The riot police shouted at them to move back and when they did not do so, one of the policeman grabbed one of the dog's lead and suspended the animal in the air as if to hang it. He soon let it go to shouts of 'shame' from the crowd and the locals retreated from the scene. By this time we were surrounded by about 100 riot police who had completely encircled us.

The protesters mainly sat down and talked within their groups about tactics and what they might expect next. We were kept there for around 45 minutes, and were entertained by the samba percussionists amongst us. Eventually, the police told us they were going to escort us back to the camp to head of any chance of a 'public order' offence. We were herded back across the fields by the 100 or so riot police who now seemed to be in a good mood, no doubt looking forward to a cup of tea before their next encounter.