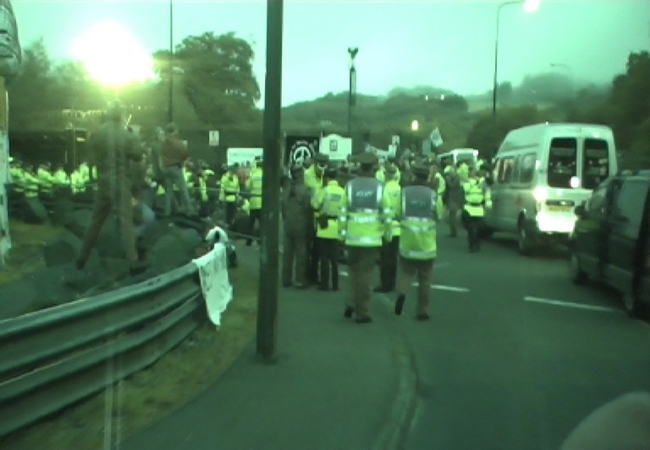 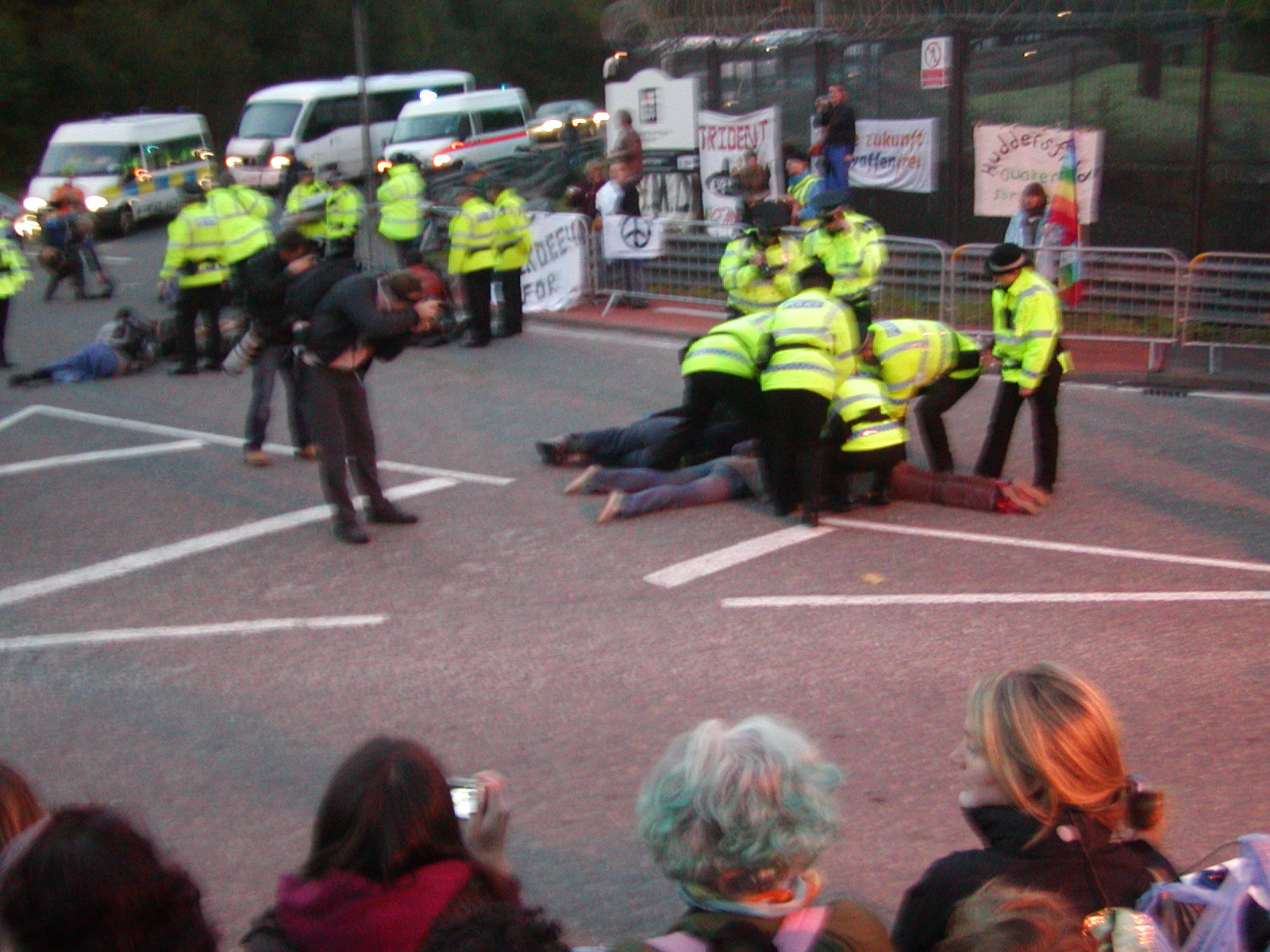 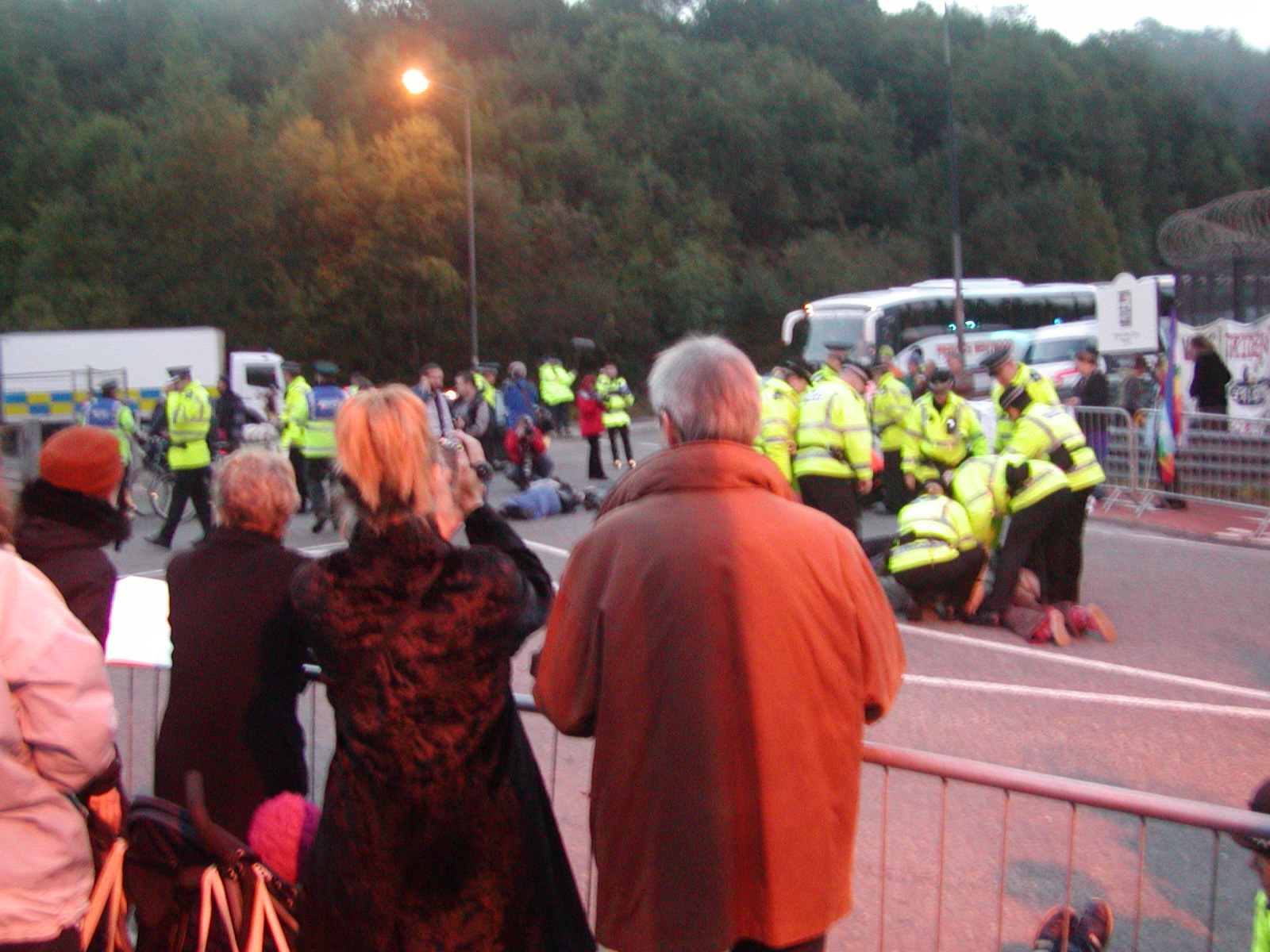 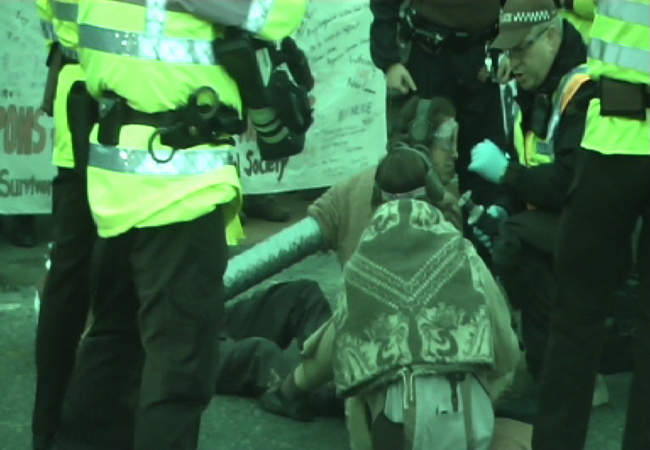 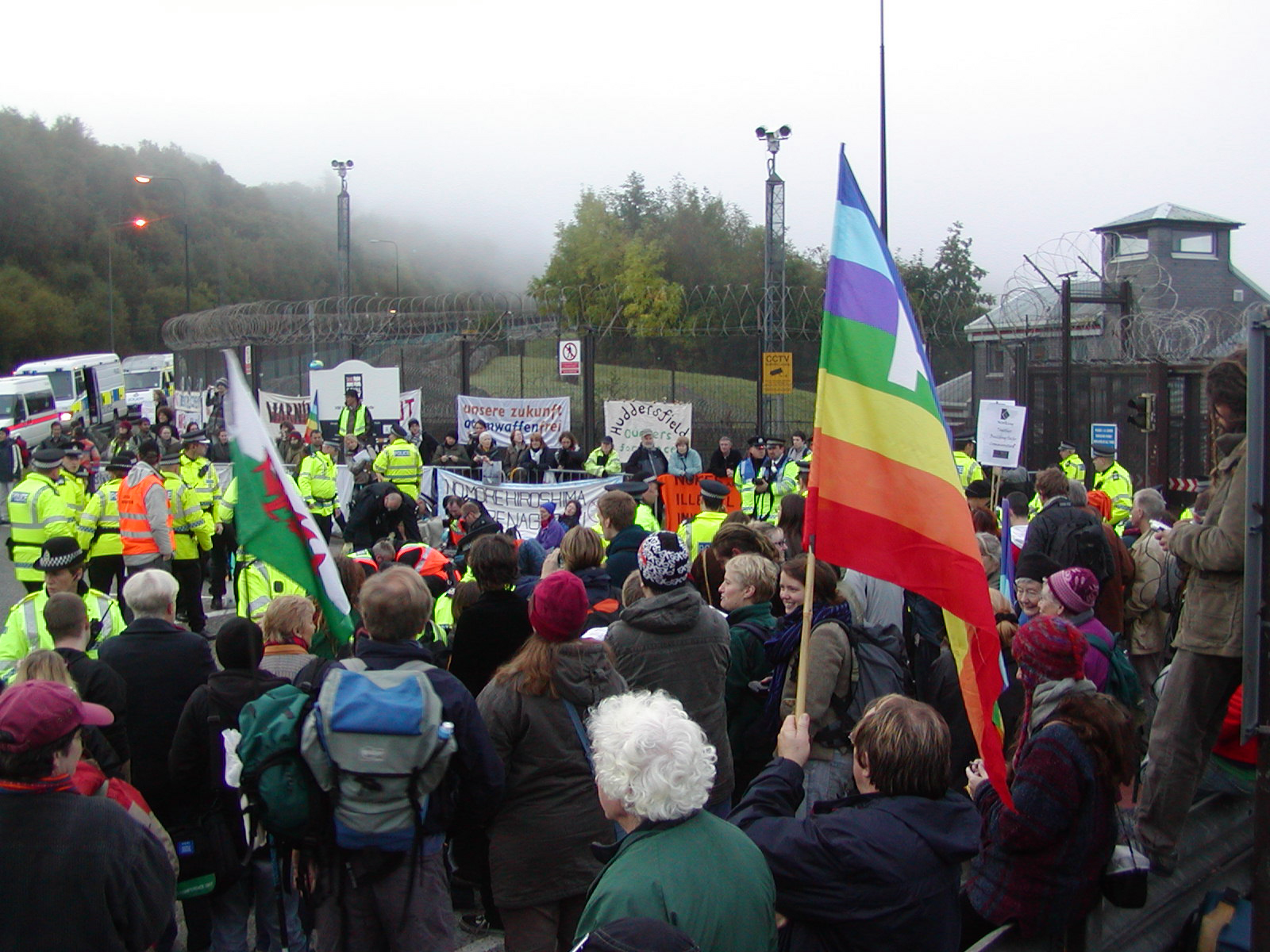 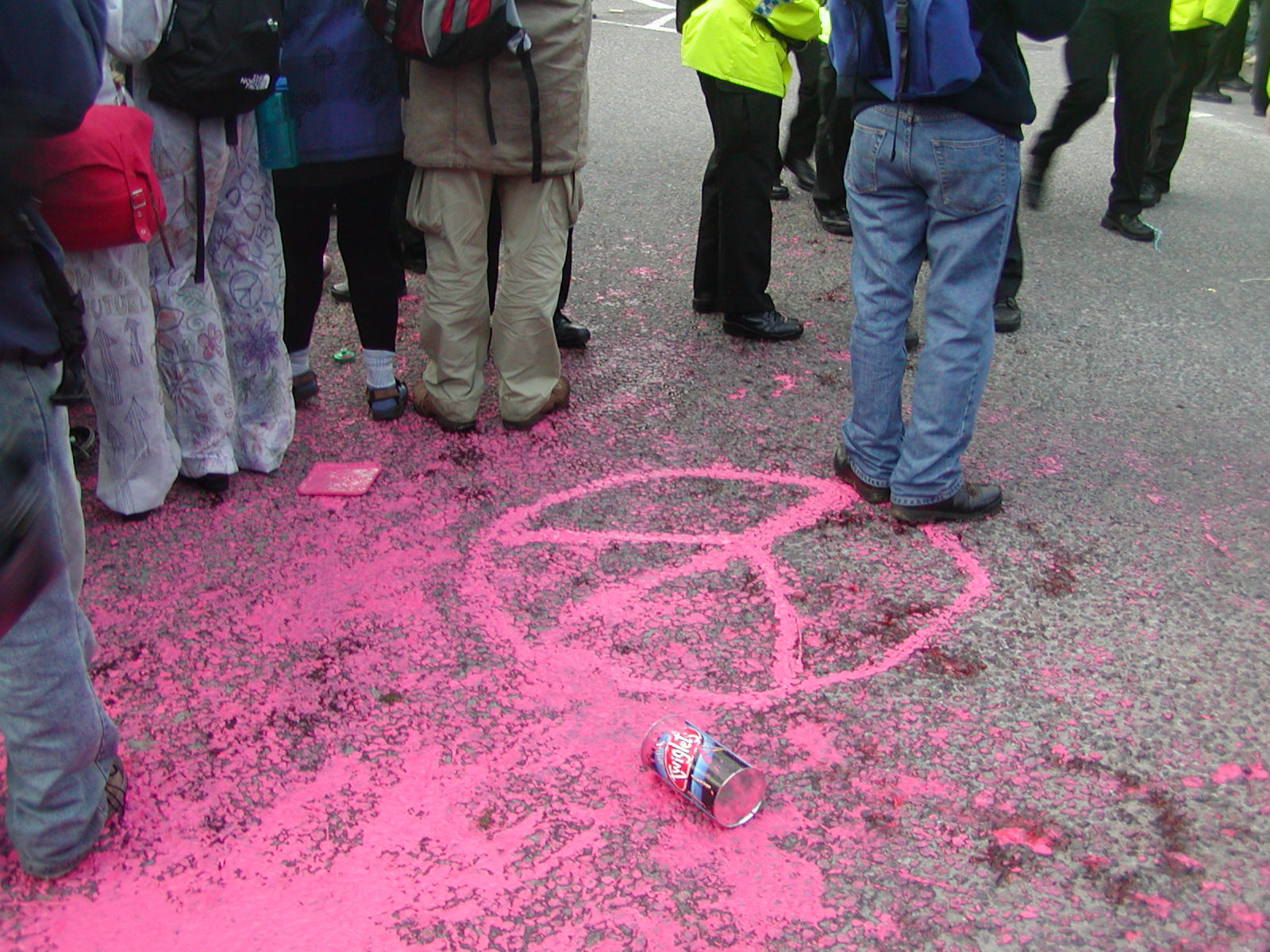 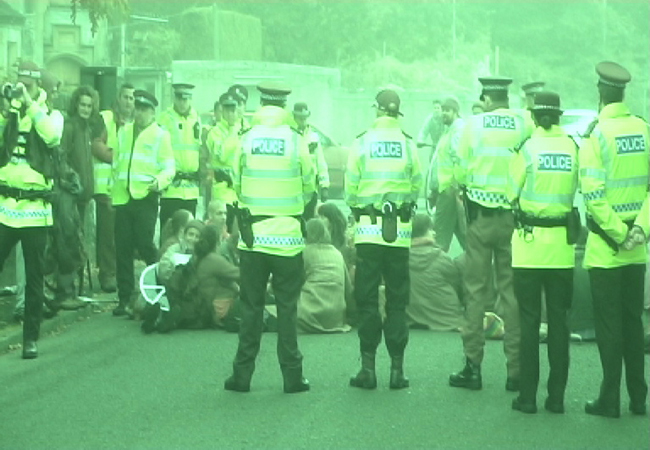 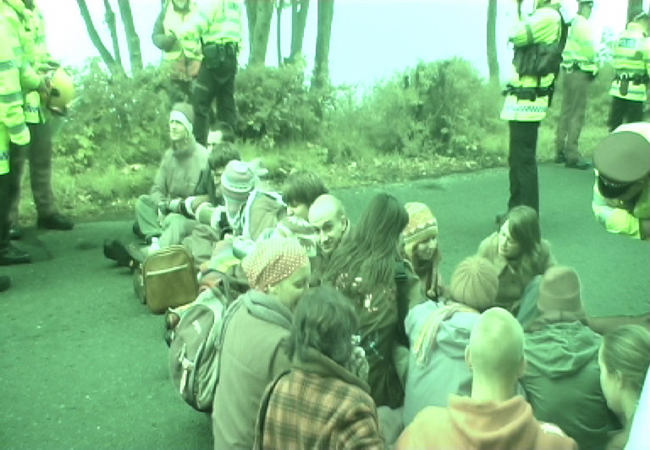 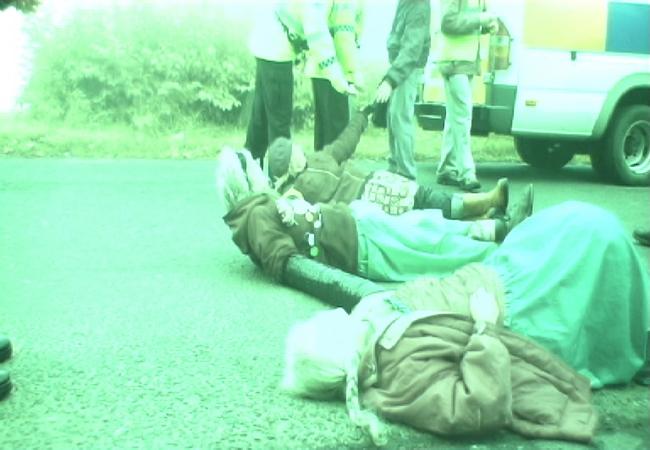 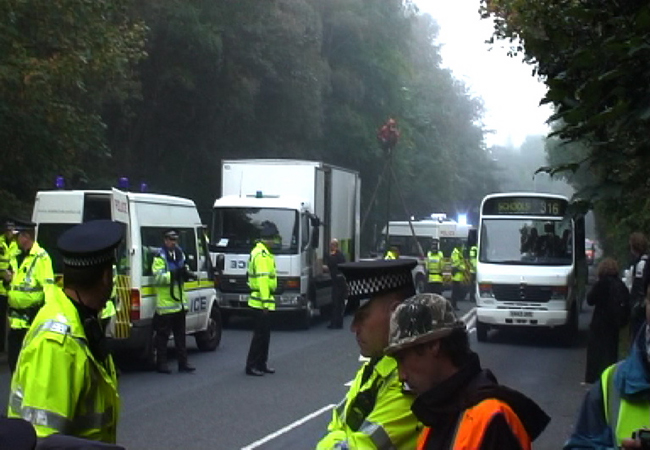 ...and in frot of the peace camp 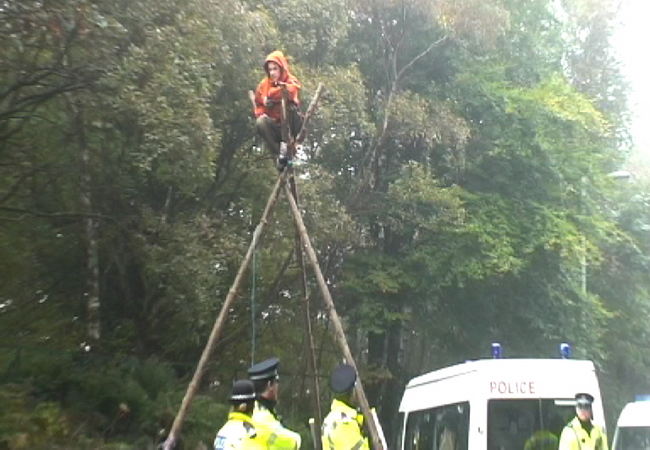 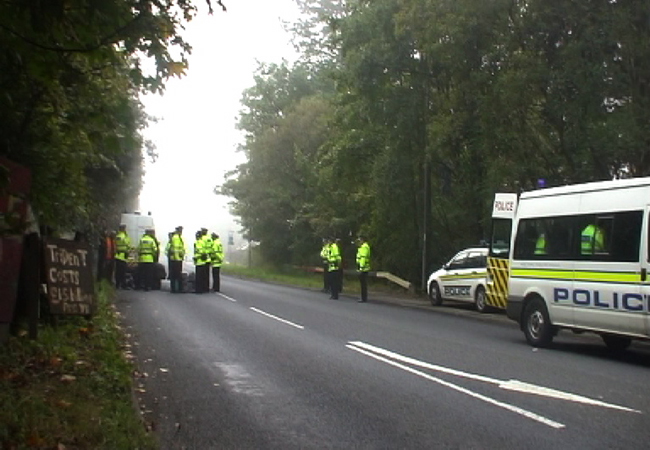 another group locked on 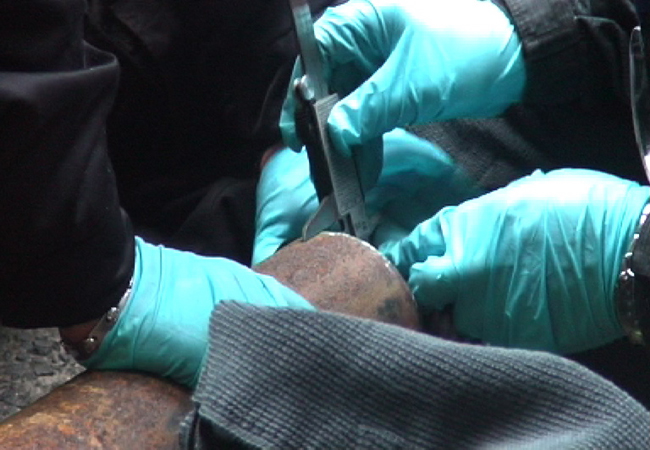 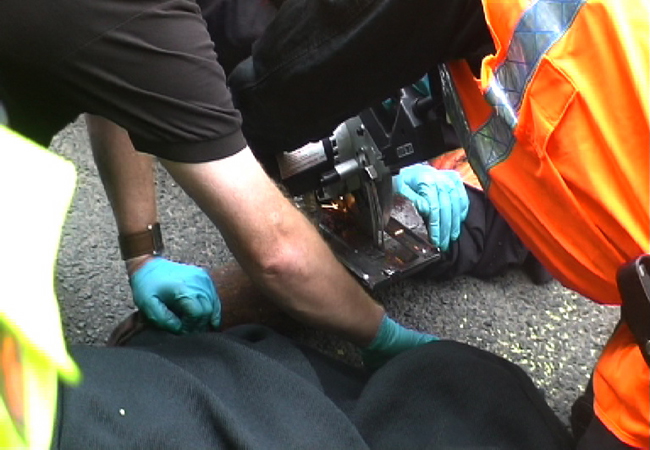 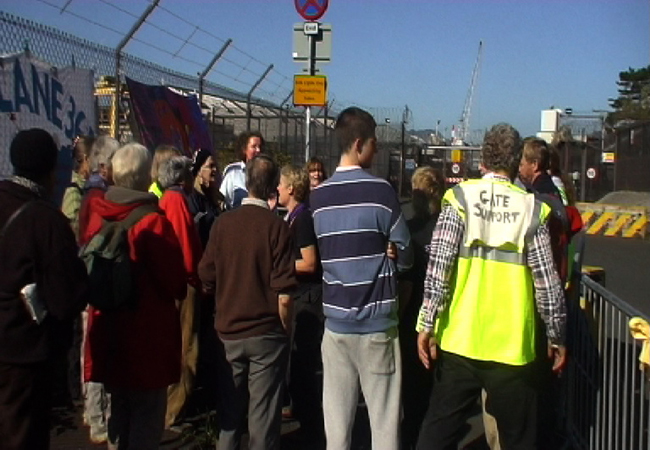 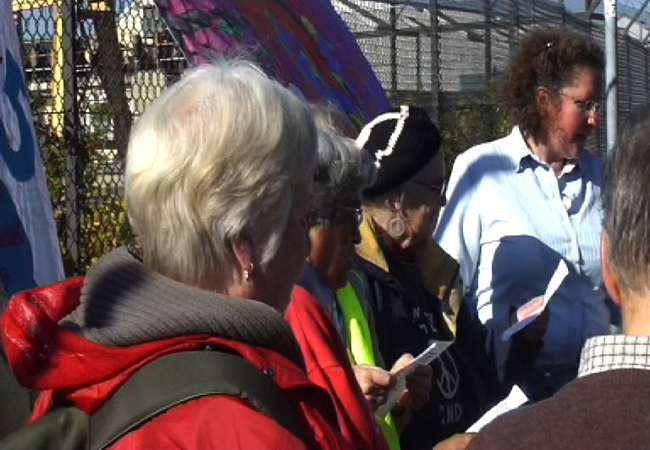 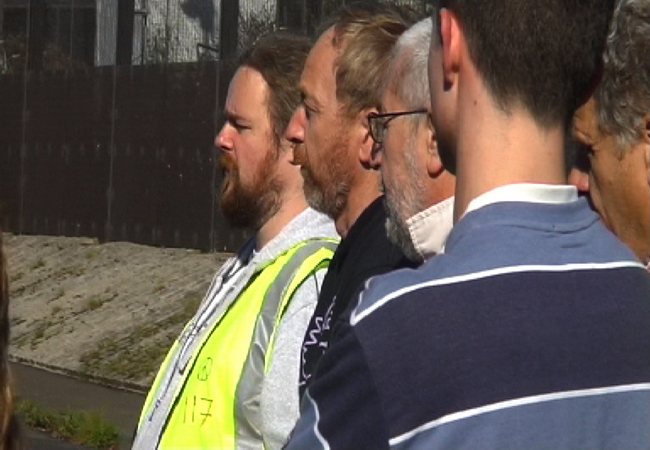 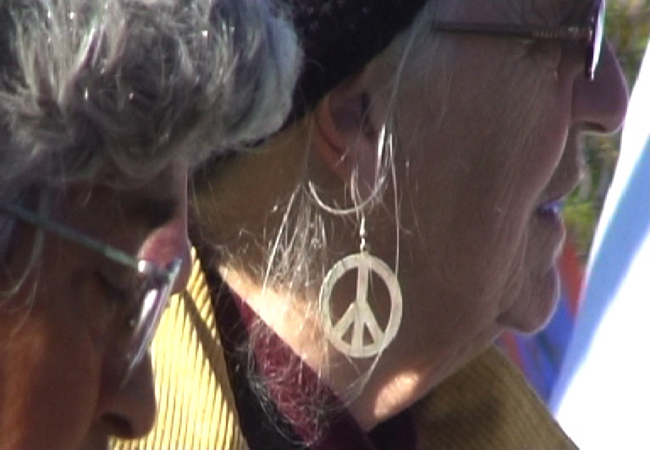 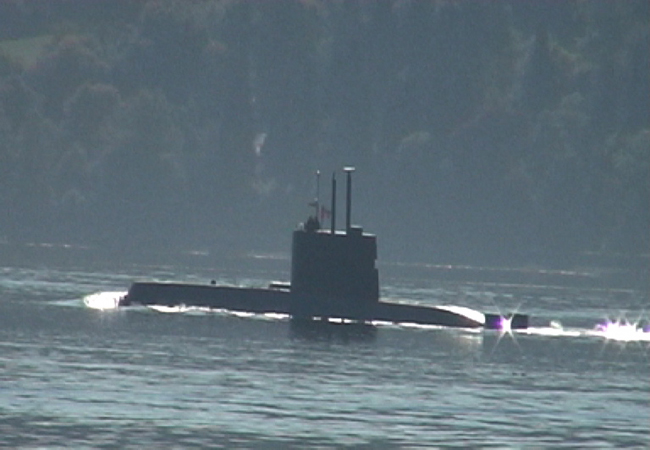 
The day began very very very early at the peace camp. fueled by coffee we mounted on the pedals sound system tandem and headed into the mist. We found ourselves on the road to the north gate, overtaken by 5 or 7 coaches. We arrived as people flooded off the coaches, and swamped the north gate.

Various groups locked on straight away, and succeeded in closing the gate. After a final warning for riding around the roundabout we decided to move towards the south gate in the knowledge that the north gate was under control.

On arrival we were surprised how few protesters were there, and no lock ons where in place. Two brave woman, similarly dismayed decided to throw themselves into the road, but their arses barely touched the floor.

We headed off for reinforcement (coffee), slightly disappointed, when our spirits were lifted by a surprise lock on up the road, of around 15 people, followed by a smaller one of 3 seasoned women strugglers. Also two more women sneakily locked in front of a police van.
We serenaded them with music for 2 hours happily trapped behind their line.

Finally able to move towards the peace camp for a coffee, we presume to deserve, we stumbled into the tripod placed on the main road just in front of the camp. Another two groups of people were locking on in other part f the main road. (no) god bless the Finnish!!!!
Even this fantastic block didn't fully stop the traffic but caused chaos for hours.......

In the afternoon at 1 p.m. we were needed back at the north gate to provide amplification for a mish mash of performances including Leon Rosselson, Seize the Day and the very sensitive orator of Faslane vagina monologues.
This aroused the crowd and lifted people's spirits culminating in spontaneous dancing and merry making whilst numerous "GOAT" ( golden oldies against trident) were carried away by police.
A grand finale ensued for a mass circling of the gate and a gallant attempt by members of Seize the Day of a final lock on.....but they were seized by the pigs in a shackle shuffle......

We left to create a presence at the south gate at 4.30 for the shift change with an "all the arms we need" banner to confront the workers with an image and memory of a caring not killing future for our children. And we were asked by the police how to get hold of the Seize the Day CD. On that note "the bullshit ends now", Boom Boom.

Life in the Faslane, all in a days work for the pedals sound system always with you in action
for more info..... see www.bicycology.org.uk