“We never forget who we’re murdering and spying for”. Cornerstone of the UK military-industrial complex / Orwellian state, US-based firm Lockheed Martin were targeted on Thursday lunchtime at their central London HQ by activists from Trident Ploughshares. 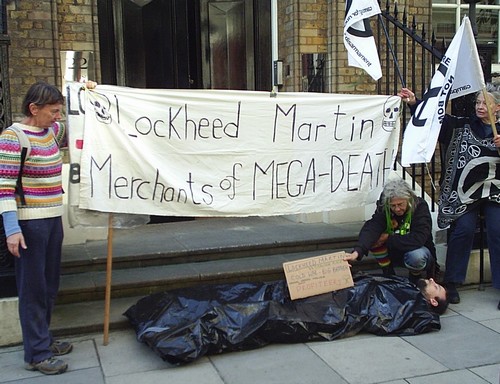 Five activists from a Trident Ploughshares affinity group, the Muriel Lesters leafleted, engaged the public (and police) and displayed banners and placards on busy Vauxhall Bridge Road, near Victoria Station to highlight the precise location of the UK corporate headquarters of nuclear weapons manufacturers, data-mining specialists and all-round baddies Lockheed Martin, hidden away in an anonymous building in a nearby side street.


Their substantial wad of leaflets exhausted by a public horrified to learn of the nefarious corporate activities being conducted in their neighbourhood, and the arms giant’s bid to run the UK census (where’s Hannibal Lecter when you need him?), the group proceeded to the company’s offices at Manning House (22 Carlisle Place, London. SW1P 1JA). There, at the foot of the steps, they dumped a “corpse” zipped up in a bodybag (one of the activists, not quite dead), accompanied by a sign with an arrow indicating the exact whereabouts of the “bomb makers”, and unfurled a large banner reading “Lockheed Martin – Merchants of MEGA-DEATH” (not a heavy metal band). The “cadaver” itself carried a small placard reading “Lockheed Martin, 22 Carlisle Place – Cold War - Big Brother profiteers”. The protesters have vowed to revisit their “nemesis” in the not-too-distant future.


1. Lockheed Martin, Serco and British Nuclear Fuels Plc (BNFL) are equal shareholders in AWE Management Ltd, which the UK Ministry of Defence has awarded a multi-billion pound contract to manage and operate the Atomic Weapons Establishment (AWE) sites at Aldermaston and nearby Burghfield, both in Berkshire, until at least 2025. Lockheed Martin and its bedfellows would seem to have no qualms about lining their pockets producing illegal weapons of mass murder and destruction, at the behest of Brown and Browne and the other warmongers in Whitehall.


2. Block the Builders, supported by Trident Ploughshares and CND, have called a major blockade of AWE Aldermaston on MONDAY 12th NOVEMBER, to demand that the MoD immediately suspends the construction of the Orion laser and other new multi-million pound facilities at AWE, and that the UK government launches a full public inquiry into the alarming new developments at AWE. The new facilities are designed to facilitate the production of a new generation of nuclear warheads - a material breach of the nuclear Non-Proliferation Treaty, to which the UK is a signatory - and to circumvent the Comprehensive Test Ban Treaty, to which the UK is also a signatory, ahead of any parliamentary decision on the future of ‘British’ nuclear warheads and missiles.

Further details of the forthcoming blockade are available on the Block the Builders website, which includes reports from previous actions, background, legal info, etc:

“Our vision: As an increasing number of nations of all sizes around the world indicate the desire and capacity to develop nuclear, chemical and biological weapons of mass destruction, it is necessary to expand our field of vision.

“Our aim: To sustain capability to design a warhead to succeed Trident by facilitating production of British nuclear warheads.

“Our priorities: The key elements of the science-based programme we are putting in place to maintain the country’s nuclear stockpile.

“Our future: We can now look forward to a long-term stable future for AWE and for the UK nuclear weapons programme.”

Lockheed Martin also makes - amongst a host of other killing and spying machines, devices and systems - ‘bunker busters’, cluster bombs and depleted uranium munitions, and is said to be the world’s largest arms manufacturer and exporter.

The company’s own corporate websites:


4. Trident Ploughshares is committed to bringing about the disarmament of British nuclear weapons through peaceful non-violent direct action. They call upon the British government to stop deploying its submarine-launched Trident nuclear weapons system with immediate effect, safely decommission every one of its warheads as soon as practicable, reverse its decision to renew / replace its (US-dependent) Trident system, and insist that the UN adopt a global Nuclear Weapons Convention, outlawing all nuclear weapons at the very earliest opportunity.