Demand for freedom of political prisoners in NZ!

15 people demonstrated outside the New Zealand High Commission in London as part of a global day of action in solidarity with political prisoners in New Zealand. Holding banners reading "Activism is not Terrorism" and "Free the Urewera 17" as well as balloons, leaflets and placards they highlighted the situation in New Zealand last month where 300+ Police, in many cases armed, raided houses around the country today making 17 arrests. Search warrants were carried out in Auckland, Whakatane, Ruatoki, Hamilton, Palmerston North, Wellington and Christchurch. The arrestees were all activists in the Tino Rangatiratanga, peace and environmental movements.
The Global Day Of Action in solidarity with those arrested, harassed and questioned on and since October 15th has seen over 2000 people take to the streets across Aotearoa, while overseas, solidarity protests took place in many other parts of the world.
For latest info see: Aotearoa indymedia 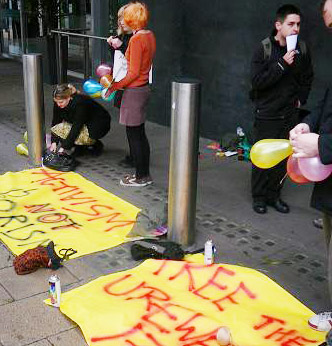 UPDATE: The latest news is that no charges will be laid under the Terrorism Suppression Act after the Solicitor General refused the police application to lay charges. Of the 17 people arrested in the raids, one will be charged with possession of drugs and the others all face charges under the firearms act. All but three are now out on bail. Tuhoe have hired a high profile lawyer and announced plans to sue police for breach of their rights during the raids.

Some background info:
"The important thing to understand about this case is that it represents the continuation of a long history of state oppression of Maori communities. The Tuhoe nation who were targetted in the police surveillance operation and the military style raids have always maintained their independence. They refused to sign the 1840 Treaty of Waitangi which established colonial government in New Zealand and have always maintained their Mana Motuhake, rights to autonomy and self-government. Tuhoe have been punished many times for this independent spirit. The state arbitrarily confiscated swathes of Tuhoe land in the 19th century and state forces have made continual efforts to assert control over Tuhoe territory by force. This October's raids, in which police in full combat gear held the small community of Ruatoki under siege, have reminded many people of the police raid of Maungapohatu in 1916, when Tuhoe leader Rua Kenana was arrested, his son and another supporter killed and his community broken up.
Non-Maori who have supported or visited Tuhoe have also been targetted by the police and many people are worried about the use of terrorism legislation to target political activists. But the real targets of this state oppression were Tuhoe communities like the residents of Ruatoki. The reason is the same as it was in 1916: the state is afraid of people who maintain their autonomy and when it moves against them it uses force."