Women have this morning blockaded the Department for Transport preventing staff from getting to work and carrying out their policies which are catapulting us towards dangerous run-away climate change. This action comes in response to the Transport Secretary Ruth Kelly confirming the government's intentions to build a third runway and a sixth terminal at Heathrow and co-incides with the opening of their first 'consultation' exhibition. 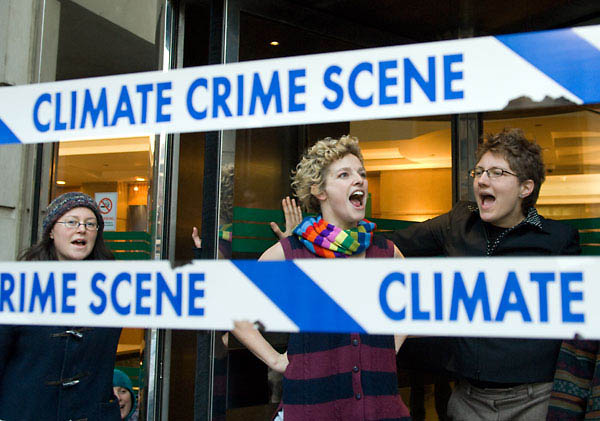 This protest is part of a growing direct action movement against climate change inspired by the Camp for Climate Action (1). On Wednesday over 30 climate activists including the columnist George Monbiot invaded and occupied Britain's biggest ever open-cast coal mine at Ffos-y-fran in South Wales. On 28th November, protesters from climate action group Plane Stupid disrupted the proceedings of the Transport Select Committee who were hearing evidence from BAA boss, Steven Nelson and Aviation Minister, Jim Fitzpatrick in protest at the Heathrow expansion plans. This weekend thousands of people will march on the streets of London to protest about climate change. This protest is a call to all to stand up and take action against the governments and corporations who are fueling climate chaos.

Transport is the fastest growing source of climate change gases in the UK, now accounting for 26% of emissions (2). In a time when we desperately need to reduce emissions, the DfT plans to build more roads and more airports encouraging us to drive and fly more. The DfT was targetted during the Camp for Climate Action in August, and women have returned today to re-emphasise the role of our government in dangerous transport expansion plans. Groups will continue to return to the DfT until the government reviews its policies.

Women have acted today in solidarity with the residents of Sipson, especially the women who continue to campaign to protect their homes, despite bullying and pressure from BAA, and the women all over the world who fight everyday to survive in the face of increasing climate chaos.

NO 3rd runway at Heathrow

Aviation is already the fastest growing source of UK carbon dioxide emissions (3), and these emissions are released high in the atmosphere meaning we feel their effects immediately. Heathrow is already the busiest airport in the world. Building a third runway will lead to even more flights and more pollution. Oxford University recently concluded that it will be impossible to meet the government's own target for a 60 per cent carbon reduction by 2050 without curbing aviation growth (4)

The DfT is building a £5 billion 115 mile long expansion of the M1 with an increase of 186,092 tonnes of CO2 every year (5). Is this taking climate change seriously? We call for a scrapping of the current and proposed schemes up and down the length of the M1.

We call for a reduction in transport, and reject dangerous green wash such as 'biofuels' and carbon offsetting. We cannot continue with relentless growth on a finite planet. We all need to reduce consumption, and our carbon emissions. (6)

Jane Wilson, on the protest says, "The government does not like to admit it , but we cannot sustain our current levels of consumption or the growth economy and stop climate change. Its time to stop tinkering at the edges and wake up to the reality of the threat & take serious and drastic action. We have to create a society that is less dependent on energy, and that is more locally self-sufficient."

1 The Camp for Climate Action 2007 (www.climatecamp.org.uk) was a large protest and educational event at Heathrow this year, highlighting the link between the aviation industry and climate change.

2 The Campaign for Better Transport (www.bettertransport.org.uk)