Transforming the threatened villages near Heathrow Airport into a giant eco-village could help save them from being demolished for the planned third runway according to environmental campaigners.

Proposals for a variety of different groups to move into the area and help the local residents develop eco-friendly projects have been circulated by the Earth Aid Environmental Campaign. 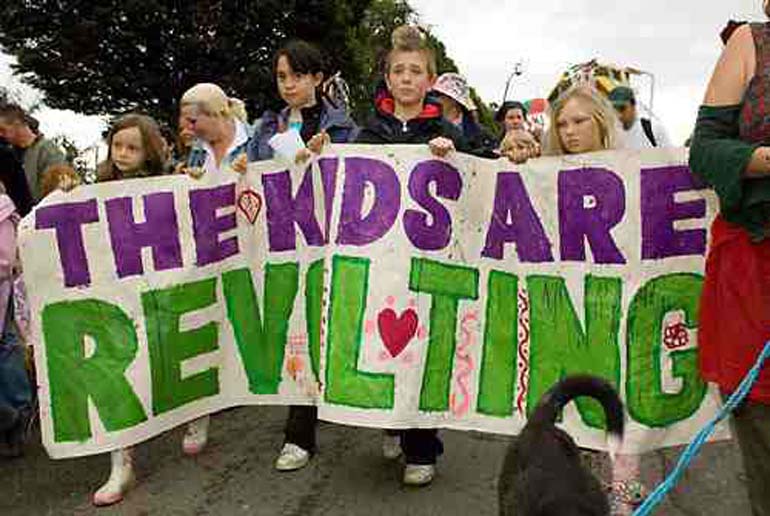 It is being suggested that a number of environmental groups and organizations could establish permanent bases in the villages and work with the local people to help them fight back against global warming and climate change.
A futuristic high tech eco-village designed to function as a model for grassroots action by local people in their own local areas all over the world could attract international media attention and help solve the global environmental crisis.

Other ideas being proposed include turning the villages into a giant movie set and making a reality TV show entitled “Can You Save the Human Race?” which would be acted out and filmed by local people and possibly broadcast free of charge on Indymedia or a mobile phone network.
The basic story would be about how the local residents declare their independence from the British government and rename the whole area “Extinction!” to symbolise the imminent destruction of the villages and the threat of human extinction that many scientists have been warning about as the Earth's temperatures continue to rise alarmingly.

The declaration of independence would be in the style of the satirical comedy film “Passport to Pimlico” but would actually be a genuine attempt to change the entire political and economic system in Britain with the help and support of the best environmental and human rights lawyers available.
The local people could legally form a Revolutionary Council to take control of their own local affairs and encourage other local areas to also resist and fight back in self defence against corrupt corporations and governments.

As part of an ongoing programme of events in the Heathrow villages it is also being suggested that there should be a community centre for local people to meet environmentalists and discuss ideas and plans and to share unwanted second hand goods in a Consumer Revolt against the huge polluting corporate shops and chain stores.
The world's first Earth Fair in Sipson Harmondsworth and Harlington could set an example which could be emulated in every small town and village all over the Earth and help to save the human race from extinction.

It is also being proposed that the next Children's Revolution events should be organised by local campaigners who might be keen to show that not all teenagers in Britain are antisocial.
Local teenagers who joined the kids' bloc Children's Revolution march at the Camp for Climate Action near Heathrow in August 2007 and chanted
“No Third Runway” at the police said they wanted to help keep the climate camp going as a kids' site.
Although this idea was not supported by the climate camp at the time, it is now being suggested that the parents could help their children to set up a protest camp near their homes and speak to the world's news media about their own concerns for the survival of future generations.

It is also being proposed that there should be a Children's Revolution free festival in the summer on the site of the planned third runway organised by the local people themselves.
After the climate camp the crew of the bicycle powered sound system Rinky Dink expressed an interest in returning to Sipson and getting involved in a new event at a later date to help to peacefully promote the interests of the Children of the World, particularly because they felt that violent protests and children's activities were incompatible.

Apparently two local councillors offered the use of part of a local school for a permanent educational climate project after the Camp for Climate Action but none of the participants they spoke with appeared to be interested.
However this does seem like a perfect opportunity for a group like Greenpeace to move in and help create an eco-village in the area and bring their Rainbow Warrior ship that they use at Glastonbury every year for the green kids to experience the adventure of eco activism for themselves.

At the national meeting of the Camp for Climate Action in Leeds recently a proposal for holding a permanent camp at Heathrow was rejected, and it was said in the minutes that the people making the proposal were not at the meeting.
However this does not mean that genuine full time environmental campaigners have given up on their support for the local campaign against the third runway.
If anything we are urgently stepping up our efforts to try to stop the destruction of the three small historic English villages and the surrounding countryside, and we are hoping that the local people will offer us a site and welcome us into their community.

Our own work involves rescuing and repairing campaigners' vehicles and recycling and reusing abandoned waste and doing electrical and electronic work and designing renewable energy devices, amongst other things of a similar nature.
We are looking for a site to use as a workshop and a base of operations and also other sites for the Earth Fair Consumer Revolt community centre and for other environmental groups to do their own work.
Environmental experts including scientists will be invited to participate and as far as we are concerned everyone without exception who wants to join in will be welcome to get involved with this project.

There will be no discrimination against anyone for any reason, and police and journalists especially are invited to come and see us or contact us so they can properly do the jobs they are employed to do.
To the world news media I would like to say please accept this as a personal apology for the way that some of you were treated at the Camp for Climate Action.
This rudeness and abuse was the behaviour of a minority of ignorant people and was not agreed to by the majority of the decent environmental campaigners at the camp.

Anyone interested in getting involved with this project to lend support to the local campaign against the third runway is welcome to contact me at at any time either by email or by phone.
I am particularly interested in hearing from local residents of the Sipson Harmondsworth and Harlington villages willing to help find a site for us to use as a base for our work.
We are ready and anxious to move in immediately because we believe the need for serious action to save humanity from the catastrophic effects of global warming is becoming increasingly urgent.

Climate change is an tragic emergency for humanity and it should not continue to be seen as a trendy bandwagon for opportunistic capitalist entrepreneurs to jump on board and make money at the public's expense.
We are looking for genuine solutions to global warming that ordinary people can implement themselves without continuing to be ripped off by the big corporations and the governments that are killing us all.
The Heathrow campaign may well be our last chance to save the human race from extinction.
Thank you.
Nick. Mobiles: 07964226736 (Orange) 07846816797 (Three).