The period leading up to Valentine’s day saw actions against Israeli apartheid taking place in the USA, England and Belgium. A week of action had been called against the import of Israeli flowers for Valentine’s Day. The call to action was against Carmel-Agrexco, the 50% state owned Israeli export company, and in support of a boycott of apartheid Israel.

On Friday 9th February Belgian activists blocked trucks at Agrexco’s depot in Liege, On Monday in Hayes, Middlesex, Activists blocked the entrances and exits of Agrexco’s UK headquarters. Some activists opted for another Valentine’s day target, the Israeli diamond trade: In London Architects and Planners for Justice in Palestine and Jews for Boycotting Israeli Goods picketed Lev Leviev’s new store while activists from Adalah in the US targeted Levievs’ New York branch. Leviev, an international diamond merchant, is responsible for developing illegal settlements on Palestinian land near the West Bank Villages of Bil In and Jayouss. His New York store has been targeted for several months by anti-apartheid activists.

Links: More info on the campaign against Leviev so far 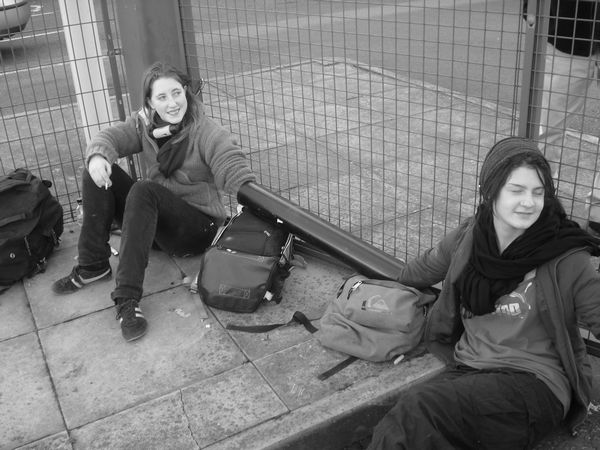 The call to action was following a call by Palestinian Civil Society organisations for Boycott. Divestment and Sanctions (BDS) against apartheid Israel.

Carmel-Agrexco is the largest exporter of fresh produce from illegal settlements in the West Bank. Palestinian workers work for low wages on land which has often been expropriated from their own families (See video of Carmel Agrexco workers in the Jordan Valley). Children as young as nine are employed on settlement plantations supplying produce to be sold by Agrexco. Agrexco export 60% of their produce to European markets. The company boast that it can get goods to European markets in under 24 hours while Palestinian goods rot in the fields because the Israeli occupation denies them access even to local markets.

This follows from actions of 11th November 2004, when Palestine Solidarity protesters from London and Brighton were arrested after taking part in non-violent blockades outside the same company and 30 August 2006, When demonstrators blockaded the company for 11 hours.

In September 2005 a Judge ruled that Agrexco (UK) must prove that their business is lawful after defendants argued that Agrexco were ncillary to war crimes under the International Criminal Court Act 2001. The acquittal of the seven activists before they were able to present their defence meant that the court did not have to rule on the legality of Agrexco-Carmel’s involvement in the supply of produce from illegal settlements in the occupied territories.

In September 2006 protesters blockaded the company again, Carmel refused to have demonstrators arrested because this would have lead to another embarrassing court appearance where their business methods would have been investigated by a British court of law. Since then no prosecutions have taken place of protesters at the premises despite repeated acts of direct action.

On Monday 11th one man was arrested for criminal damage. However, it seems unlkely that Agrexco will want to cooperate with a prosecution.

Lev Leviev, a prominent developer of settlements in the West Bank and global retailer of diamonds, has been targeted for several months by activists in New York. The campaign is in line with the call for a boycott of apartheid Israel and in solidarity with the struggle of the villagers of Bil In and Jayouss. Both villages have been the scene of popular grassroots struggles against the Israeli apartheid wall. In both Bil In and Jayouss the wall separates villagers from their farmland and leaves vast swathes of land in danger of annexation by illegal settlements developed by Leviev.

The actions in London and New York were part of a growing internationl campaign against Leviev.

Read: Text of letter to Carmel-Agrexco | Report on Carmel's involvement in the Jordan Valley | War on Want's report: Profiting from the Occupation| Corporate press coverage of the campaign against Leviev

This is great news

Not only the sucessful direct actions but the fact that activists across the globe are uniting together for not just a common goal - but a common target.....apart from the animal rights movement, it's not often enough for other campaigns to work globally.

Keep it up - this is the only way forward within globalised capitalism.