At their last tour event in Cambridge The Student Climate Project held a planning gathering where they pieced together plans for their next event in April. As ever, the plans are very open and it is hoped many will find ways to contribute to our work, who share our aims of inspiring students with the radical climate message. 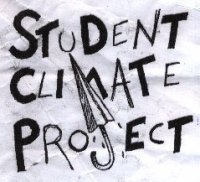 Having successfully completed their first tour event in Cambridge, the Student Climate Project has put together big plans for the next event in London. The event is being held all around London from the 18th to 20th of April, and is set to step up their campaign to inspire the wider body of students into taking radical action against climate change. The Student Climate Project is a non-hierarchical network and everyone is encouraged to contribute to the next event to make it as great as possible.

In Cambridge the Student Climate Project held their first Day of Active Outreach in Market Square, where they dropped a bright green banner from the top of the tallest tower. Meanwhile, a flash mob, street theatre, and the giving out of vegan cakes took place on the ground.

“It was really inspiring to find so many passing students being so open to what we were attempting to express”, said one activist participating in the event.

The three day series of events concluded with planning for the future, and many exciting decisions were made. A further day of active outreach will take place on Roehampton Campus on the 18th of April, and will include more vegan cakes and street theatre. In addition the day will include an exciting arts space and the Climate Camp exhibition.

The 19th will see the launch of our new national project, called ‘Carbon Copy’, where the aim is quite simply to redecorate the UK with a mass of climate related wall art, posters, subvertising, and more. The project’s output will be pooled together on our website, and the ‘copying’ of produced motifs will be a central theme of the project.

“Climate Change requires us to look at the world in a radically different way, in order to genuinely connect with the immensity of the issue. Therefore, I reckon a radical redecoration of our urban landscape climate style should do just that,” said a campaigner involved setting up the new project.

The final part of the London event, on the 20th of April, aims to promote collective direct action as a crucial means to tackling climate change. The event will see a mass refusal to pay the extortionate rates of train travel, and instead people will board the train for free producing coupons on demand asserting their right to free public transport. The action aims to point out the hypocrisy of the government encouraging the public to make changes to our personal life to lower our carbon footprint, when the sustainable options remain out of reach due to an unsustainable infrastructure.

“I think the action is brilliant”, says one enthusiastic participant, “because it is not only a very accessible form of direct action that requires no previous experience or skills other than the ability to board a train, but in addition it highlights an incredibly relevant issue to students.

“Students are often faced with the crucial decision as to whether to own a car or not. It is understandable that so many opt to become car drivers given the extent to which our economic system and infrastructure favours car drivers over public transport users. So rather than making car drivers feel guilty about this reality, our action aims to instead focus on bringing about the positive changes desperately needed”.

All are encouraged, whether students or not, to become involved in any aspect of our projects. The Student Climate Project came out talks held at the Camp for Climate Action, and has a strong affinity with the camp.