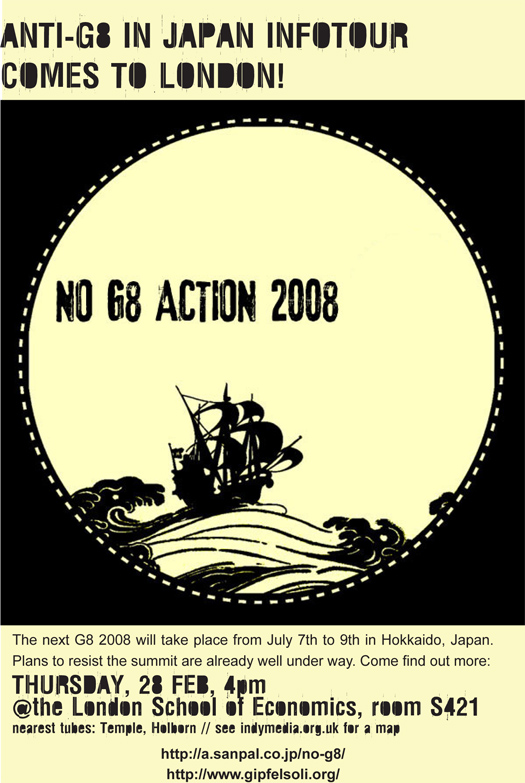 The Japanese G8 Infotour is coming to the UK (read all about it in the IMC-UK feature:

The London event is happening on Thursday, 28th of February, 4pm at room S421 of the St Clements building, London School of Economics.

How to get to LSE:

In July 2008, heads of the states that monopolize two thirds of the earth's wealth
will gather at Lake Toya in Hokkaido Japan. The so-called G8 is the embodiment of
the global governance that has consistently driven neo-liberal reforms at the same
time as spreading poverty, violence, hatred, segregation, and environmental
destruction across the globe. We can no longer let it continue.

The Japan based network of anti-authoritarians and anarchists, No! G8 Action was formed in May 2007, right before the G8 '07 in Rostock, where we learned from the European anti-G8 protest. We began to prepare our own projects, hoping to bring Japanese and East Asian impetus into the stage of the global anti-capitalist struggle.
This info-tour is part of that effort. In collaboration with German Dissent! info-tour group the Japanese members have visited countries in the Asia-Pacific region including South Korea, Taiwan, Hong Kong, the Philippines, and Australia. Now we will visit major European cities and cities in US and Canada.

Our presentation will deal with the big issues in Japan and East Asia; militarization, neoliberal reforms, free trade, society of control, environment, minorities and linking to
struggling people of the world. Our presentation will include films, images and talks covering:

-Problems with the G8: why it increasingly uses environmental slogans, Japan's status in global governance, history of Japanese imperialism and its persistent ambition to control Asia by spreading neo-liberal policies and trade agreements. (Inc. films from past G8 protests)

-No! G8 Action: and its coalition building, which connects various types of radical groups, plus screening of recent Japanese street actions.

-Events aside from the protests: political and intellectual conferences as well as cultural
events such as film festivals and music concerts.

-Info: on facilities and gatherings in Tokyo, Osaka,Sapporo, Lake Toya and police behaviour and immigration.

THIS TOUR IS PART THE CALL FOR ACTION, FROM NO! G8 ACTION ,
TO INVITE YOU TO LAKE TOYA AND INTERNATIONAL SOLIDARITY ACTION