The legality of Britain’s Trident nuclear weapons was challenged in court last Friday in the trial of a peace activist from London.

PEACE campaigner Daniel Viesnik, 33, from north London questioned the legality of Trident nuclear weapons before Newbury Magistrates’ Court on Friday 7 March as he faced trial on the minor charge of obstructing the highway. The alleged offence involved a peaceful sit-down protest that took place on 27 July 2007 at the Atomic Weapons Establishment (AWE) at Aldermaston [1] in Berkshire, in the southeast of England, where Britain’s nuclear warheads are manufactured. According to Mr Viesnik, the protest was a statement of his passionate opposition to nuclear weapons in general and to the British Government’s plans to replace or renew Trident. 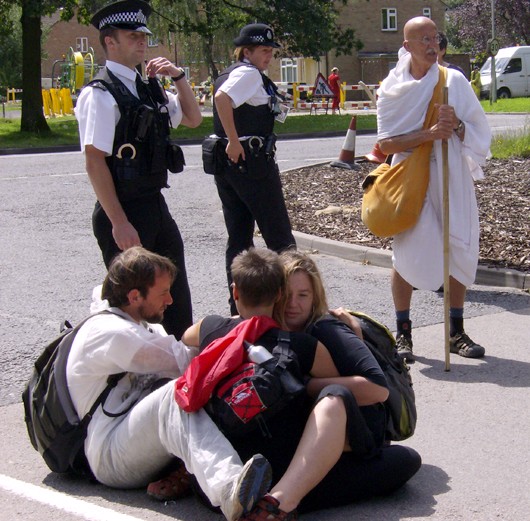 The action [2] took place in the context of a 900-mile, 86-day peace walk from Dublin to London (via Northern Ireland and Scotland), which was organised by the international group Footprints for Peace [3]. The purpose of the walk was to raise awareness of the issues surrounding nuclear and ‘depleted’ uranium (DU) weapons and nuclear power, and to campaign for a nuclear-free future for the UK and the world. Mr Viesnik was one of only four people to complete the walk from start to finish – the only British person to do so.

The defendant explained to the court how he had sat down in the access road in front of one of the gates to the nuclear bomb factory, along with three fellow walkers from the United States: two sisters in their twenties, Liana and Aleta Johannaber from Georgia; and Bernie Meyer, an elderly gentleman from Olympia, Washington who walked many hundreds of miles from the Faslane Trident submarine base in Scotland all the way to London dressed as and adopting the persona of Gandhi.

Mr Viesnik and his (publicly-funded) barrister, Felicity Williams from Doughty Street Chambers, explained that the action was, he believed, entirely justified because he was trying to prevent crimes against humanity being committed, in collaboration with the United States, against the people of Iran; and because this form of protest was perfectly reasonable given the fact that the continuous deployment of Trident at sea and the development of new nuclear bomb-making facilities at AWE are contrary to Britain’s obligations under international law. The defendant also pointed out that in the months prior to the invasion of Iraq five years ago, the British Government had twice announced its readiness to launch nuclear strikes in the event of (non-nuclear) attacks against British troops. Such threats, he claimed, contravened international law.

The bench of three lay magistrates, after hearing the various submissions from both sides, retired to consider its verdict. After three-quarters of an hour of deliberations, it finally returned a verdict of 'guilty', but chose not to elaborate upon its decision. Mr Viesnik, who currently receives no income, was fined £50 plus £465 in court costs. Commenting upon his conviction and penalty, he said:

“It is likely I will refuse to pay a single penny on principle, since I firmly believe I am in the right and the British Government is in the wrong. The court is under a duty to uphold the law, which it has blatantly failed to do. No just society would prosecute and convict a citizen who acts according to his conscience to uphold international law. I may have to appeal.”

“I believe Daniel has acted honourably throughout, and instead of facing persecution by the state, his right to peaceful protest should be vigorously defended. The Green Party will continue to speak out against ignorant nuclear expansionism in all its forms.”

Mr Viesnik will soon be rejoining Footprints for Peace for its next three-month international peace walk for a nuclear free-future, this time from London to Geneva through France [4]. The walk sets off from Battersea Park Peace Pagoda, London on Saturday 26 April, the anniversary of the Chernobyl nuclear disaster. Anyone is welcome to join for a day, a week, a month, or even the whole way.

Before that, he will return to Aldermaston for the Campaign for Nuclear Disarmament (CND)’s 50th anniversary event on Easter Monday (24 March) [5], which is hoping to attract some 5000 supporters from all over the UK and beyond, completely surrounding the base. He urges as many people as possible to attend this entirely peaceful and legal demonstration, which has been authorised by police.

5. For more details of CND's 50th anniversary event on Easter Monday and to book transport to Aldermaston, visit:


6. For more on nonviolent resistance to Trident nuclear weapons:

Block the Builders (at AWE Aldermaston): e-mail: btb [at] aldermaston.net


7. More items which may be of interest:

‘So, minister, are we developing new nuclear weapons or not? -
Scientists say they are designing a new warhead design, despite government denials’
by Marie Woolf , ‘The Independent’, 29 October, 2006

Check out this brief video clip: