Revolting London: anarchists against the Mayoral elections, 2 May 2008

We all know politicians are lying, corrupt, self-serving parasites - its time we let them know. This is our London, not their, their party's or their paymasters'. On Friday May 2nd we will confront our class enemies at the Mayoral election results, reviving a great radical London tradition. Its time to take to the streets and claim back our city.
MEET 6pm at City Hall, The Queen's Walk, Tower Bridge, London. Bring noise and anger. 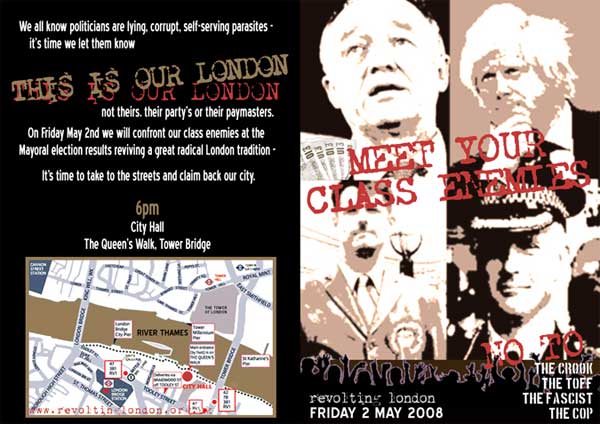 front of the leaflet

the crook, the toff, the cop, the fascist


We all know politicians are lying, corrupt, self-serving parasites - its time we let them know.

This is our London, not their, their party's or their paymasters'.

On Friday May 2nd we will confront our class enemies at the Mayoral election results, reviving a great radical London tradition.

Its time to take to the streets and claim back our city.

6pm
City Hall
The Queen's Walk, Tower Bridge
South side of the river

We're told London is one of the wealthiest cities in the world, playground to the super rich, a global financial centre where city workers, paid in excess of £19bn, keep the institutions of power going.

But London has some of the poorest, most deprived areas in the country (50% of children here are living on or below the poverty line), as we are left to fight amongst ourselves for the most basic jobs and necessities.

As ordinary Londoners we are being priced out of our own city - either exiled to the outer reaches or pushed together in cramped expensive living conditions. Local councils sell off our housing to get-rich-quick developers, breaking up communities and further alienating us from each other as we struggle with increasing debt, fear and security.

The office of Mayor (with its annual budget of over £9 billion) is a massive government institution designed to keep us from making real choices and decisions about our own city. Despite endless public announcements about helping Londoners THE CROOK still puts his full financial backing behind the 2012 Olympics, against local objections, where public money will go to staging a 2 weeks sports show, while private companies reap the rewards; owning the Olympic land, property and sites in the east end that once belonged to us!

All over London THE CROOK is promoting property speculation an private development (selling off public facilities, and open spaces for luxury housing) at the expense of our needs while siphoning off taxpayers' money for his own pet projects and personal cronies. But would THE TOFF, THE COP or THE FASCIST act any differently? Aren't all politicians the same - out to line their own pockets, lying to protect their own interests and influential friends?

When it comes down to it, don't all political parties really represent the interests of the rich and not those of ordinary people?

And isn't it about time we did something about it?

Our so-called political leaders, along with the media, continually deflect our anger from the main enemy onto other working class people - immigrants and unemployed. They use people's genuine concerns to create false divisions and promote their own agendas. Is it any surprise that the BNP leadership, like Cameron and Brown, come from the same privileged backgrounds?

Our class heritage has always been one of defiance and dissent - a refusal to bow down to authority and oppression, be it the fascists during WW2, Thatcher during the Miner's Strike or Murdoch at Wapping - this is our real history, solidarity and self-organisation, and despite the language they use the BNP have always had a vicious anti-working class tradition.

Which is why we should be out in force to stop them taking the platform at City Hall.

The history of London and Londoners is a culture of rebellion and discontent - organising ourselves against the domination of the privileged few - from the Peasant's Revolt to the Battle of Cable Street and the Poll Tax riot.

On May 2nd we will be adding to that tradition - an active resistance against the power the office of Mayor represents and the political parties that reinforce it. We want our city back from THE CROOKS, THE TOFFS, THE FASCISTS and THE COPS.

Its time London joined together making our anger count by getting rid of the lot of them.

Its time to take to the streets and claim back our city.

6pm
City Hall
The Queen's Walk, Tower Bridge
South side of the river