Residents from the Alexandra Court 'temporary' accomodation hostel in Stoke Newington, London, marched with members of the London Coalition Against Poverty to Hackney Town Hall on Saturday 12 April, 2008 to demand the council keep their promises to make temporary accomodation safe to live in. Pictures copyright (C) 2008, Peter Marshall. All rights reserved. 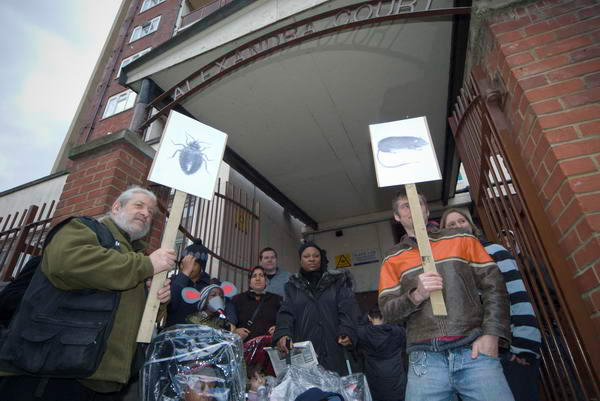 Demonstrators hold placards outside the building 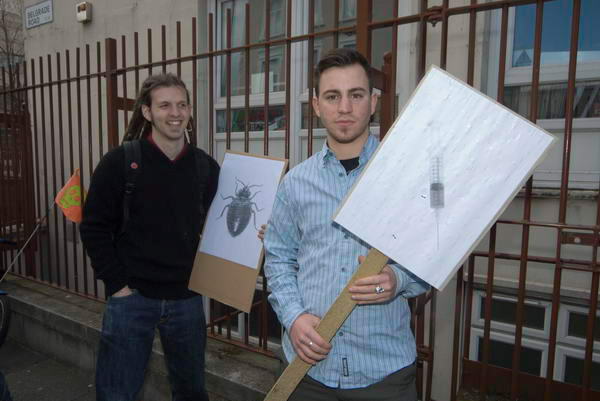 Used syringes are a major health hazard, especially for kids 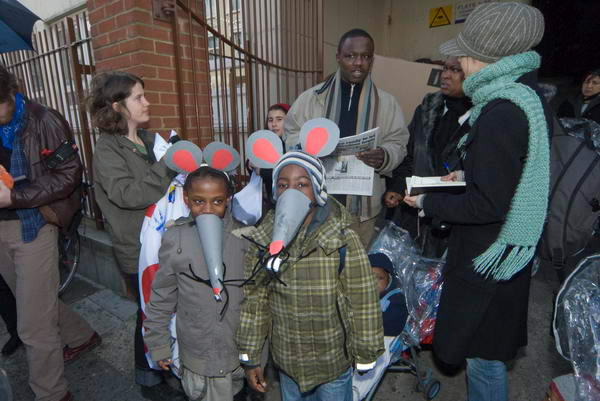 These two mice are fine, but the building is infested 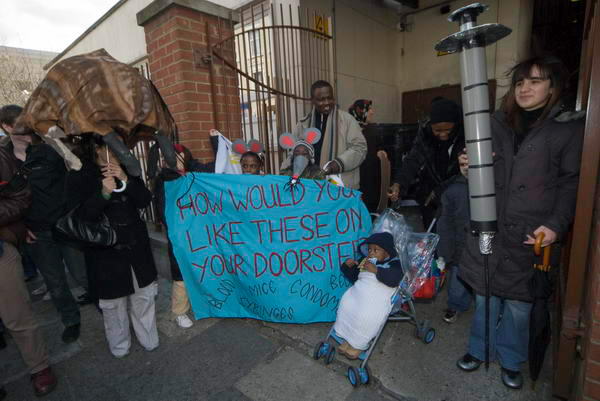 Photocall before the march 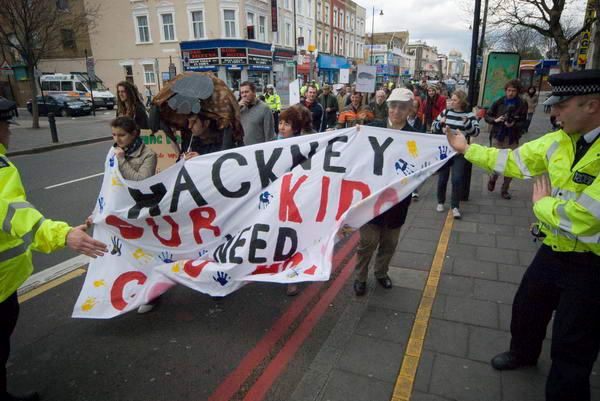 Police direct marchers onto the pavement

When I got biten by bed bugs as a student many years ago, (fortunately they were rather smaller than the umbrella sized version in the demonstration), I moved out of the infested flat in days and found another place, losing a week's rent, but for those rehoused by the council in 'temporary' accomodation that isn't an option. As well as bed bugs, residents at the hostel also complain about mice and rats, and the filthy state of the corridors, often used by addicts and prostitutes, and littered with syringes, used condoms and blood.

The hostel rooms only have flimsy locks, easily forced, and there is no lock at all on the outside gate to keep out intruders. Heating and hot water seldom work and residents are often kept awake for hours by fire alarms ringing through the middle of the night.

Many of those placed in the hostel are mothers with children, whose health and education is suffering from of the lousy conditions. Despite high payments for rooms - up to £350 a week, the management has failed to meet its promises to make improvements, and the council has also failed to take action.

The residents asked for support and the LCAP assisted them in organising Saturday's demonstration, with around 50 people marching from the hostel to Hackney Town Hall where they hoped to meet council representatives.

The march started late, and after a few yards police insisted it go down the pavement as it went down the busy Stoke Newington Road. I had to leave shortly after the start and was unable to go with them to the council offices in Mare St.

http://www.lcap.org.uk/, was started last year and aims to take strategic action around issues related to poverty - such as homelessness, low wages and benefit payments - in London. Inspired by the Toronto based militant anti-poverty Ontario Coalition Against Poverty, it includes members of local activist groups and trade unionists as well as advice workers who work in various organisations including the CAB and law centres.

One of their first direct actions last August, reported in the Hackney Gazette, forced Hackney Council's Homeless Persons Unit to fulfill its statutory duty and find a place to stay for a homeless man who had been sleeping under bushes in Stoke Newington. In another case, a young mother who had left temporary accomodation after violence and harrassment was also housed following their intervention.

As well taking part in direct action, thr group aims to advise and help those directly effected to organise themselves.