Divers from the Marine Conservation Society (MCS) and the British Sub Aqua Club (BSAC) marched on Parliament on April 3rd. Over 100 people dressed in diving kit delivered a 100,000 strong petition calling for Marine Reserves to be included within the currently proposed Marine Act. 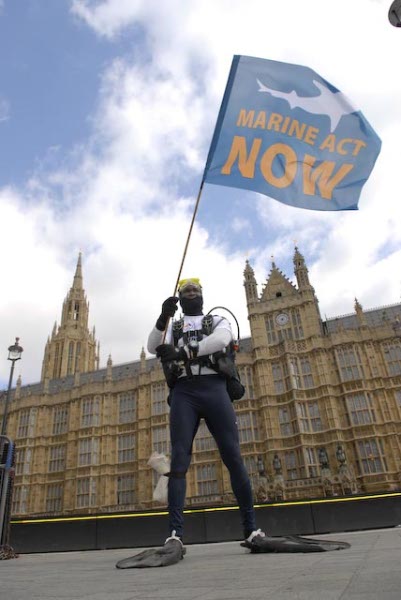 The Marine Conservation Society (MCS) is urgently calling for the UK Marine Bill, published today in draft, to be toughened up with measures and powers to establish a network of highly protected marine reserves where marine life is fully protected from damaging activities. MCS with British Sub-Aqua Club divers marched to the House of Commons to deliver a 100,000 strong petition named 'Marine Reserves Now!' calling on the government to commit to a network of Highly Protected Marine Reserves through the Marine Bill.

The draft Marine Bill heralds a new approach to managing our seas and protecting marine life including measures for marine planning, inshore fisheries reform in English waters, and protection of marine species and habitats. But, MCS, BSAC and other organisations are concerned that the Bill in its current form does not make a strong enough commitment to the establishment of an effective network of Highly Protected Marine Reserves, or provide the necessary powers for the relevant bodies to prohibit damaging activities, rather than just restrict or manage them.

"The piece-meal management of existing so-called 'protected areas' such as Special Areas of Conservation does not adequately protect our valuable marine wildlife. Some of these sites allow practices such as scallop dredging, beam trawling, gillnetting and dredging to damage our marine environment" said Dr Jean-Luc Solandt, MCS Biodiversity Policy Officer. "We fear the proposals set out in the draft Bill will only repeat the errors of the past, with Government allowing short-term commercial interests to compromise much-needed long-term protection and sustainability. That's why we are marching on Westminster today with our 100,000 strong petition. The UK Government must acknowledge that the British public supports the urgent need to implement a comprehensive network of Highly Protected Marine Reserves and let our over-exploited marine ecosystems recover."

http://www.mcsuk.org/newsevents/press_view/213
Photos from the protest: