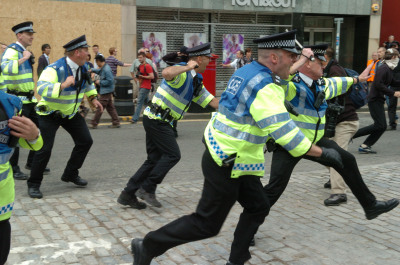 FIT on the rampage - Carnival For Full Enjoyment, Edinburgh, G8 2005.

When writing a call against police tactics for an anti G8 protest, it would be very easy to concentrate on repression. Most G8 protests have, after all, attracted widespread repression.

However, we thought it would be nicer to focus on the last major G8 protests in the UK, and the memory of cameraman Neal Sinclair lying face down in a rose garden.

Join us for similar rosy memories, and be a thorn in the side of the FIT team.
Fitwatch is a tactic to fight the FIT by all means necessary. Anyone can fitwatch, and it can be as confrontational or pacific as you want.