Was told after the demo that this had also been a Freedom to Protest action. Which suited quite well, given the amount of harassment given by police to all present, from the start. It feels like the objective is to discourage people from being politically active by simply giving us an unbearable hard time.
We gathered from 10 to 10.30 am in Brixton Oval as announced, although we decided to wait a bit longer for a few people arriving a bit late ... and glad we did, as more and more bikers joined in as time passed ... admittedly not as many as we would have wished.

Of course a police van was already waiting for us and it felt like as time passed by more and more police gathered to “guard” us, FIT included.

At 10.30am a policeman came to the group out of the group and started harassing one of the bikers. He had entered the pedestrian section of the Oval through a prohibited route half an hour ago, he claimed. As usual, other policemen came to harass the other bikers so as to prevent us from witnessing the intimidation the first cop was exercising - “your bike is blocking the way to passers by” (no passers by to be seen), “just move away, I'm a policeman”, etc.

After empty – and illegal – threats to the first biker, the policemen left us alone although we felt just as harassed by the FIT photo camera continuously pointing at us, making us feel like criminals when we're not.

A few people who were taking the bus to Croydon just a few meters from us were also harassed by FIT. Some of those people took a banner out to prevent the Forward Intelligence Team from taking pictures of people who were simply taking a bus on their way to a protest. They showed their usual arrogance, calling people who had been previously arrested (legally or not, still to be seen) by their names, generally warning people of what “could happen” if they did not “behave”. In the end, at least a van followed the bus until the group got off.

The bike ride left Brixton at about 11am, with one van following us all the way to Croydon. Admittedly the ride felt a lot safer with this uninvited police presence. Unlike other occasions, motorists would not angrily toot at us or abuse us from their cars when our more human speed would delay their speedy journey by one or two seconds, dangerously missing a fatal accident by just a few inches ... this time drivers would patiently wait behind the police van until they could safely and legally over take us.

Once in Croydon we encountered yet again more policemen than demonstrators but in the shopping area the atmosphere was great, specially when the Samba Band took over with their unique music.

After about an hour of very positive interactions with shoppers and passers by, the Samba Band and its followers proceeded to Lunar House, a 20-storey office block at 40 Wellesley Road, headquarters of the UK Border Agency, and Electric House, Croydon's regional reporting centre, where people subject to immigration controls report at given intervals (mostly weekly nowadays). When their applications have been refused, they can be detained for removal when reporting to the centre. People detained elsewhere in the region, including families 'snatched' from their homes in dawn raids, could also be brought to Electric House by the 'snatch squads', which are based at Electric House too.

The police shoved demonstrators at different points in the march. At one point one of the marchers was taking away from the crowd to be threatened with arrest and questioned. When his friends approached him to show him support they were also harassed by other policemen to prevent any witnessing of illegal behaviour by police. It seemed they were considering arresting the one marcher for “breach of the peace”, but when he requested the “breach of the peace” that he was posing to be explained to him, the police was at a loss and could not come with a coherent answer, so he was allowed to walk free and re-join the march because he was showing to be “calm and reasonable”. By coincidence, or not, the man threatened with arrest had been trying to prevent the FIT photographer from taking pictures from peaceful demonstrators so as to guard their right not to be photographed without their consent. FIT considers that people do not have such a right.

Throughout the march, police continued to generally harass, and occasionally shout at people, shove and push them, and conversations like: “more away!” “why do we have to move away” “because I'm telling you, and I'm a policeman!”; or, “why are you pushing/shoving me” “because I'm a policeman!” were heard a worrying number of times.

The demonstration demanded an end to the borders policies dictated and carried out specially by the richest countries in the world (namely the G8, others too...) and freedom to protest without the insane harassment the police, specially “teams” like FIT inflict in rightful protesters.

Call out for this action

This was the call out for this action, which gives a bit of background:

The London Fete against the G8
for freedom of movement, the freedom to protest and equal rights for all !

A Day Out In Croydon!

Londonfete invites for a bikeride/critical mass
to Croydon, Saturday July 5th as part of the International Day of Action
against the G8, starting on Brixton Oval SW2 1JG
(Ritzy Cinema, Brixton Reclaim the Food)

After arriving in Croydon (12ish) we have refreshments and go for
a little tour around Croydon centre to visit the wonderful tourist
attractions of the UK Border Regime.

PS: people can either cycle back together in the afternoon (after protest
ended), or if people like they can take the bike for free on the train from
Croydon East (5min from protest area).

On the 5th of July 2008, people all around the world will protest
against the G8 summit 2008 in Japan. The G8 is a co-ordination for
the interests of Global Capitalism and the wealthy north who benefit
from it.

Globalisation has created huge movements of people to the centres of
capitalism. However whilst capital - money and commodities -
has been granted ever-expanding freedom of movement, the movement of
workers as migrants is subject to increasingly complex and brutal
systems of control.

Militarisation of the borders, raids on communities and work places, the
expansion of migrant prisons and deportation centers, restrictive visa
regimes and the revival of nationalist fears and hate are all being used
to segregate, divide and weaken the working class. Along with building
the border regime, governments restricted the possibilities of assembly,
protest and any form of dissent wherever possible.

In Britain today, the role of managing and policing this system to
benefit the rich is carried out by the UK Border Agency (formerly known
as BIA), an executive agency of the Home Office in the United Kingdom.

Lunar House, a massive twenty-storey office block in Croydon, South
London is the headquarters of the UK Border Agency. Just over the street
there is Electric House, a reporting centre, where hundreds of asylum
seekers visit everyday from miles away to fulfil their reporting
obligations'. They are often arrested on the spot, there are holding
facilities ( short-term prisons) where asylum seekers are being kept
until they get transferred to an immigration removal centre.

London NoBorders is calling for actions against the UK Border Agency.
It is time to join forces, for freedom of movement, the freedom to
protest and equal rights for all !

This was not the largest demo in the world, but compared to many that have taken place in recent years it was spirited and upbeat and unprepared to be simply pushed around by public order coppers and their boot boys in the TSG.

In the Croydon shopping centre the FIT tried to deploy a cameraman, but he was instantly swamped by people holding up banners, placards or whatever came to hand. After just a few minutes he had to be withdrawn as he was completely ineffective, and the FIT were clearly unprepared to start a confrontation in the middle of a busy shopping centre.

Once out of the shopping centre the police became a lot more ‘hands on’. But when the protest was pushed and shoved the protesters pushed and shoved back, and it was really heartening to be part of a protest that was prepared to try and defend itself, rather than be simply penned and controlled. FITwatchers were on the case throughout, despite meeting an aggressive response from the TSG including a few well aimed boots.

Interestingly it seems that there had been a policy decision taken by the police not to make arrests, although there were some stop and searches that were used, annoyingly and unlawfully, to obtain the names and addresses of individuals the police did not know.

I’ve been on many larger demos that have left me feeling demoralised and dispirited, but although this was small it had a determined and upbeat feel to it, and it felt good to be part of something with a bit of attitude.

i agree totally with what was said above. it was a very engaged demo, not like many otheres where people just stood around in a police pen.

just one note: there was one person arrested on the way from the railway station to the demo (apperently under a stupid accusation of wearing a stolen jacket) and released later that day. 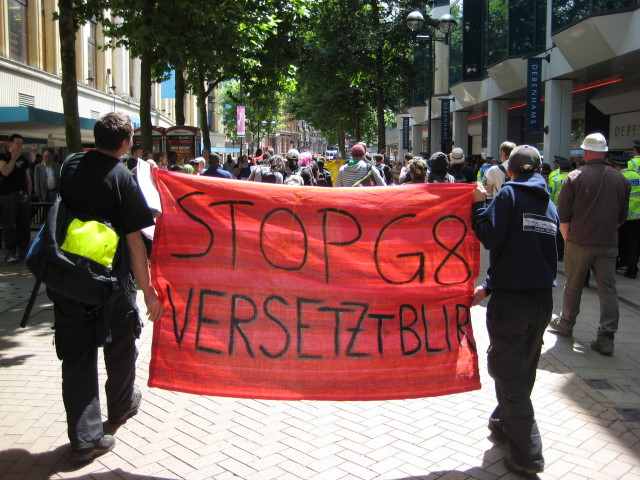 banner in solidarity with Versetzt at Day of Action in Croydon

The international day of action against the G8 in Croydon, London focused on borders and migration control, visiting several facilities of the Home office. But people were also protesting against gentrification and evictions of emancipatory projects, such as the Grevenerstrasse in Muenster, Germany. Besides affordable central housing, the Grevenerstrasse has a comunal housing project and the social centre Versetzt, that offers free meeting space and social events. All the houses are supposed to be destroyed, making space for new fancy housing and a wider street.

Locals and the Versetzt collective have been protesting for over a year. Gentrification might make the streets look better, but usually goes hand in hand with the displacement of the original locals into still shabby suburbs, where rents are still affordable. Free spaces and social centers, that offer space for projects and collectives and social venues that don't depend on the size of ones wallet, are threatened all over Europe.

We need more not less Free Spaces and affordable accommodation.