All systems are go for the E.ON demo next Wednesday, where the Greenwash Guerrillas will greet delegates as they arrive at the E.ON sponsored Climate Change Summit being organised by the Guardian. Join us! 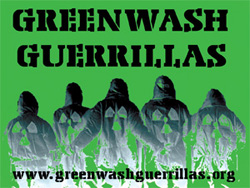 The Guerrillas, equipped with greenwash detectors and kitted out in toxic waste suits, will cordon off the building, which will be oozing dangerous levels of green hypocrisy. It is an outrage that the Guardian has chosen the energy giant E.ON as a sponsor for the event, as the company is currently pushing for planning permission for a new coal power station at Kingsnorth in Kent. A new coal power station at Kingsnorth will rule out the UK's ability to stop catastrophic climate change.

This summit is greenwash of the highest toxicity. E.ON is a one of the UK's biggest climate criminals for trying to build a filthy coal power station just at the time science says we have to leave fossil fuels in the ground.

E.ON is spending a lot of money trying to paint its dirty deeds as green. But we will confronting their lies, at conferences like this one, at the Camp for Climate Action, and wherever else EON is committing climate crimes. We'll do whatever it takes to shut down Kingsnorth - permanently.

Where to go: meet in front of the Business Design Centre, 52 Upper St, London N1 0QH

info@climatecamp.org.uk if you need accommodation the night before)

What to bring if you can: a white painter's suit and home-made greenwash detecting equipment (eg. part of an old hoover, a remote control, a hair dryer painted green – get creative!) If you can’t bring these things, not to worry, extras will be on hand. And bring your dancing shoes 'cause there will be a soundsystem too!