On the back of the brilliant news that Raymond James (Eagle Asset Management) had sold their 500,000 odd shares in HLS, the day started with a letter from them confirming this. This was a fantastic result after only approximately 2 weeks and 5 demonstrations. HLS's shareholders predominantly exist solely in the United States, so shareholder targets in the UK are few and far between. However, just 5 minute walk from Raymond James is Old Mutual, of 2 Lambeth Hill. Old Mutual own a company called Acadian Asset Management who have about 15,000 shares in HLS. 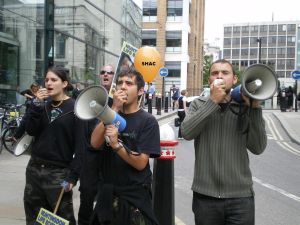 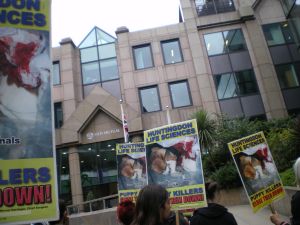 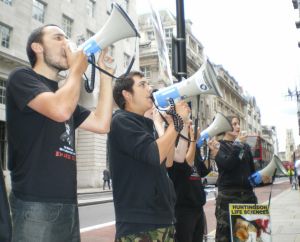 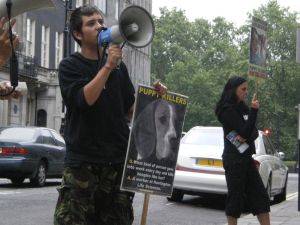 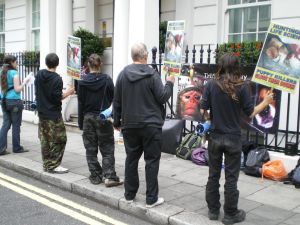 With about 18 of us, we arrived at Old Mutual. We hadn't demonstrated for more than about 5 minutes before a couple of members of SHAC were invited into the building to talk about why we were there. A most welcome change from almost all the other companies who generally order more security to prevent a dialogue taking place. Obviously Old Mutual are a bit wiser and haven't been coerced by the mass media into thinking we're unreasonable people. After a constructive talk with a couple of senior members of staff, we explained what we wanted (them to sell HLS shares) and explained that the demonstrations would continue until they do. The tone of the whole conversation was very positive though and it would not be a surprise if these shares were sold in the near future. We still proceeded to demonstrate at Old Mutual, explaining the horrors of Huntingdon Life Sciences. We stayed about an hour and a half.

Then we moved on to a couple of more familiar locations, Goldman Sachs and AstraZeneca. Goldman Sachs were first and we shamed them for their involvement in HLS through their ally NYSE/Euronext. We demonstrated at this location for about 1 hour or so before moving off to AstraZeneca.

At AstraZeneca we demonstrated for about an hour again, telling staff, nearby workers, passers-by and a couple of police officers exactly what a disgusting company AstraZeneca are in continuing to use HLS to test their dodgy drugs.

SHACtivists continue knocking out shareholders one by one!