At USAF Mildenhall today, activists linked to the climate camp made a surprise appearance. Dressed as military aircraft and traffic jam both with CO2 technicians. They attempted to entertain whilst defiantly educating the troops and passers by. They said they where there to raise awareness of the large CO2 emissions created by Military aircraft. 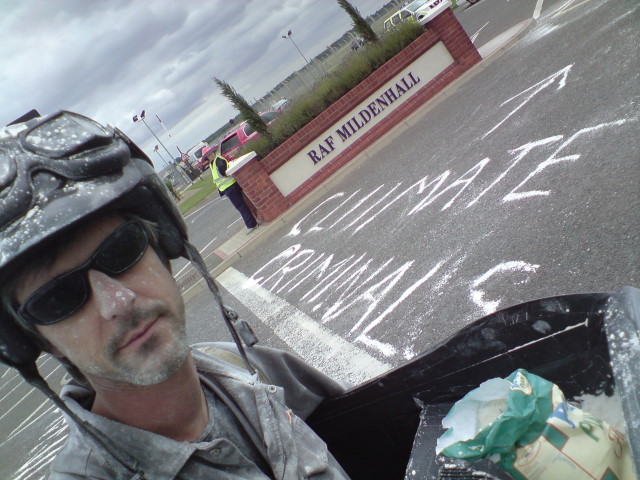 Message to the Base. 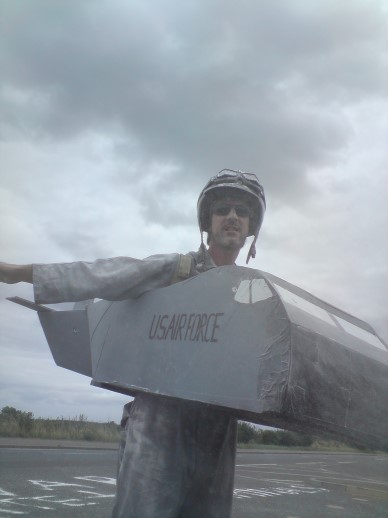 KC 135 refueller surrounded by a fog of its own pollution. 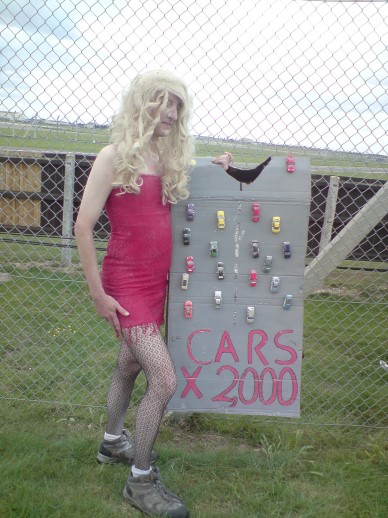 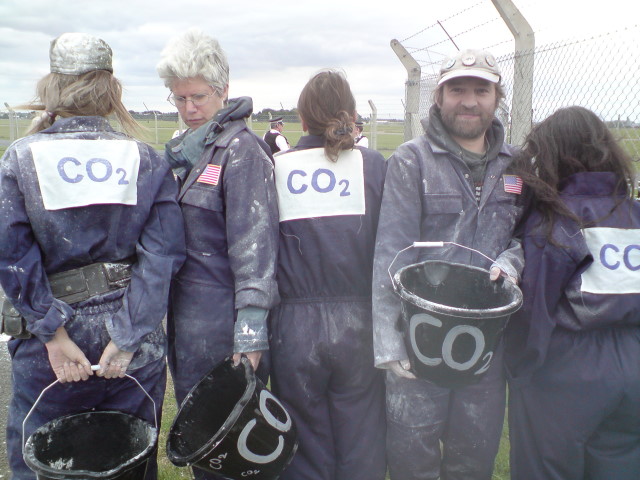 CO2 technicians and their 'Carbon buckets' 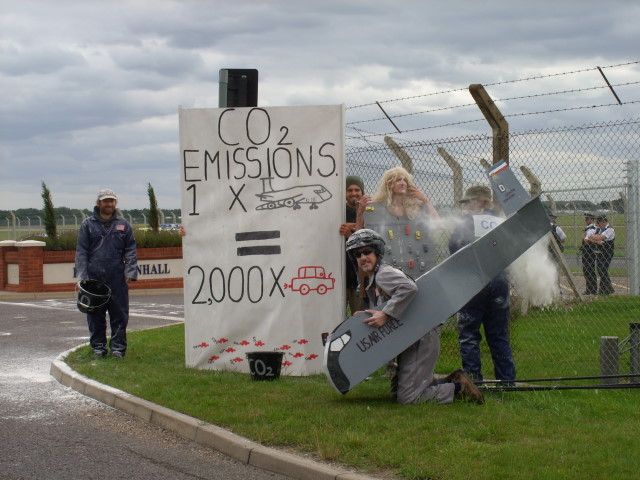 
A single KC135 plane uses 44 gallons of fuel per minute, emitting approximately the same amount of CO2 as 2000 cars. The planes are used for air-to-air refuelling and can carry 30,000 gallons of fuel – enough to drive a car over 30 times around the earth.
One of the activists, Mell Harrison said ‘We are here to show that military aircraft are not only committing war crimes, but climate crimes also. You very rarely hear about the vast amounts of CO2 emitted by the military and at a time when all should be accountable for their carbon footprint now is the time to put our efforts and resources into tackling climate change not fighting wars over oil resources. ’

Whilst dressed as an ‘alluring’ car sales girl, Pete Lux said, “Even if you do not believe that the wars in Afghanistan and Iraq are counter productive as we do, there is still the large amount of unnecessary flying. Often the planes will do ‘touch and goes’ where they land and then take off several times. This is a needless emission of carbon dioxide, in fact during the 2 hours of our presence here we have had the same two aircraft taking off and landing continually. ”
Mildenhall is one of the major logistic bases for US Air Force and plays a major role in supporting combat aircraft in both Afghanistan and Iraq. US planes carry out about 40 ‘close air support’ missions every day in Iraq and a similar number in Afghanistan. Each KC-135 flies on average, for 435 hours each year. There are 15 KC -135s at this US base alone. This results in over 160 million Kg of CO2 per year.

Whilst at the US air base somebody with the group was told by a female Suffolk police officer that if she did not tell them who they were, how long they would be there and numbers expected, she, as the ‘nice police’ , would have to call in ‘ the ones with shields and dogs’. So looks like the police tactics of the last few days continue……
We did not see any puppies though.

As Climate Camp finishes, the group say that the campaign against climate criminals will continue all year round.