Once again we arrived on AstraZeneca's doorstep early on a Monday morning. Two small groups leafleted at both of AstraZeneca's entrances. AZ continue to write the death warrants for innocent animals in HLS. As staff arrived at work we were there to remind them that while they were enjoying their weekend, animals were suffering and dying in HLS because of their company. 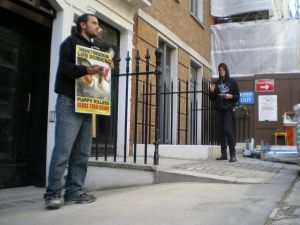 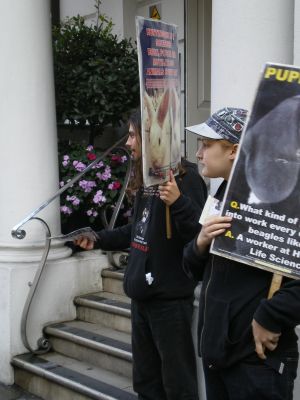 AstraZeneca's staff are a strange bunch of people. Who knows what they have been told by their security, management or the police, but they seem to have developed an illogical fear of leaflets! Some of their staff loitered outside the building when they saw that people were leafleting outside it, comically changing direction at the moment of realisation. Some were seen walking passed the building about 5 times! Some were seen making phone calls while standing out in the cold right outside the building, presumably asking "How the hell do we get in!?" Err... how about the same way you always get in: through the door!

We were told that the AstraZeneca security were actually calling staff before they got into work, which is not an easy operation for a handful of security guards. They succeeded in creating a near-chaotic situation from something that needed no reaction at all. It goes to show that AZ will go to extraordinary lengths to prevent the truth from reaching their own staff.