Kingsnorth: Activists use climate change as defence for £30,000 tower

This week six Greenpeace activists charged with causing £30,000 of criminal damage to a power station have been on trial at Maistone Crown Court. Its a key case because they are arguing that although they caused damage it was criminal because it was necessary to prevent greater damage to property caused by the effects of climate change, specifically the Yellow River, the Larsen B ice shelf, rainforest in Amazon and Congo and properety and liveleihoods in Banagladesh and Sri Lanka. 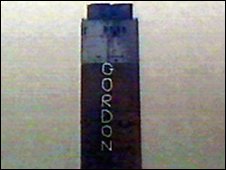 Five of the six activists scaled a 600ft (180-metre) chimney at the Kingsnorth coal-burning station near Hoo, Kent, on which they daubed the word “Gordon” before they were forced down by an injunction. (it would have said Gordon Bin It).

One of the world's leading climate scientists gave evidence on Wednesday and called for an immediate halt to the building of all coal-fired power stations to prevent catastrophic global warming.

Asked what his message to Gordon Brown would be, Hansen said: "I would ask him to make a clear public statement for a moratorium on new coal-fired power plants that do not capture CO2. There is enough potential in renewables for our energy requirements. The moratorium should be immediate. We do not need new coal-fired power plants. They all need to be phased out over the next 20 years."

Hansen, director of the Nasa Goddard Institute for Space Studies and a professor at Columbia University, said the man-made rate of change of atmospheric CO2 was 10,000 times greater than natural.

He warned that 1m species would be made extinct because of climate change and calculated that Kingsnorth, which emits 20,000 tonnes of CO2 a day, would be responsible for 400 of these. He told the jury that sea levels were rising at a rate of 3cm per decade, twice as much as the rate in the 20th century. "[If nothing is done] we would be handing our children, our grandchildren and the unborn, a situation that would be out of their control".

He said he agreed with Al Gore's statement that more people should be chaining themselves to coal-powered stations.

Tackling the issue of why one UK plant was so important, when China and India were building large numbers of plants, he said the UK, US and Germany were most responsible for today's climate change on a per capita basis. He said: "We have to get the rest of the world to cooperate but somebody has to take the lead."

The case continues and a verdict is expected early next week.
Taken from various other sources.