With the world of finance far calmer than this time last week, our demos did not generate such a big external interest as then, but we were still outside the same companies shaming them for their involvement in the torture of animals inside the razor wire of Huntingdon Life Sciences. We targetted Barclays, Axa and Merrill Lynch to demonstrate against. 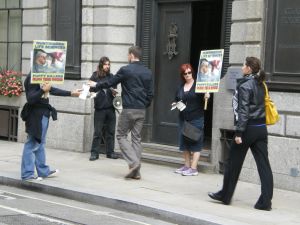 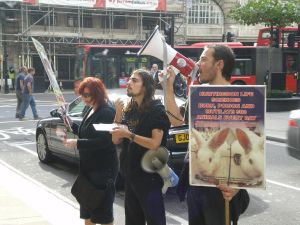 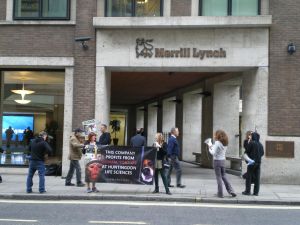 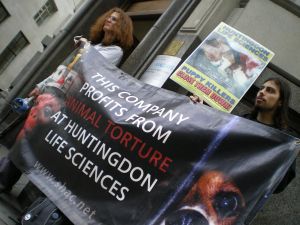 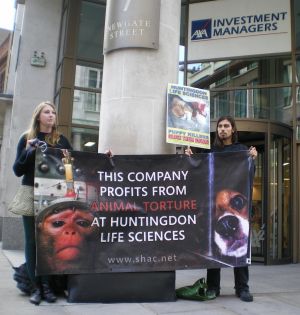 We started our day of demos at Barclays at 1-7 King Street. This is not only a Barclays branch, but also a good deal of Barclays offices are based here. We covered both the staff and branch entrances which really seemed to irritate the Barclays security. He even said "I'm watching you!"... ooh we're scared!! We stayed at this disgusting multinational, who have large numbers of shares in both HLS and NYSE Euronext, for just over an hour before moving onto the next one.

Merrill Lynch, following last week's takeover, was tactically chosen to be our next demonstration. We wanted to make it very clear to the new management that if you deal with HLS you deal with us! Merrill Lynch have about 11,000 shares in HLS itself and have a large number of shares in NYSE Euronext as well. We stayed at this location for about three quarters of an hour.

Almost opposite Merrill Lynch is Axa, the second largest shareholder in NYSE Euronext with approximately half a billion dollars worth of shares! That means a whole lot of influence if they decide to use it. HLS would be history if Axa so much as mentioned it to NYSE Euronext, but they are far too interested in money to even consider making such an ethical step as that. A couple of members of staff actually came to talk to the protest group, insisting that their 7,000 HLS shares had been sold, but we are far more interested in their NYSE Euronext shares. Sell those and the demos stop. In fact, sell those and we'll bake them a nice vegan cake!!!

We ended the demonstrations at Barclays on Fleet Street. This branch absolutely loves the demonstrations outside and we didn't disappoint. As with the other 3 demos, we used megaphones to tell the staff and all around that they're dealing with torture and death with their dealing with HLS. 70,000 animals are in there because of greedy companies like these 3 today. No customers, no suppliers, no shareholders: NO HLS!

Until next time, SHAC (City of) London