What do a Distraught Bengal Tiger, a Sacked Financial Analyst, a Homeless Polar Bear, and a Jobless Banker all have in common? Why they're all victims of the Carbon Crunch - the conflation of Capital's toxic Carbon Addiction and it's self-made Credit Crunch. Oh, and they're also all characters in a protest drama played out at the Olympia Exhibition Centre between some radical smart cookies from...
• People & Planet -

For permission to copy and use, see 'CopyLeft' at the end of the story below the photos.
For links to the other sets of photos, see one of the comments at the foot of this page. 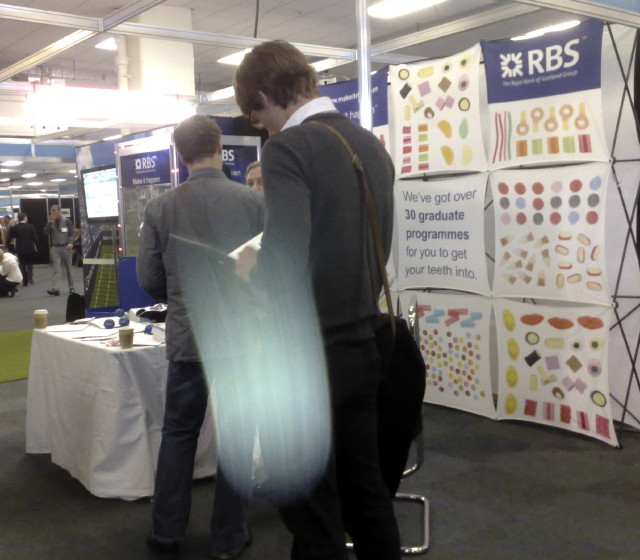 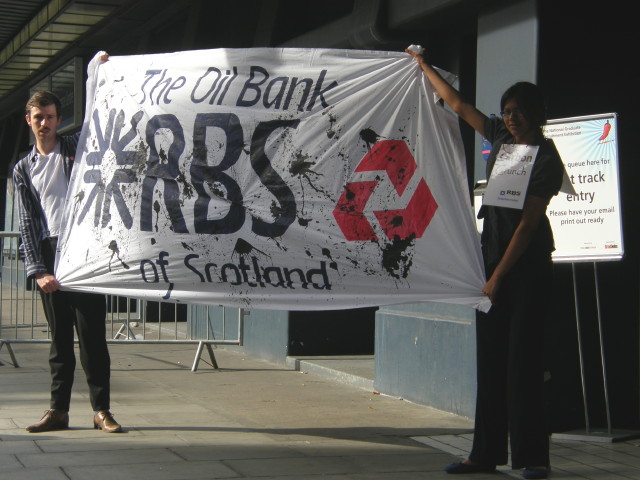 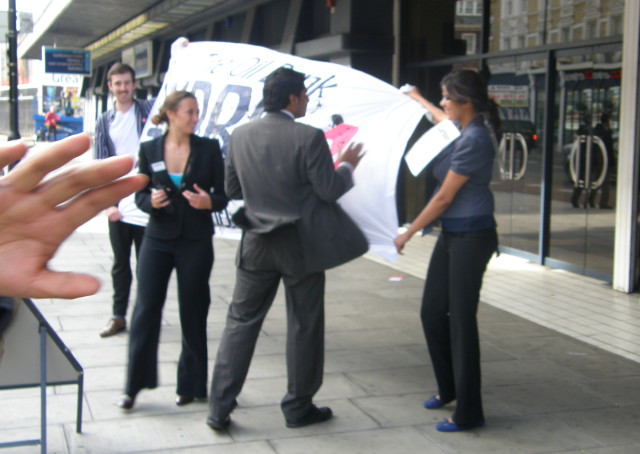 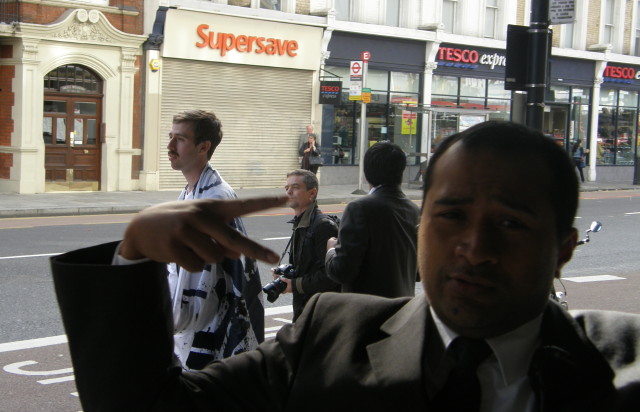 B3. Security Censorship Gets Silly 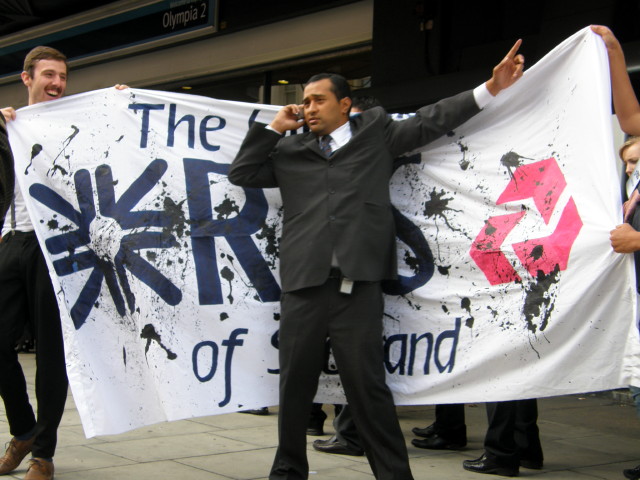 B4. Security Censorship Gets Laughable.jpg 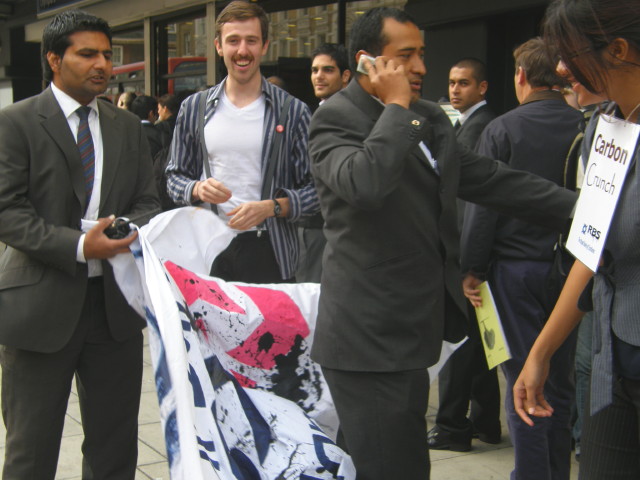 B5. Security Censorship Gets Tedious 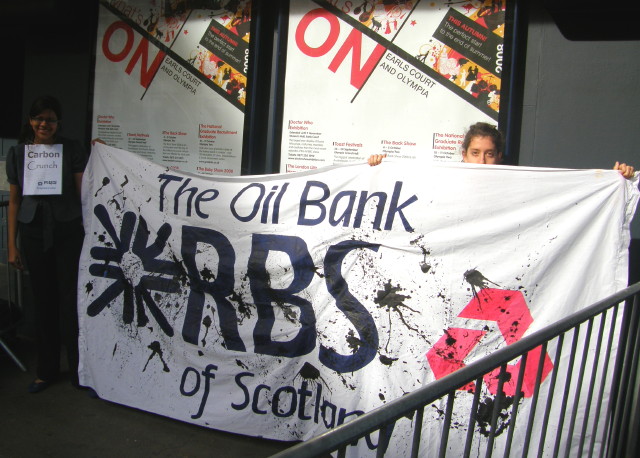 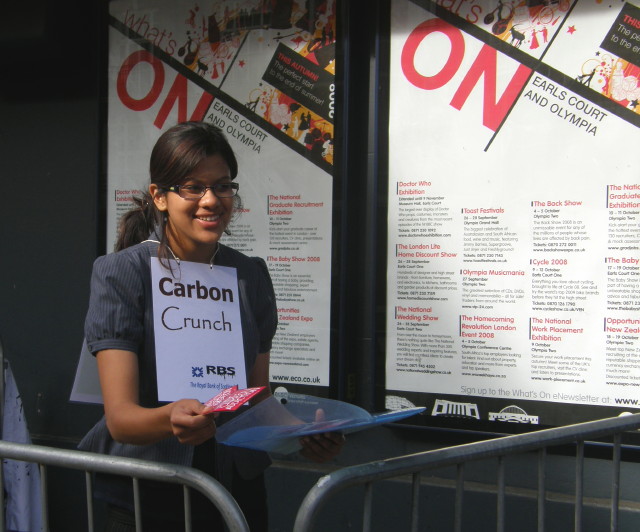 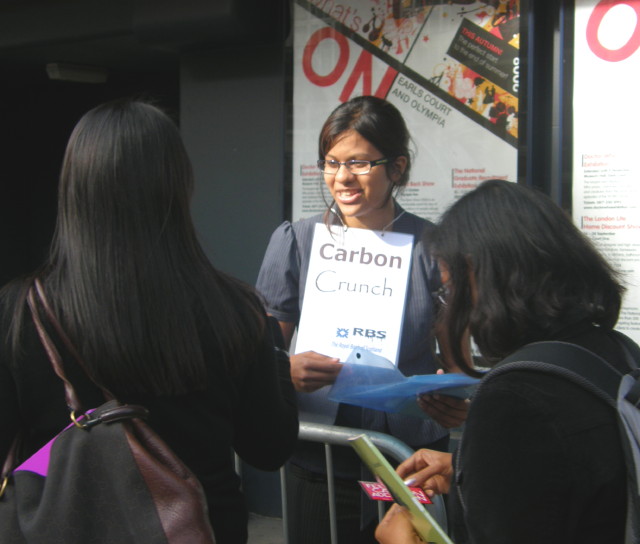 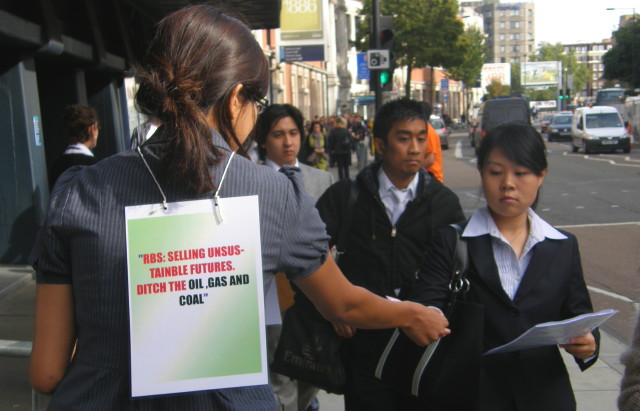 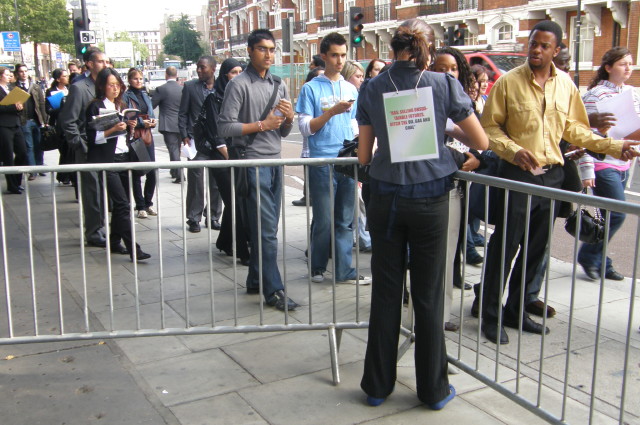 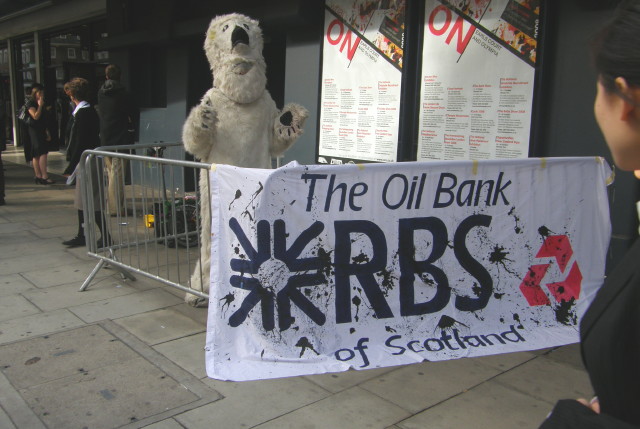 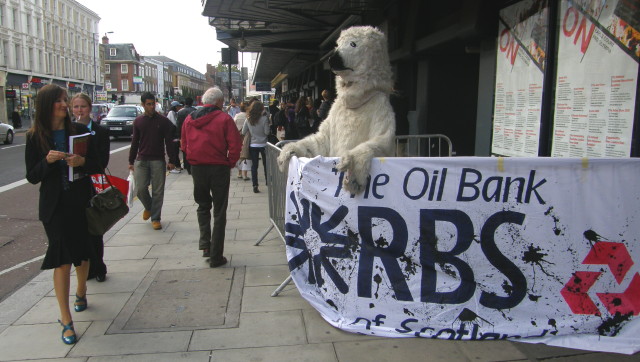 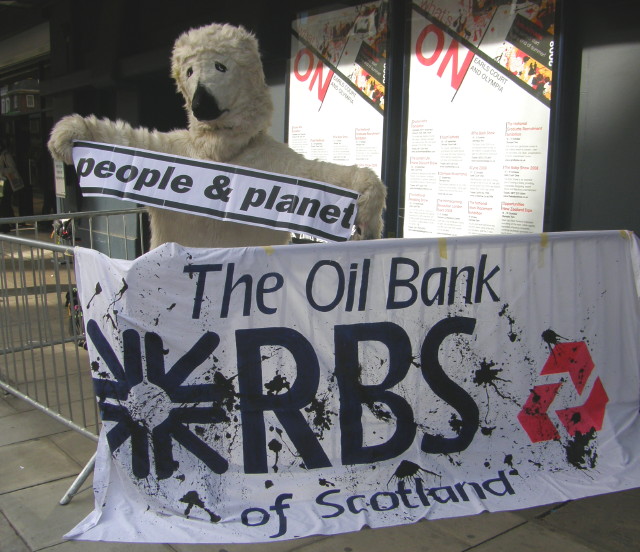 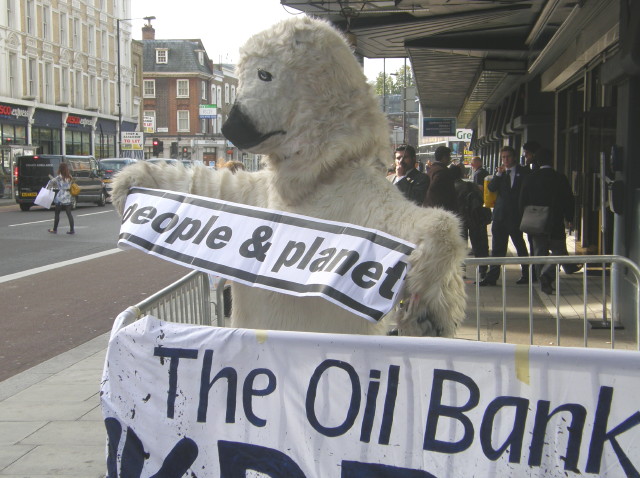 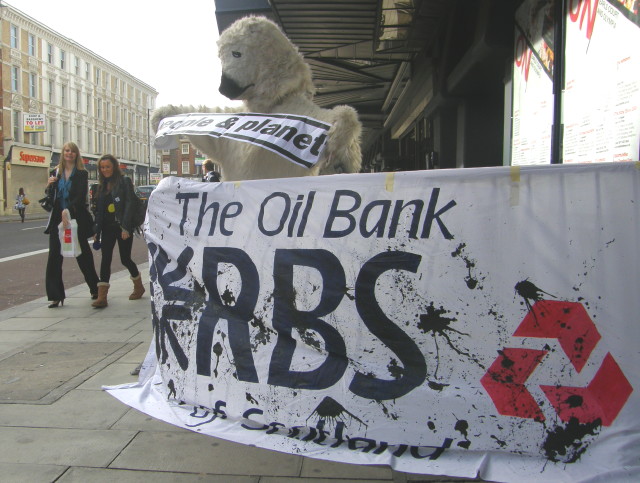 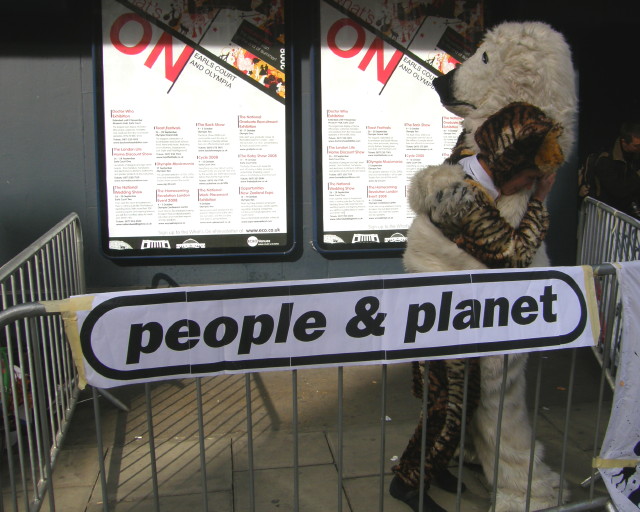 You know how Finance Capital oils the wheels of industry? [1] Well one UK bank excels above all others at oiling the wheels and greasing the axles of the Climate Criminal's Juggernaut - and my, how proud they used to be about doing so. Once upon a time, there was a website called www.theoilandgasbank.com - a product of the Oil Bank of Scotland (who prefer "Royal Bank of Scotland") - but in Jun 06, RBS took it down and stopped using this title publically. But why? This was the first major victory in a campaign waged since early 06 by a coalition of environmental NGOs (including Friends of the Earth Scotland, People & Planet and PLATFORM) to wean RBS of its toxic addiction to financing the climate criminals of the fossil fuel industries, and set it on a healthy diet of financing renewable energy initiatives: The Oyal Bank of Scotland Campain. [2]


THE OIL BANK OF SCOTLAND

"In 2007 RBS supported the fossil fuel industry with over $7 billion, while the bank's embedded emissions passed 50 million tonnes of CO2 – more than Scotland."
PLATFORM, in 'NGOs slam RBS for fossil fuel financing on the eve of delayed Corporate Responsibility Report launch', 10 Jul 08 -

Yes, you did read that right - one bank in Edinburgh is complict in MORE climate pollution than the ENTIRE NATION of Scotland!

"RBS-NatWest is driving climate change and feeding carbon addiction faster than any other British bank. Pouring billions into fossil fuels and working intimately with oil corporations, the bank is locking huge emissions into our future. People & Planet and PLATFORM are campaigning for RBS to recognise its climate responsibilities and move its money from the dirtiest fossil fuels into sustainable energy.

OUR DEMANDS
We are calling on RBS-NatWest to:
• Accept responsibility for the climate impacts of its lending. Calculate and publish the embedded emissions resulting from loans to oil and gas projects.
• Adopt a comprehensive climate change policy, including a target for annual reductions and the strategy to achieve this.
• Rebalance its lending portfolio away from fossil fuels and towards renewable energy. Immediate halt on all loans to coal and tar sands."
Oyal Bank of Scotland Campaign -

http://www.makeitrbs.com (although it's foundations are as dodgy as its fossil fuel addiction - clicking any 'programmes' link on the 'Programme Selector' produces: "Page not found!")

We thought we'd better alert attendees at the National Graduate Recruitment Exhibition at Olympia 2 that the recruiters on the RBS stand were consealing the fact that their hands were covered in oil. But with one reconnaissance photo taken and a few leaflets handed out, we were escorted from the Exhibition Hall by shitty-brown suited security drones. Unveiling our banner outside led to some very silly cat-&-mouse antics, with one of said drones trying to stop two snappers shooting his fellow drones attempts to censor a peaceful pavement protest!

Seems the cops had tipped of their Security Head Honcho (one v v unhhappy bunny) to our arrival, so he'd had constructed a three-crash-barrier cage to try (in vain) to contain us. Perhaps by stupidity (or maybe as a secret expression of sympathy? teehee ;-) our cage provided perfect banner mounting facilities, and was perfectly positioned to engage the captive audience of career seekers queueing up to get in.

While reconnoitering the RBS stand, I picked up two toys for my nephews, archetypes of corporate brading arrogance - wind-up squishy walking globes of planet Earth emblazoned with the RBS logo. This was on Black Friday, the last working day of a week that saw RBS shares have 40% of their value wiped out in Credit Crunch recriminations. Here's hoping the shambolic rout of Finance Captal will refocus the minds of the RBS Fat Cats on bequeathing to their own young relatives a bioshere still rich in biodiversity, and stll fit enough to sustain humanity's urgently required low carbon economy.

You can also read about our action in an illustrated report by People & Planet media and communications volunteer, and member of Westminster Uni P&P, Amani Ashraf -

Meanwhile, YOU TOO can help to shape our energy future - by telling RBS to stop fuelling carbon addiction:
• Take Action on RBS: The Oil Bank of Scotland -

Neither the International Court of Justice nor any other bourgeois court will put huge dirty corporate Finace Capital bodies like RBS in the dock for aiding and abetting the Climate Criminals in the fossil fuel industries. So its down to us to band together and force RBS OUT of fossil fuel financing and IN to sustainable renewable energy development - join us, and take positive actions to safeguard our planetary future.

[1] Finance Capital oils the wheels of industry - at least it did until Capital's historical Crisis of Overproduction [3] found expression in the Credit Crunch, toppling the huge Wall Street domino Lehman Brothers on 15 Sep 08, since when Finance Capital's lubrication services have all but ceased in a paroxysms of fear and recriminations.

[2] The Oyal Bank of Scotland Campaign -

http://www.oyalbankofscotland.com is the successful campaigning website of the anti-RBS coalition of environmental NGOs, including:
• People & Planet -

http://www.platformlondon.org
• Friends of the Earth Scotland -

[3] Capital's historical Crisis of Overproduction: "what characterises the 20th and 21st centuries is that the tendency towards overproduction - which in the 19th century was temporary and could easily be overcome - has become chronic, subjecting the world economy to a semi-permanent risk of instability and destruction. Meanwhile competition - a congenital trait of capitalism - became extreme and, crashing up against the limits of a world market which constantly verged on saturation, lost its role as a stimulant for the expansion of the system, so that its negative side as a factor of chaos and conflict came to the fore." ~ ICC, in 'Capitalist Economy: Is there a way out of the crisis?', translated from Accion Proletaria 199, the ICC's publication in Spain, Jan-Mar 08 -

All these photos are 'CopyLeft'.
This means you are free to copy and distribute any of my photos you find here, under the following license:
> Creative Commons Attribution-Noncommercial-Share Alike 3.0 Unported License
>

Links to both photo sets for this event