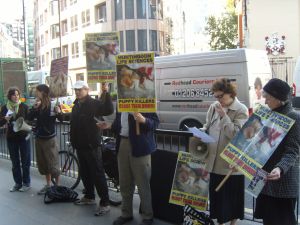 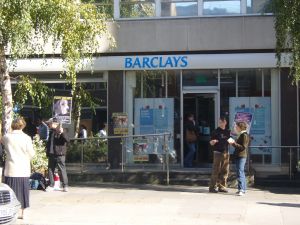 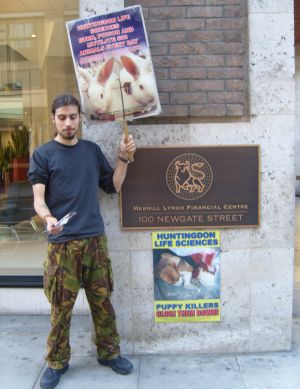 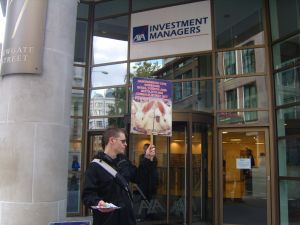 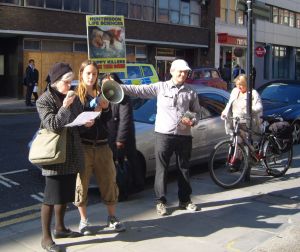 We began our day of demos at AXA on Aldgate Street. They're currently the second largest shareholder in the New York Stock Exchange and still own a handful of shares in HLS itself - around 7,000. We shamed this company for their financial support of Huntingdon Life Sciences for around an hour before heading off to our second target...

...the Minories branch of Barclays. This is a busy place with a lot of people walking around. We got there at the perfect time - there was a huge queue to use the cash machines which rarely got much shorter. As the current top shareholder in both the NYSE and HLS, Barclays were shamed for over an hour, getting a lot of attention from members of the public.

Merrill Lynch on Newgate Street was the third target today, as one of the top shareholders in the NYSE and holders of over 11,000 shares in HLS as well. I must be amagining it, but I'm sure I've seen footage of someone from Merrill Lynch saying, many years ago, that HLS was a bad investment and they would not go near them if they were the last company on earth. Over 11,000 shares now Merrill? It truly will turn out to be a bad investment. Sell you shares, put pressure of the NYSE, make the right decision!

Just across the road was another AXA office. They predicted what was coming and had a security guard standing outside the whole time we were at Merrill Lynch. As we'd already been to an AXA earlier in the day, we did a shorter demo of about 25mins. It can be a pretty good place to hold a demo as the sound of the megaphones echoes around their entrance quite a bit.

Just as we were finishing off the demo, a guy came out to talk to us. He said that AXA are getting rid of their shares in HLS along with those in the arms trade and all other "unethical investments" because they want to be seen as a responsible company. Well, do something responsible today AXA and put pressure on the NYSE to de-list Huntingdon Life Sciences. You're fully aware by now of the cruelty and the torture that goes on inside those labs, as well as the criminal activities, and that HLS's shareholders are central to their survival, so help us to close HLS down for good!

The SHAC trial has recently begun. We'll continue the struggle out here on the streets, thinking of those who should still be out here with us.

Until all are free.

Get ready for the week of action at the end of the month!