The original intended occupation site of Occupy London - Paternoster Square - adjacent to the stock exchange, has been occupied by Occupy London on Mayday since around 6.45pm 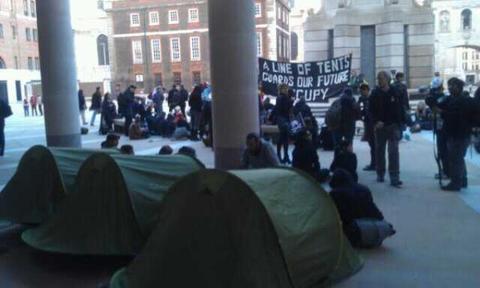 They're calling for people to get down there as soon as possible and intend to hold a generral meeting.

A City of London police (chief?) inspector has been informing people that the injunction (against protest/camping) is still in place - he is obtaining a copy in order to inform all the other people who are there that there is such an injunction.

At least six tents are set up and another with the maypole is atop one of the high plinths in the square - cops say the person won't be arrested if he comes down before they make arrangements to bring in a cherry picker.

22.18 cops announce "time for section 14 has now passed - there is an opening in police line and you are now able to leave if you do not leave this area you will be arrested"

2215 announcements re injunction in force - some ppl sitting in defiance, others still refusing to leave area standing

22.10 cops announce "final msg if you do not leave you are liable to arrest"

22.09 Some ppl moving away from stock exchange

9.40 cop addresses crowd: "this is a msg for everybody in paternoster square... I believe there is serious disruption to the community and so under 1986 public order act I am imposing conditions on your assembly. you have 30 minutes to leave the area."

9.30 much higher level of police there now - discussions re resisting what looks to be fairly imminent eviction by cops 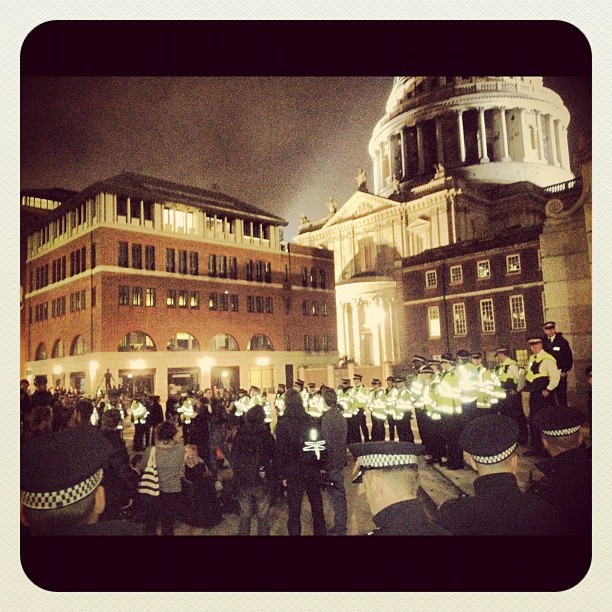