to mark the anniversary of the occupation outside london stock exchange and to show solidarity with the global noise event, a few hundred people met again at the steps of st paul's, and during the afternoon they took to the streets for a walk around the city. 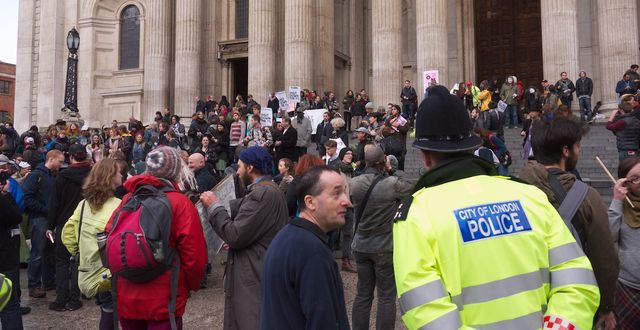 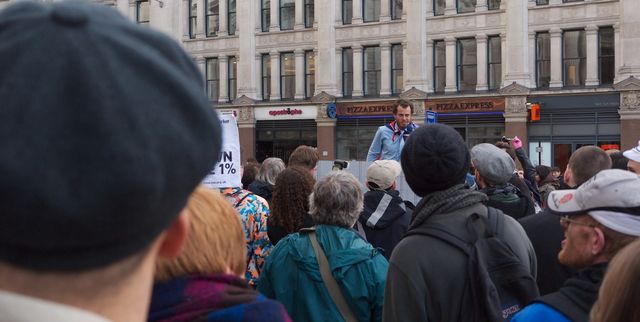 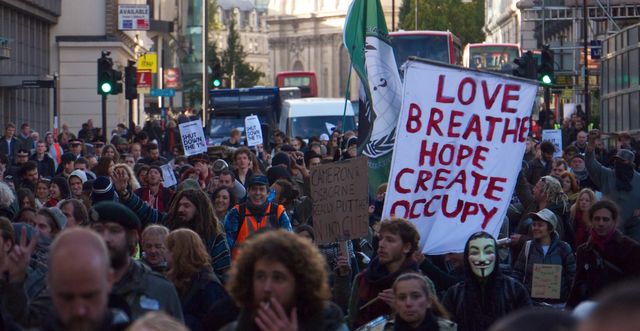 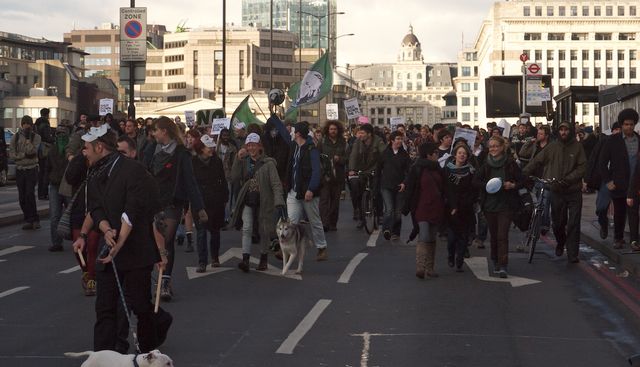 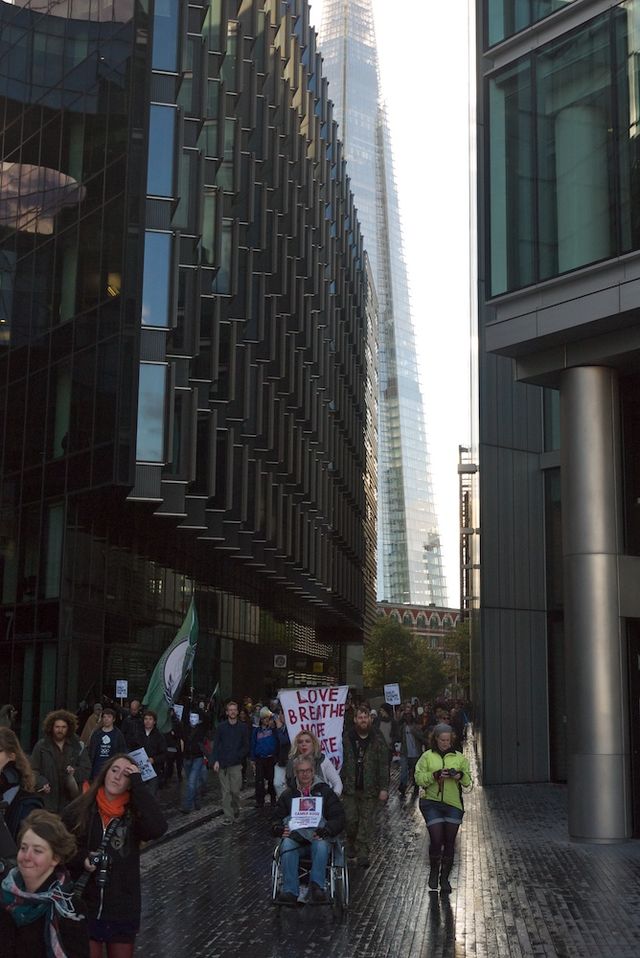 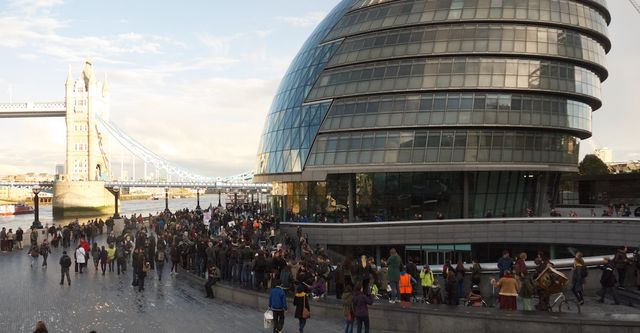 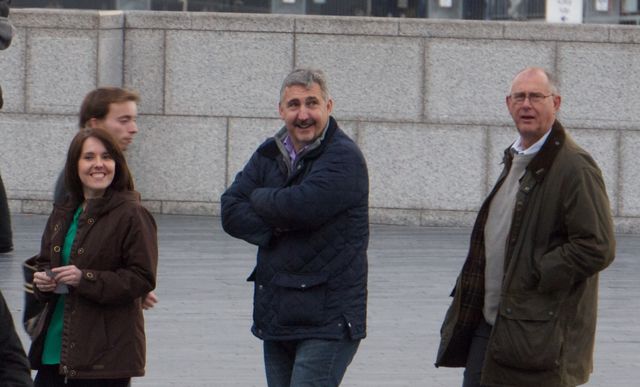 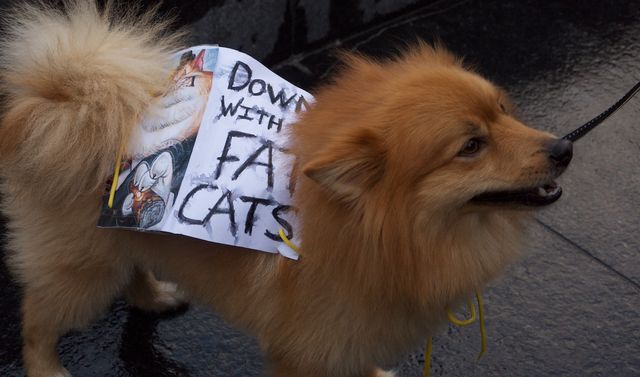 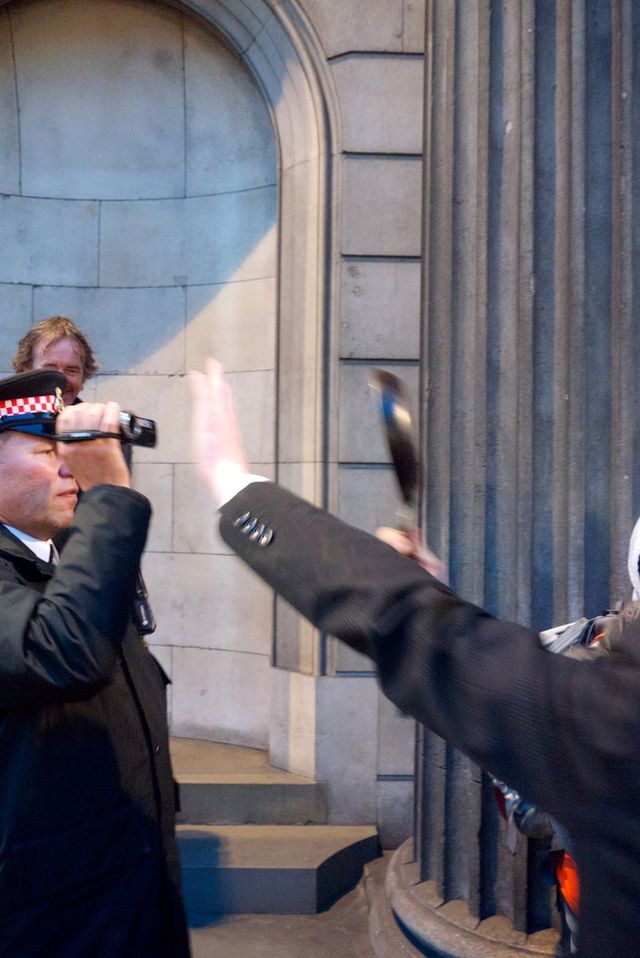 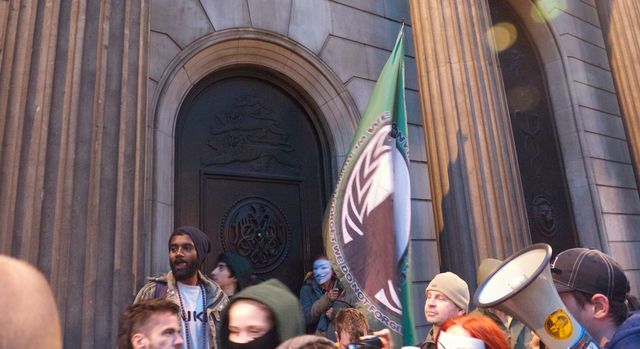 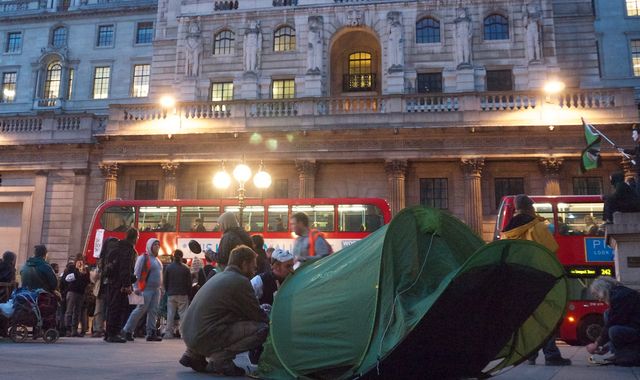 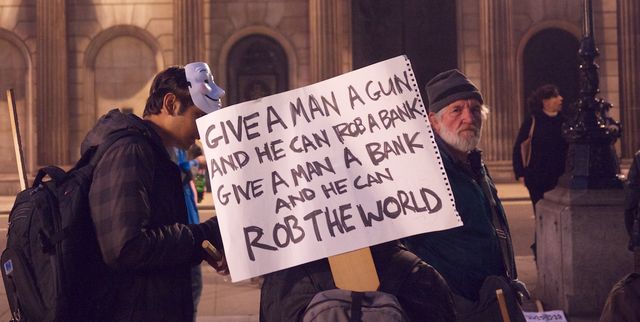 pics are 'some rights reserved' - free for credited non-commercial use, otherwise contact author for permission
-----
the event was publicised as an anniversary get-together to be followed by a new two-day occupation at a secret location. on the day however, that second part didn't actually take place for whatever reasons.

i arrived after some music, poetry and speeches, just as a mock city gent, standing on a cardboard skyscraper, told the crowd he'd changed sides and seen the light, and knowing where the skeletons are, he invited the crowd to follow him for a look round the city.

so, followed overtly by a handful of city police, and less obviously by several police vans containing back-up, a group of several hundred people set off east into the city, reclaiming the streets and junctions on their way. a small samba band including Sambatage and rhythms of resistance players, added to the noise of pots and pans that people had brought along.

at some junctions it looked like 'critical mass' decision making, but sometimes it also seemed as though a handful of people had a plan of sorts and presumably a destination.

in my imagination, i expected that a group of activists were securing a suitable site, perhaps putting up tripods, and that our group was being led to join them within minutes of that happening. but, after going over London bridge and heading east along Tooley Street, while it seemed the GLA city hall might be the target, there was certainly no preparation there.

some people descended into 'the scoop', an urban amphitheatre next to the GLA pod, and for a while a mic was set up, and the area was decorated with posters and selection of great photographs relating to the occupy movement.

a few police looked on, one filming with a small camcorder. also watching were three characters seen before on the 'carnival of dirt' protest back in June (

http://london.indymedia.org/articles/12416). they continued to follow Saturday's protest till its end. it's believed they work for a private intelligence company on behalf of either the city of London corporation, or other large financial bodies.

although there was sight of a tent, and some people had sleeping bags, an open mic speaker suggested we move on, and critical mass style, enough people began and many followed, so that a group of a couple of hundred headed back north over tower bridge, and onwards to the bank of england and royal exchange.

there a small party began, one tent was erected, and banners flew. one of the cops tried to film a group standing at the door to the bank, and but some occupiers 'fitwatched' him until he moved on.

as well as the three city spooks, sitting on the bench, regularly phoning their office or superiors, another two plainclothes characters joined us. these two looked like cops, with shiny new trainers and their adidas hoodies - lol. their details have been shared appropriately.

by about 8 the rain started to pour, and the remaining group of a few dozen activists headed off to a nearby squatted centre.

so, i didn't know what had happened to the secret plans, or whether they'd been shelved much earlier. but the day was a celebratory walkabout, unmarred by heavy policing, and though pretty ineffectual in the grand scheme of things, it brought a few old friends together and made its presence felt in and around the city on a Saturday afternoon.